In comparison with the engaging, comforting business which populated the
overture to The Bartered Bride the previous evening, the overture
foreplay which director Michael Boyd has devised for his new production of Don Giovanni at Garsington Opera unsettles and generates questions
and debate.

It’s both enigmatic and edgy. On the one hand, one asks what the visual
display has to do with the drama that one hears being prepared in the
orchestral overture; especially as Garsington’s Artistic Director, Dougie
Boyd, conducts the Garsington Opera Orchestra with a taut baton that whips
up real fire from the light chattering, then, with dramatic fluency, lets
the fierceness subside into flowing melody. Then again, the notion of Don
Giovanni as an ‘artist’ whose vision raises him above mere ‘mortals’,
granting him privileges and prerogatives which some might see as abusive,
is not an inapt trope for the modern age.

Designer Tom Piper places the action in Don Giovanni’s grand atelier;
spacious and airy, it would be the envy of many a struggling young artist.
Alongside the Pollock-splashes rest huge canvases ‡ la Manet and
Claude Lorraine – the latter are perhaps useful subsequently, in hinting at
the original ‘rural peasant’ status of Masetto, Zerlina and their buddies.
Painters’ scaffolding protrudes behind the framed masterpieces and will
later emerge like a children’s giant climbing-frame.

The opening is striking and thought-provoking. The challenge, though, is to
sustain the concept, and here almost immediately the dramatic continuity is
broken, when Don Giovanni emerges clutching Donna Anna, who seeks to evade
his predatory embrace, and not Donna Elvira, who had so obligingly joined
him behind the canvas.

For a while, Boyd tries to sustain the metaphor. The Commendatore appears
wearing what look like pale-blue pyjamas (the sun is blazing outside the
Garsington pavilion) and is promptly murdered by the splattering emissions
of a fire extinguisher filled with crimson-red gouache … it certainly looks
very bloody, and there’s lots of mopping up for Leporello and Don
Giovanni’s black-clad protection-officer heavies to turn their brooms and
sponges to (doubtless health and safety intervened here, too). 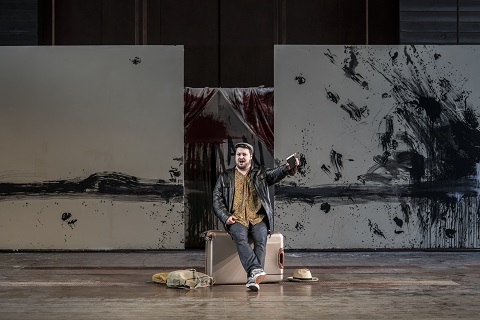 Thereafter, though, art – in a visual sense – is largely forgotten and we
return to da Ponte’s original tale. This would-be Andy Warhol or Damien
Hirst wears a red and gold brocade coat and, the masked trio tell us, is
armed with a sword. Admittedly, the Don whips out a camera to entice
Elvira’s maid down from her balcony – references to Mario Testino, Terry
Richardson and Bruce Weber et al, here, perhaps? And, the grand
masterpieces serve as a graffiti playground when, during the dancing and
drinking they are crudely defaced with black paint. In Act 3 the
Commendatore’s gravestone is a grey-white canvas upon which Donna Anna
daubs: “Here I wait for vengeance on the faithless man who murdered me”. As
night draws in during the second half, there are chiaroscuro effects
(lighting – Malcolm Rippeth) of which Caravaggio would be proud.

But, on the whole, the concept languishes. And, there’s little direction of
either soloists or chorus: the wide Garsington stage is a big space for
singers to be left standing about. In the catalogue aria, Elvira and
Leporello simply squat on her silver suitcase and look through the Don’s
little black book. In ‘L‡ ci darem la mano’, though the shortening, then
overlapping, phrases of the music bring the lustful Giovanni and the
tempted Zerlina ever-closer, here we they keep a tense distancing: a red
carpet is unfurled to lure Zerlina to the Don’s ‘palace’, but the
characters remain 20 feet apart; despite asking for Zerlina’s ‘hand’,
Giovanni seems to have his own in his pockets. 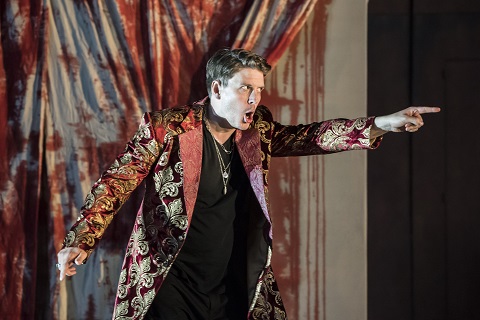 On the previous evening, the chorus scenes in The Bartered Bride
had been choreographed to crossed-‘t’ and dotted-‘i’ perfection but
remained naturalistically engaging. Here, the choruses were disordered and
the movements seemingly random: perhaps that was the intent, but the music
– in the dance sequences especially – speaks of patterns which represent
hierarchies, to be sustained or smashed depending on your political
point-of-view: “Viva la libert‡!” the masqueraders cry.

And, speaking of social hierarches, this is one aspect of the opera that is
dissolved by the artist’s paint stripper. Don Giovanni may tell Zerlina
that he’s a gentleman, but his swagger, tight black ti-shirt and silver
chain speak more of East End barrow-boy turned City trader. Jonathan
McGovern – last year’s

– gesticulates with a flourish, spins extravagantly and throws a mean
punch. He might be addressed as “His Lordship”, “His Excellency”, but he is
no aristocrat, though. McGovern sang with strong tone, a flexible line and
dramatic colour. Don Giovanni’s champagne aria may have been delivered at a
fairly steady tempo, but this ensured clarity and accuracy. But, this Don
is not regal or refined: in Act 3 he stuffs down fistfuls of the takeaway
chicken and chips that the put-upon Leporello has served up, smothering
them in ketchup seemingly dispensed from a giant paint-gun, with the same
reckless abandon with which he had killed the Commendatore. Nor is he a
‘seducer’; bully, braggart and bruiser, perhaps, but romancer, no.

Fortunately, the cast’s singing is accomplished. David Ireland’s Leporello
is beaten and abused – and such thuggery further coarsens his ‘Lordship’ –
but he sang with defiance and strong character. Ireland and McGovern have
quite a similar tone and range, which worked well when master and servant
swapped clothes: in the wooing scene, as he manically mimicked his
‘off-stage’ master’s gestures, Ireland introduced a welcome comic note into
this dramma giocoso. 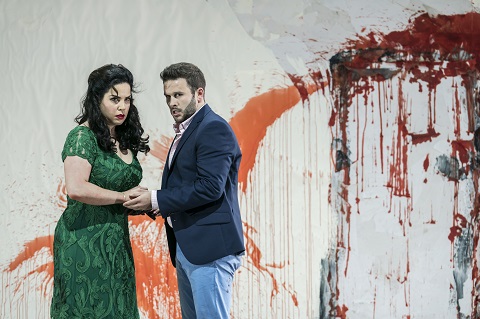 Trystan Ll?r Griffith’s Ottavio was a strong presence in the ensembles and
deservedly got to sing both of his arias, in which he demonstrated
sensitive variation and gradation of colour, warmth and strength: he earned
his rich applause. But, it was a shame that just as his second aria, ‘Il
mio tesoro’, in which Ottavio attests to his determination to make sure
that Donna Anna gets her revenge on her father’s assassin, had to battle
against the distraction of Donna Anna’s art vandalism, so during ‘Dalla sua
pace’ Anna’s entry into the audience-space and her ascent of the wooden
aisle risked diverting attention from the vocal prowess and sensitivity on
stage.

Camilla Titinger had some fine moments as Donna Anna, and these were warmly
appreciated by the audience; but there were some tuning problems, and her
projection was inconsistent: I found her less than communicative in the
recitatives and ensembles. That said, Donna Anna’s ‘Non mi dir’, though
perhaps a little slow, was expressive.

Mireille Asselin took a while to warm up dramatically as Zerlina –
initially it didn’t seem as if she had any genuine affection for Masetto or
real attraction to Don Giovanni – but when she got into her stride, she
found her musico-dramatic shoes and wore them with style. ‘Vedrai, carino’
was particularly persuasive and beautifully sung. Thomas Faulkner sang
strongly as Masetto, his fluency and appealing tone complementing Masetto’s
naivety and vulnerability.

Sky Ingram was a terrific Donna Elvira. She sang with a winning combination
of strong and colourful emotion and control of melodic line; ‘Mi tradi
quell’alma ingrata’ was one of the evening’s highlights. This was no
hysterical abandonata or a seria parody; this Elvira was
a real flesh and blood woman, very ‘modern’ in many senses, and sincere in
her desire to speak out and protect others. 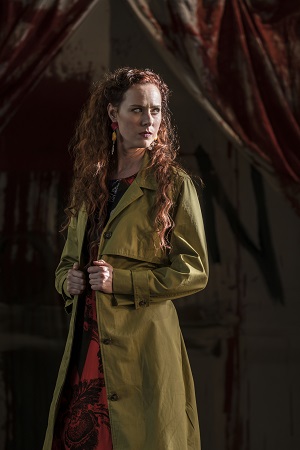 Paul Whelan’s Commendatore didn’t make much of a mark in Act 1 – perhaps
it’s difficult to be imposing when felled by a fire extinguisher. But, he
came into his own in Act 3, singing with refinement and ‘human’ feeling, if
perhaps lacking a little in menace.

The close, though, failed to make its blood-chilling mark. And, this was,
uncharacteristically, partly due to the slow tempi adopted by Dougie Boyd
in the final sequence of scenes. Perhaps we’re talking miniscule
‘measurements’ here, but from the moment when Leporello reports to his
master that the statue’s head has nodded, everything felt just a fraction
too ponderous, and dramatic momentum was lost. Deprived of the epilogue
‘motto’, the ending – Don Giovanni was dragged down to hell on a
backward-sliding painter’s ladder – was anticlimactic.

This felt like an opportunity lost. While Paul Curran the previous evening
had drilled everything to such perfection that we didn’t notice the
artifice, here the cogs chugged, sputtered and then ran out of steam.
Michael Boyd’s conceptual seed was not without promise, but he didn’t water
it with sufficient consistency or discipline to enable it to flower as it
might.