As a long-time employee of the Hapsburg estate, Gluck was required to
devise suitable entertainments for festive occasions. The celebrations for
the 1769 wedding of Ferdinand, Duke of Parma (who was the grandson of Louis
XV of France), and Maria Amalia, Archduchess of Austria (and sister of
Marie Antoinette) were elaborate, extensive and drawn out over several
months. Alongside feasts, a tournament, a Chinese fair and a display of new
scientific inventions, Gluck contributed an opera-ballet titled Le feste d’Apollo comprising a prologue and three acts on Ovidian
tales: Aristeo, Bauci e Filemone, and a revised and
shortened version of his 1762 opera, Orfeo ed Euridice. 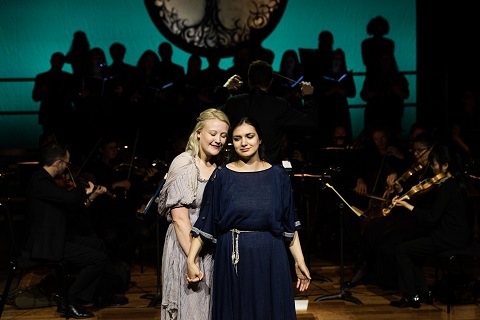 Classical Opera presented semi-stagings of the last two parts of the trio,
their performance of the 1769 score of Orfeo being the UK premiere
of this version. The pairing offered a good opportunity to hear the
development of Gluck’s style, the ‘conventional’ seria sequence of
recitative and aria in Bauci e Filemone evolving into a more
dramatic interaction of words and music in Orfeo.

Bauci e Filemone
tells of two young lovers, the eponymous shepherd and shepherdess, who show
great respect and care for the god Jupiter when he appears before them
disguised as a pilgrim. In return, the rustic couple are blessed by Jupiter
with everlasting life and elevated to the status of demigods. At the same
time, he curses their fellow Phrygians who had refused to help him. 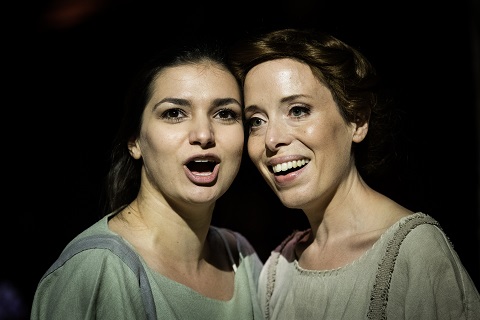 It’s a tender pastorale, which Wilkie and his designers, Emily Adamson and
Philly Noone, sought to convey by placing a thicket of distressed silver
birch trees at the side of Queen Elizabeth Hall stage and illuminating a
silhouetted tree on a backdrop swathed in a sequence of strong colours –
cerise, ultramarine, indigo. The action unfolded both in front of the
orchestra and behind, a raised platform lifting the cast a little higher
than the musicians.

The action unfolded gently, though the rather unflattering and
indistinctive costumes – all beige smocks and sandals – didn’t immediately
assist the ‘story-telling’, the shepherds being less than individualised.
But, the music charmed, with some especially vivid and dynamic playing from
The Mozartists. Lena Belkina’s Philemon and Rebecca Bottone’s Bauci formed
a dulcet-toned and convincing sweet-natured duo in Gluck’s inventive duets,
and Bottone confidently tackled Bauci’s stratospheric ascents in ‘Il mio
pastor tu sei’, firing out heaven-bound notes that hit their target every
time, the tone remaining true and full. Tenor Gwilym Bowen, looking every
ounce the golden-haired god once he had cast aside his hessian rags for
regal splendour, was a forthright Jupiter, relishing his ‘rage aria’,
though the accompanying flickers of light didn’t quite summon a vision of
celestial tumult and wrath. 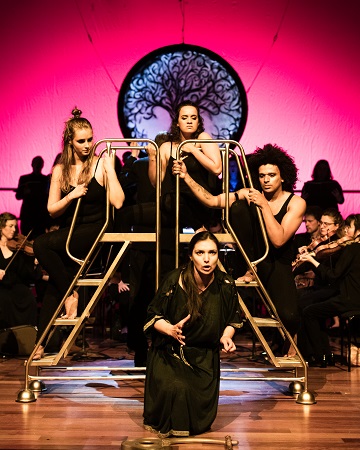 Kiandra Howarth sang her contribution as the Shepherdess assuredly, but had
more to do as Euridice in the ensuing Orfeo. For this second part
of the evening’s entertainment, Wilkie ‘enhanced’ the ragged glade by
wheeling on some cheap portable ladders by which Belkina’s Orfeo, clutching
a plastic lyre, would descend to Hades to rescue his beloved. Three actors,
who doubled up as stage-hands, offered an array of bodily gestures which
served a purpose that remained indiscernible and unfathomable to me. With
the action repeated retreating to the rear, it was fortunate that the
singers projected with strong characterisation and a persuasive sense of
Gluckian style. 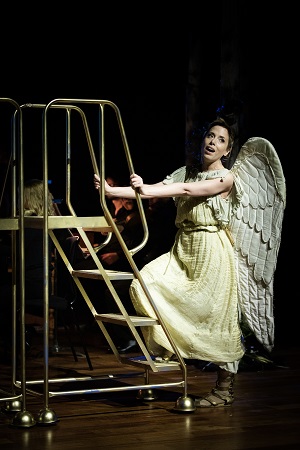 Dressed in a simple Greek tunic, Howarth expressively conveyed Euridice’s
suffering. Belkina’s performance grew in intensity, impressively capturing
the depth and diversity of Orfeo’s feelings. Bottone was a personable Amor,
though she was encumbered with a pair of outsize wings which, along with
the sliding stepladders and the flinging of gladioli about the stage,
seemed out of keeping with Wilkie’s generally respectful tone. The Chorus
added some of the vitality that was missing from the staging, and Ian Page,
without undue fussiness, coaxed some fine playing from The Mozartists.


in the same hall had used costume, minimal staging and strong lighting to
excellent dramatic effect. In this double bill, it was the music that took
centre stage. With such fine singing and playing, perhaps it was a pity
that we had not heard Aristeo too, giving us the opportunity to
experience the whole of Gluck’s festale. For, Gluck himself was
the star of this show.