And, its grungy recruits – chain-smoking, scowling witches-in-waiting – are
already masters of the arts of evil enchantment, luring the innocent with
striped bags of humbugs, Catherine-wheel lollipops and twinkling twigs
towards the Head of the Coven’s oven. They prowl menacingly during the
overture to this new production of Hansel and Gretel, as a
bright-eyed bunch of children are sent off into the woods. Their lumberjack
shirts may keep them warm, but Mother’s words of warning will be quickly
forgotten: the sweet treats strewn along the woodland path are all too
tempting.

Renewing their partnership with ENO (after last year’s

The Turn of the Screw

), Regent’s Park Theatre now present Humperdinck’s take on the Grimm
Brothers’ rite-of-passage tale of children abandoned, endangered and
ultimately saved by their own ingenuity, and Sheader keeps homeliness and
horror in good balance. 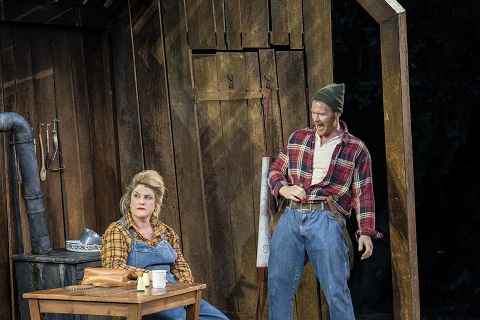 McKintosh’s set blends fidelity and fantasy with a sure touch. The stained
sink, wonky table and bare shelves in the family cottage reek of real
poverty, while the leaning walls have a fairy-tale tilt. During the
children’s journey through the bristly thicket, the cottage is transformed
before our eyes, deconstructed by the hovering hags until it’s just a
skeleton that merges with the spindly trunks. Their path lit by
fairy-lights blinking in the broom-branches, the children follow the
lollipop stepping-stones that lead to the Witch’s house: a monstrous
Battenberg cake, adorned with a swizzel-stick chimney and glace cherries glowing like warning lights.
The sight of this sugary edifice sends the starving siblings into a frenzy
of feasting, and they don’t notice the gingerbread men
fence-cum-gravestones, with their eerily glowing eyes, which guard the
mouth-watering mansion. Once inside, though, the outsize oven quickly
pushes pretence aside. 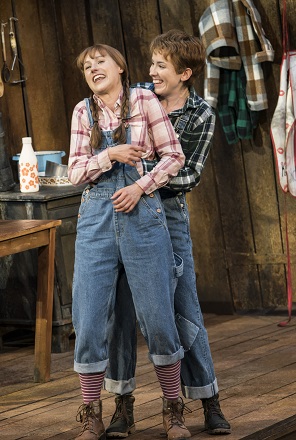 There are always going to be some compromises to be made in this venue but
in this production they seem a virtue. Some discrete amplification is
employed but it’s, for once, skilfully and consistently managed, and every
word of the text is clearly heard. Derek J Clark’s orchestral reduction of
Humperdinck’s opulent score is masterly: led by Janice Graham the
twenty-strong ensemble, seated behind a screen at the rear, play with
sparkle and punch, the seven string players forming a surprisingly
sumptuous blend and the woodwind and brass players doubling instruments,
enabling Clark to retain Humperdinck’s variegated palette. Ben Glassberg
conducts a slick performance in which ‘stage’ and ‘pit’ are in consistent
alignment: all the more remarkable given that, although there are numerous
monitors to guide the cast, the choreography is busy and at time stakes
them to the further reaches of the tiered auditorium.

Indeed, Lizzi Gee’s movement direction is superb. The children’s
rough-and-tumble antics; the dream sequence, in which the children really
do ‘take flight’ into fantasy; the delicate dancing of the en pointe duplicates of the dazzling Dew Fairy (He Wu), with
their ‘milk-bottles’ of dew droplets; the reawakening of the lost children
and the final chorus in celebration of this miracle: all are brilliantly
conceived and executed. And, the choreography provides the production with
a judicious moment of tongue-in-cheek kitsch. Reunited with his toy
aeroplane by the sympathetic Sandman (Gillian Keith), the sleeping Hansel’s
imagination powers a ‘lift-off’ to paradise. A bleached-blond flight crew
arrive, smiles beaming and uniforms spic-and-span, and semaphore their
pre-flight briefing before the excited children soar into the air on the
surging wave of Humperdinck’s score, to be greeted by their parents bearing
the balloons that will float them to wonderland. It’s terrifically well
done. 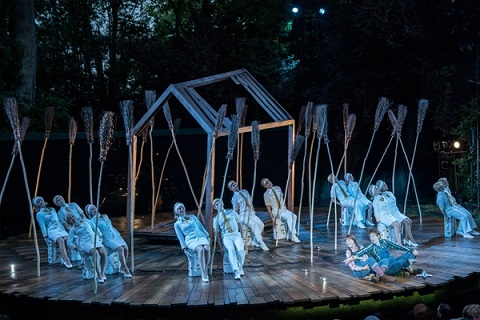 The main roles are double-cast, and on this occasion Rachel Kelly (Hansel)
and Susanna Hurrell (Gretel) formed an absolutely credible pair of
mischievous children, singing and acting with freshness and genuineness,
and evincing tremendous rapport. There is a lovely moment of sibling warmth
when, settling down to sleep, Hansel insists that his sister lie top-to-toe
alongside him, only – when the chill of the night air punctures his faÁade
of courage – to change his mind and welcome her to share his ‘pillow’. With
a simple set, and much to distract an audience in the open-air arena
(helicopters, blackbirds …), the pair worked with unwavering, tireless
attention to detail in order to compel our attention. Kelly’s gamine Hansel
was less prone to a temper tantrum than is sometimes the case with the
boisterous lad, but his geniality was deepened by the mezzo’s dark shine,
while Hurrell’s soprano brightened beautifully as it rose, adding feminine
sparkle. 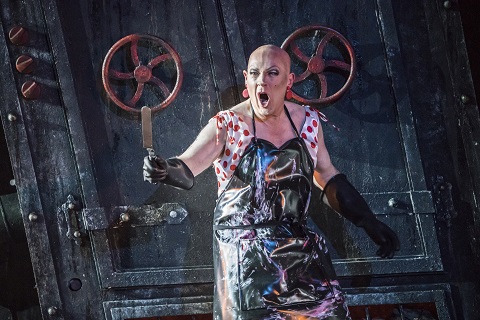 Rosie Aldridge sang commandingly as the put-upon Mother who hopes that the
National Lottery will answer her prayers, while Duncan Rock gave a
performance of vigour and heartiness as the lusty Father whose obvious love
for his children is worn on his chequered sleeve. Alasdair Elliott was a
particularly nasty Witch, wasting no time in whipping off ‘her’ wig,
swapping scarlet stilettos for scruffy slippers, and flinging aside his
drag-queen cleavage pads in disgust. Any delusions that the children had
were brusquely despatched and in no time Hansel found himself caged under a
table being force-fed via a funnel and tube while Gretel gasped in horror
and fear. However, for all this Witch’s violence and vulgarity – ‘she’ used
a can of aerosol cream as make-do foam, when shaving her legs – Elliott
shaped the lines with refinement and his tenor had an air of dignity. The
juxtaposition of nastiness and nobleness was striking. 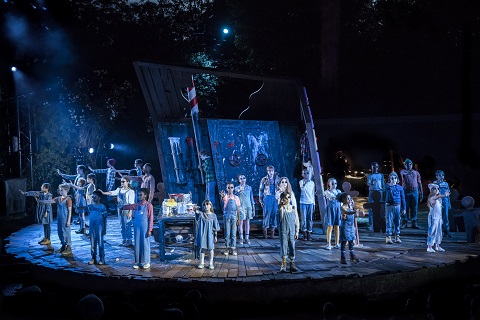 Children from the Pimlico Music Foundation formed a captivating chorus at
the close. Taking off their John Lennon sunglasses, touched by human hands
that restored them from darkness to light, they sang with warmth and joy –
an utterly charming end to an enchanted evening.