Unlike Mr. Pelly’s straight forward, very charming Peruvian fantasy, La Perichole that I saw at the Marseille Opera in 2002, or his parody of The Barber of Seville (sung on top of sheets of musical score paper) seen at the Marseille Opera in 2018 (boasting the hyper personalities of Stephanie d’Oustrac as Rosina and Florian Sempey as Figaro), here Mr. Pelly’s Barbe-Bleue is set on a farm near Paris and in a grand salon in the …lysÈe Palace, with actors of limited personality.
The real Barbe-Bleue is the 1619 folk fairy tale by Charles Perrault which Offenbach parodies ‡ la Second Empire. But Mr. Pelly’s stretches the parody to include a parody of his own — that of opera stagings which imitate the criminal underworld (Bluebeard is dressed and acts like a mobster) and a parody of mindless operettas (King Bobeche is a pompous fairy tale king with a silly fairy tale court). 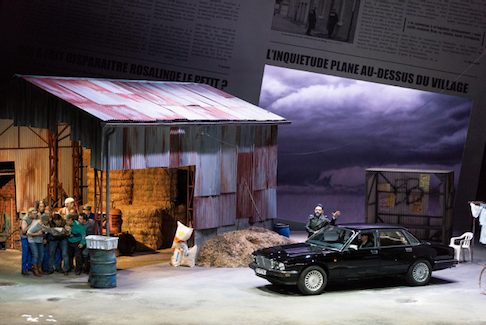 The Farm
The time is now or maybe not-so-long-ago. We see a backdrop that is a latest edition newspaper, two front page articles discuss the strange murders. There is a tractor and chicken sounds and some bales of straw to convince us that all this is somehow what real is. Then we see a huge shelf of weekly revues (magazines), those that thrive on news of lurid allure, maybe true and maybe not. It is a side wall of the grand salon in which such tales of the rich and powerful evidently take place.
All this operetta scenery did not add up to a convincing stage for Offenbach’s amusing serial murders, particularly when we saw the refrigerated lockers of a morgue where Bluebeard’s victims are stored. We do know that “bluebearding” women (serial murder of women) is a real, recognized syndrome, but Mr. Pelly and his long-time designer Chantal Thomas only confused us about what may be real and what may not be.
From copious accounts we know that Offenbach’s muse during his very productive years at the ThÈ‚tre des VariÈtÈs was mezzo-soprano Hortense Schneider. We read of the very great charm of her performances but, alas, we have no digital records of them. Plus what was charming in the Parisian 1860’s may not charm us these days.
It is however the charm, whatever it may be, of an Offenbach heroine that wins our attention and ushers us into his music. The Lyon Boulotte (the Hortense Schneider role) was bravely undertaken by HÈloise Mas who can indeed boast Boulotte’s “Rubenesque” body. Mlle. Mas was directed to be a bratty, tomboy rustic — maybe Mr. Pelly’s idea of real — forgetting that first of all Offenbach’s Boulotte must be a comic diva. 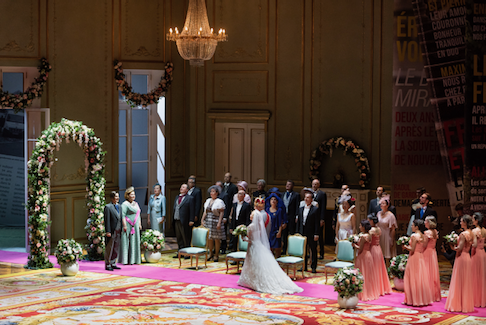 The Palace
Bluebeard himself, played by tenor Yann Beuron, was directed to be oily, dangerous and thoroughly unsavory. Though not the usual mild-mannered, reclusive murderer we read about in actual newspaper accounts of such murders, perhaps Mr. Beuron’s Bluebeard fulfilled Mr. Pelly’s idea of a real murderer.
If the two protagonists of the Lyon Barbe-Bleue were meant to be real, the balance of the cast was rendered quite irreale. Prince Saphir played by Carl Ghazarossian and Popolani played by Christophe Gay were physically willowy, and both had an annoying lock of hair that fell across their faces. Count Oscar was willowy as well. The three men exuded a similar maximal energy in executing their roles while avoiding any distinguishing personality or character.
Fleurette, played by soprano Jennifer Courcier, King Bobeche played by Christophe Mortagne and Queen Clementine, played by Aline Martin were stock operetta characters. The thirty-six choristers were directed as if they were collectively one character — they made unison, abstractly choreographed movements.
Maybe a less slick reading of the score by conductor Michele Spotti and a less slick performance by the Opera de Lyon orchestra might have allowed a bit of Barbe-Bleue’s innate charm to slip through.
Michael Milenski