And history is on their side. An advertorial in the Brno newspaperMoravskÈ noviny, prior to the premiere of the opera at the Na hradb·ch Theatre on 6th November 1924 had little to
say about the music or the design, but promised the paying public ‘seventy
costumes’ designed by artist Eduard MilÈn, including – as Jennifer Sheppard
notes in her article ‘How the Vixen Lost Its Mores: Gesture and Music in
Jan·?ek’s Animal Opera’ – ‘grasshoppers and crickets in “yellow-green
tailcoats and magni?cent little wings”; black-and-white glow-worms with
re?ectors “to light up their bottoms” in the night scenes; a wire-frame
rooster costume lined with brightly coloured fabrics; and a green, blue and
black dragon?y of “melancholy beauty”, whose tiny, delicate underwings were
illuminated in glittering gold’.

Not to be outdone, for their ?rst production of the opera in May 1925 the
Prague National Theatre engaged Josef ?apek, brother of the author Karel,
as designer, and he duly dished up ‘?ying goggles for the mosquito; ?ouncy
polka-dot petticoats for the hens; cowboy spurs with golden rowels for the
rooster; a furry deerstalker for the forester’s dog’ (Ibid).

Such aspirations for mimicry-cum-verisimilitude are not on the agenda of
Peter Sellars, whose production of Vixen – first seen in Berlin in
2017 – was performed at the Barbican this week by his long-term
collaborator and friend, Sir Simon Rattle, and the LSO. Here, minimalism
prevails. The entire cast – soloists, London Symphony Chorus, the children
of LSO Discovery Voices – are dressed in simple black and perform the
action on a bare raised platform in from of the orchestra. Props comprise
the odd chair or table, carried on by cast members as required. 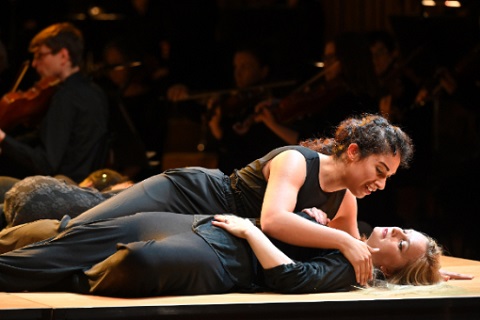 In the light of Jan·?ek’s rather arbitrary ‘pairings’ of man and beast –
the same singer takes the roles of the Forester’s wife and the Owl, the
Priest’s animal embodiment is the Badger, and the inebriate Schoolteacher
and Mosquito share a role and a bottle – my first thought was how on earth
were we to distinguish the animals’ identities and their human
correlations? But, I need not have worried: video designers Nick Hillel and
Adam Smith (of Yeast Culture) offer an Attenborough-esque Planet Earth natural history side-show which presents tadpoles as
they wriggle into life, dragonflies engaging in shimmering. flickering
mating rituals, peering owls, migrating geese, fluttering sun-flecked
forests and moonlit mountains.

Indeed, Sellars’ approach pre-empts objections which are sometimes voiced
about the stylisation of gesture in which some productions indulge; and if
we can’t always differentiate between man and animal, then this only serves
to emphasise the inter-connectedness of the entire natural world, man
included.

Billboards in Brno in 1924 had enticed prospective punters, ‘It will be a
dream, a fairy tale that will warm your heart’, but there is no
sentimentality in Sellars’ Vixen. That’s not to say that it does
not touch one’s heart, but the strings it pulls of the more sombre, dark
kind. Warmth came in the form of the wonderful playing of the LSO. The
score includes many instrumental episodes, which are often both balletic
and mimetic, and Sir Simon Rattle ensured that every rhythm was delineated
with pulsating vigour, every surge of harmonic passion blossomed fulsomely,
every extreme of register was meticulously scaled: there was some
especially beautiful playing from the strings. In the programme booklet
Rattle declares this opera was “the piece that made me want to become an
opera conductor … and [its] still one of the pieces that reduces me to
tears more easily than any other”, and the loving tenderness with which he
articulated the score’s emotions and dramas might well have inspired a tear
from many in the Barbican Hall. The LSO did not just mimic or suggest stage
movement or feeling, they took responsibility for the drama, filling in the
gaps in the episodic structure, immersing us in a glorious musical embrace. 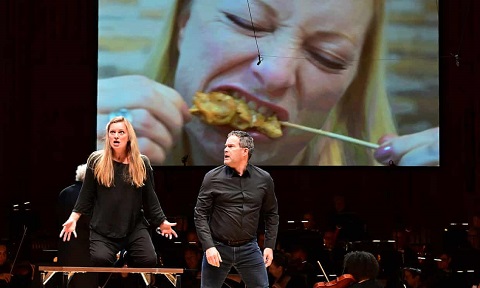 Lucy Crowe was a stunning Vixen – insouciant, courageous, feral, sensuous,
daring, brazen and honest. This is one of best things I’ve seen Crowe
tackle. This Vixen was strong and nimble, and Crowe relished the physical
animation as much as she did the vocal vivaciousness. Standing astride the
Forester’s kitchen table she impassionedly goaded the repressed hens into
socialist revolt, and when she failed, she resorted to tricksy tactics,
claiming that she’d rather be buried alive than live with such losers. A
winning move: the Cock’s vanity got the better of him and his ‘bravery’ saw
him succumb to the ‘playing dead’ mime. The Vixen’s gluttonous
gourmandising on chicken skewers was played out in gloriously chin-greasy
detail on screen.

Crowe’s Vixen was both ethereal – her soprano silky in the reflective
soliloquies – and earthy. In the cartoons by T?snohlÌdek upon which the
opera was based, the Vixen relieves herself into the badger’s den to force
him to evacuate, and Crowe sprayed with gleeful vigour! She sang with
flashes of brightness and fire, balanced by soft sensuousness. It was an
utterly beguiling performance.

Sophia Burgos’ Fox was surprisingly tender: no strutting and posing here,
instead coaxing and caring in a beautiful love duet with the Vixen.
Initially I thought that Burgos struggled to carry over the strong
orchestral fabric, but she grew in stature, crafting a convincing
personality: a sort of house-husband of paternal benevolence, anxiously
ushering their growing brood of cubs into the under-stage den when their
mother was threatened by Hanno M¸ller-Brachmann’s Poacher, Haraöta, after she’d
raided his basket of poultry. If the Vixen’s death did not seem quite so
shocking as it sometimes can do, then that did not seem to matter: the
Vixen’s death was not the climax of a dramatic arc but rather just one
happening, incidental and quickly forgotten by a natural world whose chief
concern was to nurture the next generation.

As the Forester, Gerald Finley’s performance captured the moral
complexities faced by the humans living in the forest. Amorality met
anxiety met ambiguity in the personage of this Forester. This was an
expressive tour de force. And, a vocal triumph too. Some
may have objected, but I loved the way that the original cartoon’s
intimations that the Vixen was the animal embodiment of Haraöta’s seductive
beloved, Terynka, was referenced in Finley’s encounter early with the Vixen
– a passionate love-making accompanied by overflowing orchestral warmth,
which teased out myriad emotions. Upon returning home, the Forester was met
with a disapproving scowl from his Wife, richly sung by Paulina Malefane
(also Owl and Woodpecker). Was the encounter real or imagined? The ghostly green glow
in which the encounter was bathed by lighting designer Ben Zamora made it
difficult to know. But, their subsequent struggle in which they seemed
locked was as much a physical one as a psychological one: with the Vixen,
by turns, beaten for stealing the Forester’s food, biting back in defiance,
nestling needily alongside her captor, needling him with her desire for
freedom. 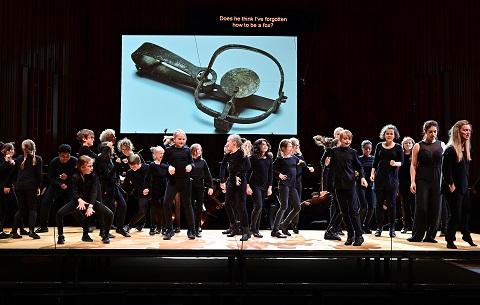 This was a luxuriously cast performance, even allowing for the dearth of
native Czech speakers. Peter Hoare was equally commanding and characterful
as Schoolmaster, Cock or Mosquito; Jan MartinÌk was a fine Parson/Badger,
gruff and glum. M¸ller-Brachmann stalked opportunistically and menacingly
around the Barbican Hall, his hunting gun perched, ever-ready. Anna
Lapkovskaja’s Dog was convincing put out by the arrival of a usurper in the
Forester’s household, but animal instinct took over though the
companionship she craved was denied her. The London Symphony Chorus sang
with vigour and managed their entrances and exits swiftly, while the
children of the LSO Discovery Chorus were well drilled, vocally and
dramatically, charming us in every scene in which they appeared.

And, what of Sellars’ slide-show? Well, images such as the gruesome
hunter’s trap and the conveyor belts of chickens heading to their destined
doom certainly made their mark. But, the city apartment blocks were an odd
evocation of the Forester’s milieu and the folk dancers who supplied the
entertainment at Haraöta’s wedding seemed less fitting. Overall, I found
the visuals rather hyperactive: however well one knows the opera, how could
one take in the dramas playing out on both screen and stage, in song and
symphonic strata, simultaneously?

The three Acts ran segue with no interval; in fact, Rattle allowed barely a
breath between Acts – just enough time to get personnel off-stage and back
on again. The effect was to cohere the episodic scenes – which have little
to connect them, chronologically or in terms of dramatic linearity – into
one flowing stream of nature, emphasising not so much the epiphanic rebirth
that the Vixen’s death bestows upon the Forester, but rather the continuous
renewal of life, and the speed of transitions between seasons and
generations. At the close the Forester espies the Frog: not you again, he
declares, only to be answered by a cheeky, slimy nose-rub and the riposte,
“That wasn’t me, it was my grandfather. He told me all about you.” The
moment was simultaneously insouciant and of import: here was the brevity of
life, the brutality and benevolence of nature. Like the whole performance,
it was beguiling and brilliant.