Whether the titular protagonist of Alphonse Daudet’s 1869 short-story
(which the author subsequently transformed into a play, with original
incidental music by Bizet) is a real woman or just a projection of
Federico’s mind, we do not know. And, it’s not a question that Oliver
Platt, the director of this new production of Francesco Cilea’s 1897 opera
based on Daudet’s dark tale, seems all that interested in addressing. For
Platt gives us a neatly designed, largely naturalistic production in which
the inescapable, tragic consequences of romantic obsession and delusion
take precedence over any forensic psychological examination of the roots
and causes of such angst. That’s not intended as a criticism: this
production drives forward unstoppably and clutches all in its relentless
grip, enabled by some superb verismo singing and led insightfully by
conductor Dane Lam.

The latter demonstrates finely tuned verismo instincts, a sure ear for a
surging melodic phrase and a telling orchestral detail in equal measure,
and the ability to make six desks of violins sound like sixteen when
required. The prelude to Act 1 was a microcosm of such skills, as the dark
muted opening relaxed into the tender romanticism of the upper strings’
lyricism, with textures so transparent that we could hear every tantalising
woodwind gesture.

Designer Alyson Cummins transports us, not to late 19th-century
rural Provence but, I imagine, to an Italian or Sicilian village during the
1940s. Our eye is focused by some crumbling stone walls, clinging to and
projecting from the Holland House backdrop, around which assorted wheels,
baskets, vats and brooms are scattered. The domain is well-defined: at
times it reminds me of a Leonardo Sciascia novel, minus the mafia. 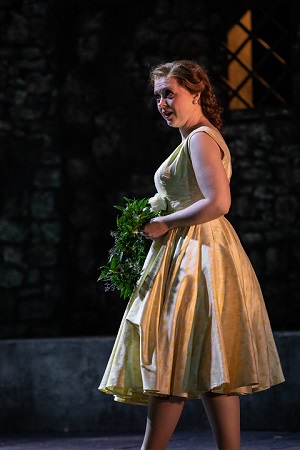 It’s quite a static setting though; perhaps that doesn’t matter, given that L’arlesiana is an opera in which the ‘action’ essentially takes
place within the minds of Federico and his over-controlling mother, Rosa
Mamai, and is allegorically reflected in the tales spun by the wise
shepherd/sage Baldassare. But, there is a lot going on in Federico’s
psyche. And, while Cilea’s first opera, Gina (a graduation work of
1889), might have owed a verismo debt to Carmen, the composer
wasn’t really drawn to violent ‘realism’ in the vein of Puccini, Mascagniet al (who overshadowed him in his day, and still do). L’arlesiana is essentially an opera about hopelessness. And, as
such, I feel the representation of Federico’s tragedy needs to find a means
to convey his inner thoughts as much as the outer events. That doesn’t
necessarily mean the stylisation that Rosetta Cucchi adopted at

, though Cucchi’s approach was thought-provoking and not without merit.

The ostensible ‘action’ is simple. Rosa Mamai’s eldest son, Federico, has
fallen in love with a woman from Arles. Her youngest son, ‘L’innocente’ is
retarded, so she’s pinning all her hopes on getting Federico wedded to the
loyal local lass, Vivetta – to ensure that she has someone to look after
her in old age, one presumes. Metifio arrives bearing a letter which
‘proves’ L’arlesiana’s infidelity (it never seems to occur to anyone to
check the ‘facts’), and Federico agrees to marry Vivetta. But, like Tess
Durbeyfield, spinning self-destructively between Angel Clare and Alec
d’Urberville, as the wedding day approaches Federico sinks ever more deeply
into despair and derangement. Unlike Tess, Federico does not stab his
physical and psychological persecutor; instead, he avoids the gallows by
jumping to his death off the hayloft. Fortunately, for Rosa Mamai, her
youngest ‘idiot’ son has by this time miraculously found his voice, so it
looks as if she’ll be alright in her dotage. 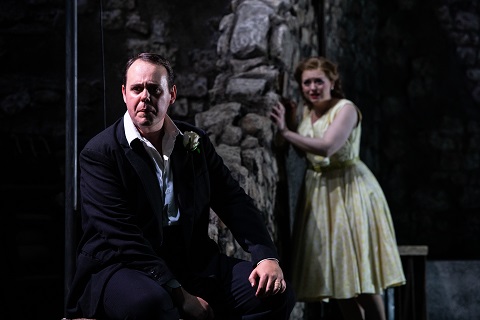 L’arlesiana
has largely lived by Federico’s lament, ‘» la solita storia del pastore’.
At the opera’s first outing, in Milan’s Teatro Lirico in the autumn of
1897, one Enrico Caruso, performing Federico in his first Milan season,
made notable a mark, which the opera itself did not; subsequently, the
lament has become an ‘Italianate tenor’ calling card, from Gigli to the
Three Tenors. Australian tenor Sam Sakker did an excellent job in upholding
the tradition; his tenor is strong and sure – sadly, his acting is stock
and stiff. In contrast, Fflur Wyn made Vivetta a really credible character
– vivacious and sympathetic: no pale MicaÎla to an imagined Carmen was she.

Yvonne Howard’s Rosa Mamai was suffocating and sympathetic by turns. Howard
had a grip on the matriarch’s obsessive mania and exercised steely control,
vocally and dramatically, in her Act 1 narration of her son’s first
encounter with the woman from Arles, ‘Era un giorno di festa’. Later her
voice did not so much shine with verismo passion, as burn with
self-torturing anguish, and her Act 3 ‘Esser madre Ë un inferno’ made one
hold one’s breath. Howard’s stamina, focus and commitment were exemplary. 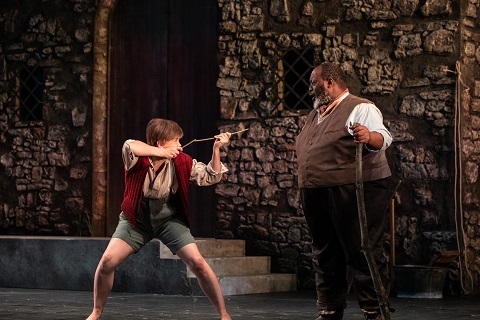 Simon Wilding’s Metifio brought much-needed shots of dramatic action into
play – for all Cilea’s fluency there is overall a lack of memorability and
frequent note-spinning about his melodising. Keel Watson was a resonant
though occasionally wayward Baldassare, and created a lovely rapport with
Samantha Price’s gamine L’innocente – particularly at the start when he
recounted his framing fable about a goat which struggles all-night with a
hungry wolf before collapsing and dying at daybreak, a tale which does not
bode well for the lad’s older brother’s romantic hopes. As Rosa’s brother
Marco, who is despatched to Arles to do some detective work on the mystery
woman, James Cleverton made a strong contribution. The Opera Holland Park
Chorus weren’t encouraged to be very ‘peasant-like’ in demeanour but they
sang with their customary spirit.

This is the third time that Opera Holland Park have staged L’arlesiana. The first production, in 1998, was pretty much the
first UK staging of any status; this was followed by a 2003 production
directed by Jamie Hayes and starring Sean Ruane as Federico and Rosalind
Plowright as Rosa Mamai. I’m in accord with my Opera Today colleague,

, in his wish for a staging of Cilea’s 1892 La tilda, in which a
street singer seeks to avenge her wrongs upon a faithless lover. It remains
an unknown quantity. OHP as a ‘house’ has a real feeling for this style and
for its conventions. It would be good to see what they might make of it.