Patrons lucky enough to score a ticket to the SRO soiree were provided an extensive, multi-course dinner with suitable libations, and the evening was first punctuated by snappy song performances from four appealing young Apprentice Artists.

As the crowd was tippling some bubbly, Catherine Goode’s poised soprano, Joyner Horn’s rich mezzo, Quinn Bernegger’s polished tenor, and Robert Gerold’s accomplished baritone warmed up the proceedings with an opening set of such novelty songs as I Can Cook, Too, Frim Fram Sauce, Tea for Two, and Peel Me A Grape. As the audience tucked into their main course, the quartet returned to position themselves amid the audience accessorized with cute costume pieces and props (including a rubber chicken), to divvy up the duties of Bernstein’s quartet of French recipes set to music, La bonne cuisine.

But artistically, the evening belonged to local favorite, mezzo-soprano Joyce Castle who was utterly engaging in her winning star turn as Julia Child in Lee Hoiby’s twenty-minute opera, Bon Appetit. To enthuse that Ms. Castle is a National Treasure is simply too weak praise for her perfectly calibrated, masterfully voiced “tour de farce.” Although she has a potent, full-bodied instrument, on this occasion, she modulated her delivery to convey Julia’s tongue in cheek personality, reveling in all its comic quirkiness. 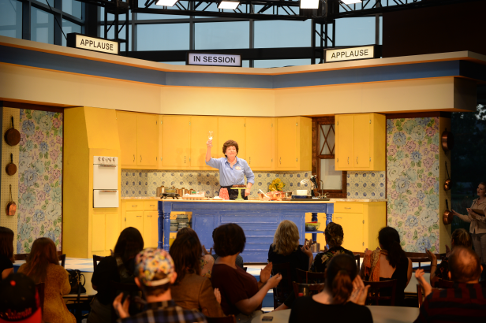 And if there is another opera star that has Castle’s unique brand of charisma, musicality, and unerring comic timing I don’t know who it is. Together with director Nathan Troup, this singing actress mined a wealth of sight gags, takes, deadpans, asides, eye rolls, and comic business that kept the audience tittering and applauding in giddy delight the entire length of the piece.

Without slavishly impersonating the famous chef, she managed to push all the familiar buttons with an affectionate portrait that never descended into caricature. To name but one memorable moment, the slyly nonchalant appearance of Ms. Child’s signature glass of white wine was so comically shameless that the audience surrendered whatever was left of their composure and howled with glee. This lady knows how to keep and captivate a crowd.

The libretto by Mark Shulgasser is based on an actual airing of The French Chef in which a chocolate cake is baked. The sole suspense is whether the somewhat scattered cook will get the recipe together and the cake produced. Any guesses as to the outcome?

After the sustained, resounding cheers that were rained on Joyce finally diminished, and attendees resumed their seats from bestowing a well-deserved standing ovation, all were served a slice of Bon Appetit’s signature chocolate cake as their dessert course.

While the technical elements were of necessity simple, they were nonetheless all that was needed to present a polished effect. Adam Crinston’s TV Kitchen set was handsome, bright, and well appointed; Nate Wheatley lit it simply and evenly; Heather Lesieur’s costume conveyed just the right Child-like look; and Sarah Norton’s make-up and wig completed Ms. Castle’s transformation.

The skillful pianist Elden Little played with power, playfulness, and panache all evening long. For diners and opera-goers alike, Bon Appetit was a wholly delectable “happening,” a feast for eyes, ears and tummy alike.

One final note about the remarkable, enduring career of Joyce Castle: After a very long and distinguished run as one of Operadom’s most beloved, prolific, and successful performers, the mezzo continues to gift us with new role assumptions like Julia Child. She will next undertake her first Countess in next summer’s The Queen of Spades. Long may she rave! Mark calendars now!