The decaying Baroque pile – foreboding pillars (perhaps an allusion to
James’s phallic tower, at the top of which Peter Quint appears?); panels
and glass panes that shimmer, swivel and squirm, admitting eerie presences;
and doors that open, unnervingly, of their own accord – is a psychic
repository of past degradation and dissolution, and present-day moral
disintegration and dilapidation. This Gothic storehouse of sins, spirits
and souls is lit, initially, by flickers of the early evening sun’s rays
which finger the smeared, shimmering glass, and tease the eye. As darkness
falls, Malcolm Rippeth’s spine-tingling lighting designs play their own
tricks.

There are no ‘boundaries’: the interior and exterior of Bly diffuse into
one another, trickling and infusing deceptively, like the waters of the
lake that lap at the forestage shore, where Miles insouciantly sails his
paper boat. The open space is, at first, sparsely populated – just a few
abandoned children’s toys: a tricycle-rocking horse, a toy theatre, a
hoop-and-sticks, the chalky remnants of a game of hopscotch. Innocent
pastimes in which we see the children, Flora and Miles, indulge during the
instrumental interludes in which the ‘screw’ theme is twisted ever tauter
and tenser.

Progressively, though, the shadows deepen and stretch: illumined by
guttering candles, a grand piano casts an imposing silhouette which dances
disturbingly with the black forms of human figures, a school desk, as the
shores of the lake shatter, and a black pool edged with crooked, crumbling
paving stones forms: a stagnant, poisonous pit.

As the production unfolds, and first Miss Jessel, then Flora, and finally
the Governess herself wade through the inky waters, Muller seems
increasingly to be reminding us of Edmund Wilson’s debate-provoking article
about James’ novella, ‘The Ambiguity in Henry James’ (which was published
in The Triple Thinkers in 1948), which promoted the
non-apparitionists’ cause, arguing that the ghosts were merely figures of
the Governess’s hallucinations, and substantiating their claims with
reference to the ‘Freudian’ symbols of the tower and the lake with which
the male and female ghosts respectively are associated.

This production is a masterpiece of dramatic, and musical, pacing. As
darkness literal and figurative tightens its grip, conductor Richard Farnes
coaxes a panoply of conjuror’s colours from his thirteen-piece ensemble. It
seems mean to single out a few players from the superb ensemble but I can’t
remember a production when the clarinet, cello, bells, harp and celeste
etched their utterances so compellingly: the entire instrumental voices in
the pit were as inescapably provocative as the ghostly ones above. 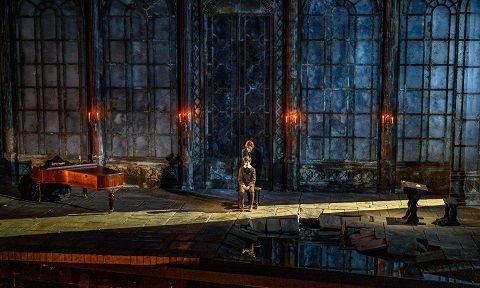 Muller’s conception of the opera’s Prologue is masterly – and not only
because Ed Lyon’s Narrator sings with such directness and immediacy, every
word telling, and tolling. The ‘Notes’ which Britten’s librettist Myfanwy
Piper wrote, record initial plans to present an imagining of an interview
between the Governess and the ‘beloved employer’ who hires her as a
surrogate guardian to his young charges. Britten and Piper considered
portraying the Governess’s ‘feelings of romantic love for her employer’, an
incomplete draft of the libretto confirms. This idea was abandoned but the
subsequent addition of the Prologue – partly for practical reasons as the
opera was felt to be too short – reinstated this idea. It was decided that
the description of the interview between the Governess and the children’s
guardian would be delivered indirectly by a Narrator (an equivalent of
‘Douglas’ in James’s tale, who introduces the ghost story to the country
house guests). The roles of the Narrator and Peter Quint would be sung by
the same singer, thereby directly involving the audience in the opera’s
moral dilemma.

Muller’s ‘take’ on this conceit is ingenious. Ed Lyon, dressed in a formal
day suit, invites the audience to hear his “curious story”; at which point
Sophie Bevan’s Governess, cloaked in a voluptuous identity-erasing
crinoline, arrives and listens to, then seems to interacts, with the
Narrator’s recollections. The result is that, as the Governess looks
yearningly at the Narrator and waits for the approval and instructions
which seem to be delivered directly to her, the ‘him’ of the narration
becomes an imagined ‘I’, the past and present become blurred. It makes her
subsequent encounters and battles with Peter Quint, whose red wig and
knee-high black boots do little to disguise his likeness to the
Narrator-cum-Guardian, all the more ambiguous and troubling. 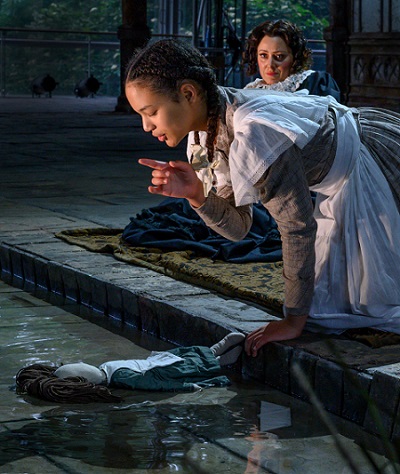 This is a superb interpretation of the Governess by Bevan. At the start,
her soprano rings with the fresh brightness of new starts and new
relationships: she certainly is James’s ‘young’, ‘untried’ and ‘nervous’
young girl, excited by the ‘space and air and freedom, all the music of
summer and all the mystery of nature’ which Bly will offer her. Even the
timpani jolts which disturb her journey to Bly don’t sound too foreboding:
she wants the children to “show me everything”, Bevan declares in a voice
which shines with anticipation. Then, suddenly, when she reads a letter
telling her that Miles has been dismissed from his school, Bevan’s visage
and voice crumble in dismay, fear and confusion. But, it’s not long before
she is charged with her mission: she must, “See what I see, know what I
know, that they may see and know nothing”, her soprano trailing off into a
fragile pianissimo which hints at mental disintegration. When facing her
alter ego, Miss Jessel, this Governess burns fiercely; when writing the
letter to the children’s guardian – “there are things you must know …
Forgive me” – Bevan’s soprano is sensuously soft; the energy which ripples
through her playful games with the children acquires an edge of panic when
she chastises or pleads with them. This Governess is every bit James’s
‘impressionable young girl’ whose nature reflects ‘her anxieties and
inductions’. And, at the climax of her destructive battle with Peter Quint,
Bevan garners a formidable power, her soprano vibrant with the validity of
the Governess’s self-assumed ‘authority’.

Adrianna Forbes-Dorant and Leo Jemison are brilliant as her young charges,
Flora and Miles. Waiting excitedly for their new Governess’s arrival at Bly
they practise their bows and curtsies with ever more extravagant
flourishes. Their innocent pastimes perhaps hint at darker concerns though:
Flora takes the large leather ball they throw between them and places it
beneath her white dress, thrusting her stomach out in imitation pregnancy;
when the Governess routs Miles in mock-swordplay and the boy falls to the
floor, its difficult not to see Miles’s prone figure as a foreshadowing of
the damage she is destined to wreak. Later, the children hide under the
piano, then don ghastly masks and leap out to harry their tormented tutor.

Jemison’s ‘knowing’ delivery of the ‘Malo Song’ is disquietingly confident
and poised: the clever but boisterous little boy who learns his Latin
declensions so skilfully, suddenly becomes absolutely, unnervingly,
motionless, his seated form facing forward, his glance slanting sideways,
fixed with unwavering intensity on his Governess as the strange song etches
its eerie shapes in the still air.

Forbes-Dorant’s Flora, warm and strong of voice, seems to be full of
good-hearted mischief as she gambols and goads the Governess. But, her
geography lesson turns ghoulish when she christens the lake at Bly as ‘The
Dead Sea’ – “They call it dead because nothing can live in it,” explains
the Governess. Taking her rag doll from its pram, Flora cradles and strokes
it for a moment, before plunging it violently into the water: raising the
dripping doll, she proffers it – a sacrificial effigy of ghastly limpness –
towards an unknown, unseen force, her arms outstretched, her eyes
transfixed and glowing with fury. It’s horrifying. 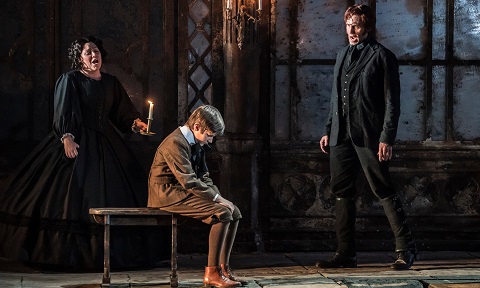 The Ghosts in this production would give neither of the two sides in the
critical debate surrounding James’s novella – the ‘literalists’ (literary
scholars such as Leon Edel, Allen Tate and Robert Heilman) and the
Freudians (led by Edmund Wilson) – a clear ‘victory’. Finely balanced
between the real or imagined, here Peter Quint and Miss Jessel are very
much ‘present’, though it’s impossible to be certain whether they literally
walk the corridors at Bly or simply stalk the troubled dreams of the
Governess.

Overcome with fear that “They are lost! Lost”, the Governess falls to the
floor in a hysterical faint. With the her prone figure on stage throughout
Quint’s nocturnal bewitchment of Miles, we wonder whether his seductive
song might not be simply her fervid imaginings? But, we
see and hear it too, don’t we? And, Lyon’s mesmeric melismas are no
ethereal crooning, but rather a strong and muscular, and beautiful,
call-to-arms. What young boy would not be impressed, charmed, corrupted?
When Mrs Grose rushes in to rouse Flora from the latter’s own night-time
ramblings, the Governess awakes and finds herself alone in the garden with
Miles. Staring squarely at the Governess, he taunts, in the purest tone,
“You see, I am bad. I am bad, aren’t I?”, his hand outstretched, beckoning.
Who is tempting whom?

As so, what of the ending? To which of the two forces in the battle for his
‘possession’ will Miles address his response to the Governess’s question,
“Who do you wait for, watch for?”? In the event Muller stays true to the
ambiguity that she has sustained throughout. At first, it seems, as Quint
retreats and the Governess cradles the collapsed boy in the folds of her
crinoline, that the victory is hers. But, Muller has a final surprise in
store. The Governess may have convinced herself that she has ‘saved’ Miles
– “I caught him, yes, I held him – it may be imagined with what a passion”
says James’s Governess – but her passion is a destructive deadening
counterpart to Quint’s imaginative creativity. And, in the final moments
she seems to realise this, and her growing identification with the ghosts,
particularly with Miss Jessel, overcomes her. She rises, and as the lights
extinguish, she literally follows in her predecessor’s footsteps, walking
slowly through the black waters, across and beyond the Garsington pavilion.

Muller preserves and communicates all of indeterminacy of James’s pervasive
evil. In his ‘Preface’ to the tale, James writes, ‘There is no eligible …
absolute of the wrong; it remains relative to fifty other elements, a
matter of appreciation, speculation, imagination … Only make the reader’s
general vision of evil intense enough, I said to myself – and that is
already a charming job – and his own experience, his own imagination, his
own sympathy … will supply him quite sufficiently with all the particulars.
Make him think the evil, make him think it for himself, and you are
released from weak specifications.’ Muller certainly makes her audience
‘think’ the evil ‘for themselves’. There are no moral absolutes, and the
result is both terrifying and transfixing.

Britten: The Turn of the Screw