Imagine our relief, then, when Lindy Hume’s remount of her 2012 New Zealand staging proved to be a brisk, colorful, and unskewed production.

Designer Richard Roberts’ quasi-contemporary design for act one promised a show in itself. It did not disappoint, rising, folding, and rotating, from full stage to intimate scenes and back again.

It was particularly felicitous in making sense of the notoriously hard-to-stage nocturnal episode outside the Ceprano Palace and Rigoletto’s humble flat. It was good to have Roberts’ set to keep us interested, because the performance it framed was curiously inert.

As the lights came up and the well-dressed all-boy chorus began to yap with anticipation of booze and flooze to come, the mopy white-jacketed gent we’d glimpsed during the overture all but vanished in the melée.

This had to be Rigoletto, though he looked like an aged busboy wearing a Groucho mask. But as the action unfolded, the living threat the jester has to generate to dominate a stageful of enemies never emerged. 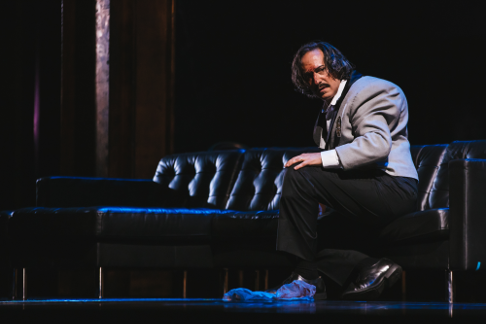 Rigoletto as a nebbish: not even a waspish Groucho, more a whining Woody Allen. Giuseppe Altomare has a sizable dark bass-baritone, but with very little range of color and no heat. He’s just miscast in a role that demands sweetness one moment and lava the next.

His boss and nemesis, the playboy Duke, played beige to his charcoal. Yongzhao Yu is a big boyish lad; he has all of the notes and none of the flair the role requires: no humor, no malice, no passion: zip.

It is up to the Gilda of Soraya Mafi to shoulder the weight of this production, and she very nearly manages to get it off the ground. When she is on stage, her tiny post-adolescent figure and adorably open face fix our attention utterly, and when she sings we rise with her. I have never heard a more perfectly phrased “Caro nome,” but her every note and moment are equally simple, moving and right.

Slavic singers seem to have a corner on the role of Sparafucile: Croatian Ante Jerkunica has exactly what the role requires: an inky bass that’s naturally scary, a shaved dome and loose, lanky body that’s made to wear a dark hoodie and scuffed tennis shoes, and a kind of brutal innocence that’s more creepy than overt menace.

It’s too bad that Jonathan Dean’s supertitles stick him with a revolver (that doesn’t go off) instead of a dagger, confusing the drama of Gilda’s fatal wounding. (It’s even more distracting when Dean forgets a moment later and the word “knife” appears on the screen.) 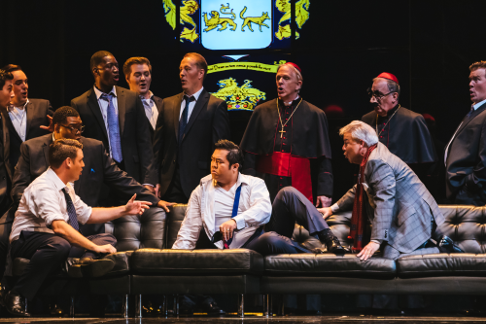 Yongzgao Yu as the Duke of Mantua [Photo by Sunny Martini]

In a way that’s characteristic of this Rigoletto: always interesting to look at, it’s dotted with little details that that don’t come off : the Duke’s sleepy-mask while he laments the loss of Gilda; the two bishops in full regalia who take part in her abduction: the Duke pretending to hide behind an armchair in Rigoletto’s kitchen, like an oversized Cherubino; Monterone turning up in a dressy new costume in the Duke’s morning-room on his way to execution…

And except for Gilda and her assassin, just not very movingly sung. Carlo Montanaro is an essentially lyric conductor, who drifts toward moderato whatever the tempo marking to moderate tempos and favors a suave sound over anything harsh or edgy.

I suspect he’s what is known in the trade as “a singers’ friend.” But what makes singers comfortable may let the passion seep away.

All photos courtesy of Seattle Opera