The evening belonged to conductor Valery Gergiev, a gift to him by veteran Berlin Volksb?hne stage director Andreas Kriegenburg and set designer Harald B. Thor who placed a huge black Steinway concert piano as the sole dressing of the huge expanse of white marble that was the stage. The production was indeed not about locale (though in fact the feel was pure Genoese architect Renzo Piano), it was about lyricism.
There was only the piano except for the small black chair in which at the end Simone died and into which fell a confused Adorno as he was proclaimed the city’s new doge. Had it not been brilliant theater it would have been a concert staging.

Much happened in between Boccanegra’s election and his death. Moment after moment recalled the great Verdi and presaged his most profound gestures — the indelible tonalities of Traviata, the male bonding in Otello, and most moving of all, the Don Carlo minor second weeping of Fiesco in his duet of reconciliation with the dying Boccanegra.
If no stylistically defining moments emerge from Simon Boccanegra it is not from a lack of splendid arias and duets in moments of extreme duress and of ecstatic resolve. Simon Boccanegra is a sprawling tale of splintered focus, no one character assumes an immensity of theatrical presence — Simone is overwhelmed by affairs of family and of state, the villain Paulo has confused motives, the grandfather Fiesco suffers a complicated history, Adorno appears out of nowhere and Amelia will not be upfront with anyone.
Still there is lots to sing about, maybe too much. Stage director Kriegenburg got the telephones put away early on, costumer Tanja Hofmann gave everyone a discreet identifying color in ordinary contemporary dress and conductor Gergiev took over and made the most of it. Initially we thought maybe we had stumbled into a Boris Godunov —. RenÈ Pape’s Fiesco lamented and shamelessly wept like a Russian bass in his famed prayer “Il lacerato spirito.” We did however quickly adjuste to conductor Valery Gergiev’s unidiomatic Italian, his orchestra participating with the singers in moods and colors rather than in Italianate operatic gestures.
Twenty-five years lapse between the prologue and the events that lead to the murder of Boccanegra. The filmy curtain that covered the architecture vanished after the prologue. His daughter Amelia appeared through some sort of silly digital magic that we had to overlook to deliver her luminous “come in quest ora bruna sorridon gli astri e il mare!” Adorno arrived. He sat momentarily at the piano, the harp accompanying his ecstatic greeting that became a love duet. Mo. Gergiev made time stand still in an absolute lyricism of young love.
Gergiev made the lyricism of Verdi’s Boccanegra the central focus of “his” production, insisting that we feel each of Verdi’s characters. And that we did in its arias and duets — the warmth of the love of Boccanegra for his daughter, the loyalty of Amelia for her father, the selfish, ugly rage of Paolo, the jealousy that consumed Adorno and dissolved into desperate need. Above all else we felt Boccanegra’s dying cry to the sea.
The senators, the conspirators and the populace were dressed in undifferentiated dark color. They were construed graphically on the marble expanse of the stage, a part of which was a monumental circular structure that moved of and within itself. This complex mechanism served as a metaphor of the size, power and pride of a city that has.called itself “la Superba,” and against which the actors of this civic and familial tragedy reacted. It was an evening of lyrical moments laid gloriously bare by conductor Gergiev and a splendid cast of singers. 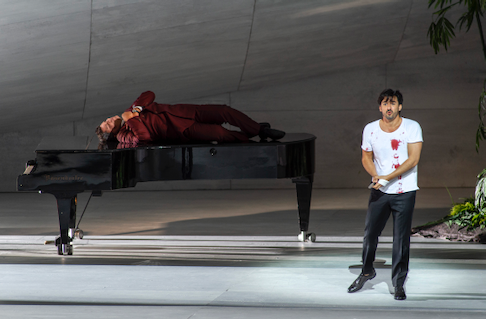 The piano as a tomb (the first, failed poisoning of Boccanegra), with Adorno

In keeping with the scope of the production Italian baritone Luca Salsi was a very feeling father and a sensitive patriot and statesman in warm and strong voice. Latvian soprano Marina Rebeka has the purity of voice to project the innocence of Amelia and the strength of voice to support her resolve. German bass RenÈ Pape found satisfying resonance of voice to meld patrician pride with surprising personal integrity. American tenor Charles Castronovo offered a perfectly sculpted Adorno that gave young Gabriele convincing sincerity as a lover and as a rebel. French baritone AndrÈ Heyboer as Paolo poisoned the water drunk by Boccanegra with the evil resolve of a despicable baritone, assisted by bass Antonio Di Matteo as Pietro.
Simon Boccanegra was performed in the 2200 seat Grosses Festspielhaus, its vast proscenium width allowing both the monumental tower and a vast slit through which a brilliant blue sea shone at Boccanegra’s death. Completing the exemplary artistic resources employed for this production was the Vienna Philharmonic.