This is owing in no small measure to the inspired baton of Joseph Colaneri, who reinvented this timeless classic with fresh ears. Maestro Colaneri has cleansed the performance of some time honored performance indulgences, and if some standard rubati and fermati were missing, the result was liberating. The sprightly passages of Verdi’s masterpiece fairly crackled, while the poignant stretches were heightened by contrasting, intense introspection. The instrumentalists responded with a cleanly detailed, stylistically apt reading that was arguably their best work in the pit, in a season marked by fine playing. The cast was assuredly up to the demands of Verdi’s middle period masterpiece.

Violetta Valery is one of the pinnacles of operatic soprano roles and Amanda Woodbury met its challenges head on. Ms. Woodbury has a pliable, sizable lyric instrument that is completely able to meet the well-known challenges of this complex and lengthy role. She has the goods to dispatch Act I’s flighty coloratura with consummate ease; she has good command of the mid-range conversational passages of Act II and hurls out the spinto outpourings of Amami Alfredo with thrilling commitment; and she is in total control of the weighted pathos and limpid lyricism of Acts II and IV. 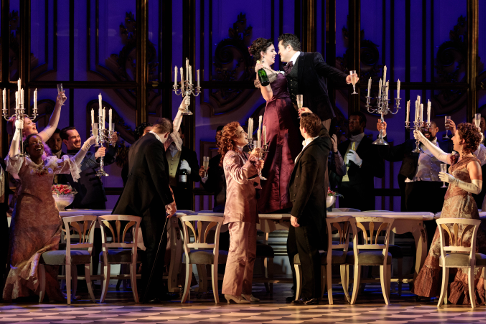 (Center) Amanda Woodbury as Violetta, Kang Wang as Alfredo and members of the ensemble

I have written before that Violetta, like Carmen, is a complex persona, sometimes enigmatic, often unpredictable, and endlessly malleable to the interpreter’s individual gifts. Amanda has at her command a surefire technique, a captivating vocal quality, and a heart-rending way with the many plangent sacrificial phrases. She is a wonderfully engaged actress who communicates the text with deep understanding, and vocalizes the part with a technique that is even and secure from top to bottom. The diva is also possessed of a lovely stage presence, making her Violetta assured and affecting.

As Alfredo, tenor Kang Wang reveled in the role, lavishing it with an assured lyric tenor of ample power and even production. Mr. Wang was able to encompass all of the sways of emotion the lad experiences, from unrestrained puppy love to discarded inamorato to penitent mourner. His confident singing wholly embraced Verdian styling, even though his instrument may lack just that final measure of Italianate squillo.

Adrian Timpau scored a huge success as Giorgio Germont, his large, incisive baritone filling the Alice Busch theatre to the rafters. Mr. Timpau nails both the ferocity and the compassion of the paterfamilias, and he invests his phrases with utmost meaning and clarity. His musical and theatrical journey with Ms. Woodbury in the great Act II duet was remarkably nuanced and gorgeously sung. 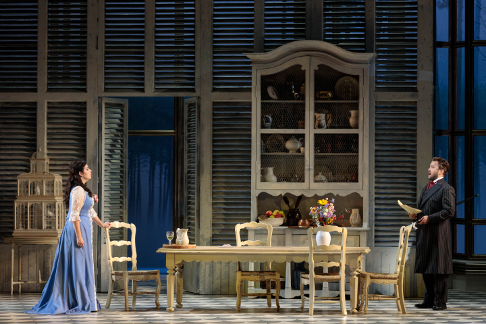 Amanda Woodbury as Violetta and Adrian Timpau as Germont

The production was all one could wish, handsomely elegant, atmospheric, and grounded in a highly effective concept. Director Francesca Zambello begins the piece in a tubercular sanatorium, where Violetta (and others) was abandoned to die alone. Peter J. Davison’s monumental set design fills the upstage with a foreboding, clinical looking framework. Violetta is in a humble iron bed swathed in a white sheet against the chill. And lo, when the Act I party begins, she strips away the sheet to be revealed in a ravishing deep violet gown, as she is joined by revelers in similarly dazzling party wear. The splendid array of costumes was designed by Jess Goldstein, while Samantha M. Wootten contributed a magnificent hair and make-up design.

Set-wise, we soon learn that the “wall” behind the metal framework is actually a row of periaktois that now turn to create a sumptuous Parisian salon, as the hospital bed disappears and two extremely long tables get pushed together to create a “Grand Opera” setting with great economy of means. Mr. Davison also gifts us with an inviting country kitchen porch for Act II, and a hot-blooded, red-hued casino in Act III complete with over-sized gaming tables. Mark McCullough has lit the whole affair with a knowing sense of mood and color, contrasting the spirited nature of the public gatherings with the impending tragedy that comes to the fore in private spaces. 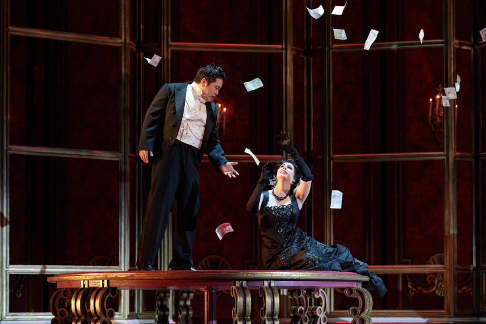 Kang Wang as Alfredo and Amanda Woodbury as Violetta

In spite of the expanse of the settings, Ms. Zambello has managed to create a very intimate experience through well-motivated blocking, carefully judged character relationship, and highly inventive stage business. I loved the way Violetta and Alfredo jumped on the long tables during the Brindisi walking to meet each other center above the heads of the other guests. And I loved that Alfredo mirrored that by jumping on a gaming table to denounce Violetta from above in Act III. There was wonderful use of a vase of flowers in Act II, which also had country farmhands parade across the back of the stage with a live chicken and dog. And then there was the spooky return to the sanatorium at the end of Act I. And, and, and. There were simply too many entertaining, illuminating, honest, heart-tugging moments to document here.

While Andrea Beasom contributed some clever choreography to enliven Flora’s party scene, it was emphatically Ms. Zambello’s creative staging combined with the sterling music-making and effective design that made this a La Traviata to treasure and cheer.