MÈdÈe has been greatly admired by following generations of composers especially for its orchestral interludes (and by a particular singer, Maria Callas, as a brilliant showpiece for soprano). With the Vienna Philharmonic in the pit the Salzburg Festival evidently invites us to consider MÈdÈe as viable dramatic music for now, not as an interesting relic for period instruments.
The spoken opÈra comique origins of MedÈe built a dramatic context for its several scenes and choruses, its three arias (DircÈ, CrÈon, NÈris), the grandiose duet (Jason and MÈdÈe) that concludes Act I, and MÈdÈe’s famed final scene — the murder of her two children. With spoken dialogues in opera long out of fashion Australian theater director Simon Stone turned to film aka movies, to televised news, to phone calls and to phone messages to absolutely overwhelm us with context.
Stripped of any of the trappings of French classical tragedy Cherubini’s MÈdÈe is a very small if a very smart piece of music. The Grosses Festspielhaus is very big. Stage director Stone’s movie (video) told a parallel story to Cherubini’s operatic sketch in huge black and white full stage screen images. The singers became film actors (and very good ones!) and went through the motions of a Salzburg couple’s marriage breaking up. The husband was unfaithful, and the ugly origins of the marriage (MÈdÈe’s betrayal of her father and murder of her brother) were never mentioned. Stage director Stone’s MÈdÈe was but an innocent victim.
As well there were huge black outs when all we heard in the total silence were the highly amplified, desperate phone messages left by the abandoned woman. 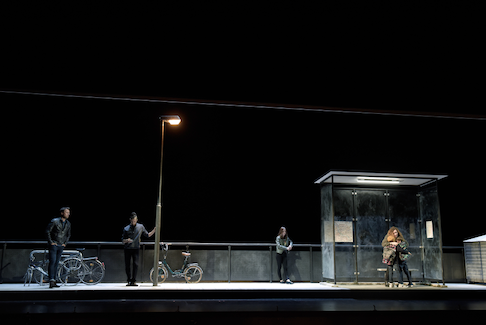 The bus stop where Janson entrusts the children to MÈdÈe

When the stage was not a giant movie screen stage director Stone made his stage set hyper realistic — a bridal shop, a night club with pole dancing, a hotel lobby, a hotel room with a giant TV screen and an a vista shower, a hotel banquet room with its restroom, a shabby internet cafe, an international airport, a bus stop and a gas station. Yes, it was a huge production.
Although at the end MÈdÈe shot gasoline all over the stage she failed to ignite it, depriving us of the spectacular conflagration that could have wiped all this excess out. The immolation was but a slight bit of theatrical fog and dim red light inside a shiny silver car, hardly the precise detail of the balance of the production.
There was infinite costuming detail, there was even a reference to cheap Turkish Airlines flights.The production seemed more Eastern European than Eastern Mediterranean. It is a co-production with Polish National OpÈra.
Cherubini’s opera MÈdÈe was a superfluous addition that all but disappeared in director Stone’s melÈe. The Salzburg Festival engaged German rare music guru, conductor Thomas Hengelbrock to mastermind our musical initiation into this rare opera. Certainly the extensive overture was beautifully rendered by the Vienna Philharmonic, however the seriousness of its structures and colors disappeared into the turgid divorce emotions occurring on the stage’s giant screen.
From time to time Cherubini’s MÈdÈe was able to catch our attention. The orchestral introduction to CrÈon’s aria was of Wagnerian proportion in its crescendo of power, the Act I duet finale captured a magnificent MÈdÈe rage. MÈdÈe’s confidant NÈris’ splendid aria in duet with a bassoon involved us and of course the famed finale in which MÈdÈe rationalizes the murdering of her children was spellbinding, though the immediacy and urgency of the performance did not reach the rear orchestra where I was seated. 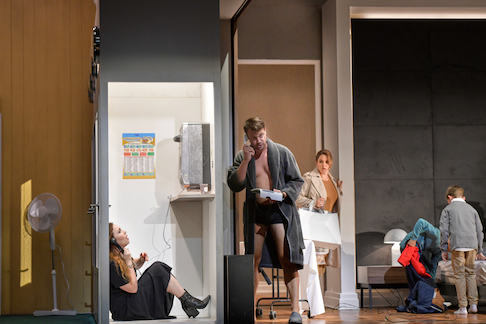 The Act 1 duet finale, MÈdÈe in a phone both far away, Jason in his hotel room, NÈris and children

Russian soprano Elena Stikhina effectively negotiated the role of MÈdÈe as required by director Stone. It was securely sung and effectively acted without finding mythic or even theatrical stature. Italian soprano Rosa Feola sang DircÈ’s complex air with assurance, her apparent vocal prowess barely tapped. Russian mezzo Alisa Kolosova made her aria of resolve to help MÈdÈe one of the evening’s high points. Neither bass Vitalij Kowaljow as CrÈon nor Czech tenor Pavel ?ernoch as Jason made sufficient effect. Both are estimable artists in the major repertoire on major stages, obviously not at home in early music.
The evident intention was to render Cherubini’s MÈdÈe a grand opera of dramaturgical complexity. The attempt was not successful.