Ruth Smith’s assessment of Handel’s last wholly new oratorio, Jephtha, has not been shared by all her fellow Handel scholars.
Composed by the aging composer in 1751, during a time when the onset of
blindness forced Handel to put the score aside for a while, Jephtha has been criticised mainly on account of what is perceived
to be Thomas Morell’s weak libretto. The substitution of a lieto fine courtesy of a descending angel for the Old Testament’s
brutal sacrifice of a military hero’s daughter was judged by Paul Lang to
be ‘nearly fatal to the oratorio’, and by Winton Dean to lend ‘a morbid
emphasis on virginity’.

Interestingly, the story of Jephtha, the leader of the Israelites who
inadvertently and tragically vows the sacrifice of his daughter after a
victory against the heathen Ammonites, drew the attention of Voltaire (in
the Philosophical Dictionary) who viewed it as
confirmation that his ‘Enlightened’ contemporaries should strive for a
civilised humanism in contrast to such biblical brutalities and barbarism
(and as an opportunity to attack the Jesuits). But, as Smith has observed,
Morell was a poet, an Anglican priest and a Doctor of Divinity, and as such
was, in contrast, concerned to use the oratorio form as a ‘contribution to
the defence of Christianity’. 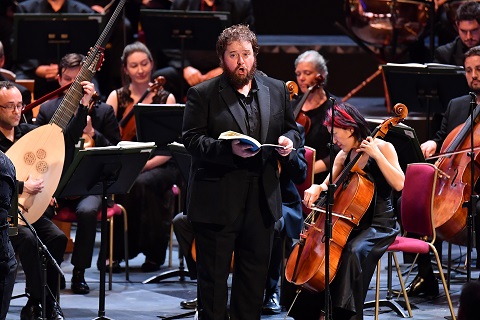 In this swift and sometimes rather stern Proms performance by the Scottish
Chamber Orchestra and SCO Chorus, conducted by Richard Egarr, such moral
and theological issues were essentially by-the-by; and, as Egarr strove for
energy and momentum perhaps, too, some of the work’s human anguish was
glossed over, and the emotional interaction between the protagonists in
this tragedy-turned-triumph weakened. But, this was still a compelling
account, characterised by superb choral singing and the direct
communication of events by a well-matched and accomplished team of
soloists.


(also with a libretto by Morell), for example, was somewhat lacking in
dramatic impact and propulsion. On this occasion, sensibly, what I
described as the ‘exquisitely beautiful poise and sensitivity’ of the
period-instrument Arcangelo was replaced by the more urgent, impulsive and
vibrant sound of the Scottish Chamber Orchestra – a sound which carried
with more vigour, with punchy accentuation, strong dynamic contrasts and
strikingly dark colourings at times, though Egarr ensured that the strings’
bowing was idiomatically stylish, and the tone did not lack Baroque bite.

Many numbers were omitted (particularly choruses – even one reproduced in
the Proms programme was excised) and da capos were frequently truncated or
deprived of their contrasting B sections – but the swiftness bestowed a
freshness and resolve fitting for this dramatic episode from the Book of Judges, in which Jephtha accepts the Elders’ entreaty that
he lead Israel in war against the tyrannical Ammonites on condition that he
remain Israel’s leader after the war, and vows that if he is victorious
then the first thing that greets him on his return home will be Jehovah’s,
offered as a burnt sacrifice. Morell created additional characters – StorgË
and Zebul, Jephtha’s wife and brother respectively, and Hamor, a young
soldier in love with Iphis (Jephtha’s daughter, so-named by Morell).

It was a pity, though, that the SCO Chorus’ contribution was curtailed, so
spirited were they as priests, virgins and commentators, so vivid are
Handel’s choruses. The diction of the collective was superb – no mean feat
in the RAH – and each time the choric voices entered there was a dramatic
and emotive ‘uplift’: from their first optimistic denunciation of the
Ammonites whose demise they brightly anticipate; to the imitative intensity
– wonderfully sculpted by Egarr – of the end-of-Act 1 pugnacious eagerness
– coloured richly by the horns; to the skilfully balanced vocal reflections
on the Lord’s decrees which follow Jephtha’s acknowledgement that his vow
must be fulfilled. Here, the strings’ tight dotted-rhythms accrued a
tension which exploded with the tenors’ and sopranos’ culminating vehement
blast, “Whatever is, is right”. Emphasising, through silence and
disjointedness, the shocking bluntness of this cry, Egarr paradoxically and
provokingly suggested doubt rather than moral or theological certainty. 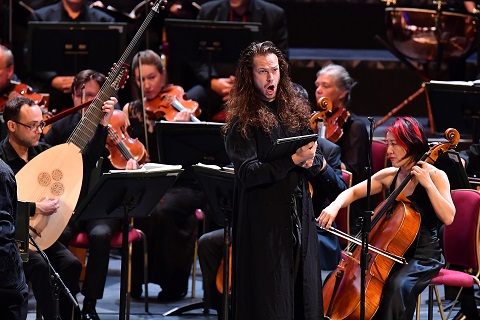 Cody Quattlebaum’s firm bass-baritone was the first solo voice that we
heard and, as Zebul, his eloquence and directness was an engaging
invitation to the drama. In the title role, Allan Clayton’s relaxed legato
line conveyed an assured authority without imperiousness, though perhaps he
did not entirely convince as a ‘military hero’. Egarr, almost hyperactive
in his multi-role as harpsichordist, conductor and energiser, ensured that
the SCO contributed much to the emotional spirit of the arias, and one
could appreciate this in Jephtha’s Act 2 ‘Open thy marble jaws, O tomb’,
when he realises the nature of the sacrifice his vow will compel him to
make; here, the tautness of the unison strings’ rhythms and the darkly
driving cello and bass line in the B section of the da capo conveyed all of
victorious warrior’s inner conflict between resistance and submission.
Similarly, reflecting on the pain that pierces “a father’s bleeding heart”
when confronted with Iphis’ acceptance of her fate, Jephtha’s plaguing
guilt was evoked by the strings’ full, emphatic pulsing beneath Clayton’s
resolute melody. In contrast, ‘Waft her, angels, through the skies’ – one
of Handel’s supreme, time-stopping melodies – unfurled with exquisite
beauty and lightness. 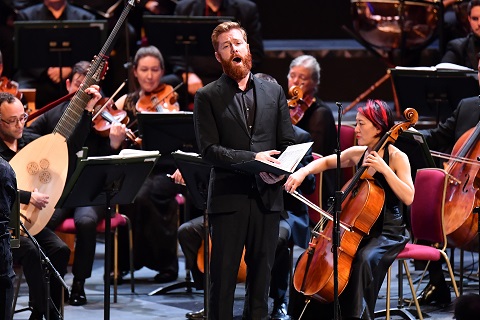 As Hamor, counter-tenor Tim Mead was as, if not more, impressive, singing
with sweetness and strength of his unfulfilled passion for Iphis’, and
finding a wealth of colour in his duet with his beloved. In the latter
role, soprano Jeanine De Bique displayed a pleasing tone and a clear focus,
communicating a fitting purity and innocence but lacked variety of colour
and nuance. Her final aria, ‘Farewell, ye limpid springs and floods’ did
not suggest the inner torment that Iphis surely must feel, despite her
avowed anticipation of heavenly peace.

Both De Bique and Hilary Summers struggled a little to project to the far
reaches of the Hall, but Summers was a composed and very expressive StorgË,
whose maternal reflections on the injustice of her daughter’s fate were
compelling – again, the emotional import was underscored by Egarr’s
encouragement of the double basses’ dark throbbing.

The ensembles were urgent, the Act II quartet surging segue from
Hamor’s aria in which he offers his own life to save Iphis, and the Act III
quintet bursting with joy. (Donald Burrows suggest that this quintet ‘All
that is in Hamor mine’ – not ‘is mine’ as misprinted in the programme – is
of doubtful authorship and was added in 1756.) The angelus ex machina had intervened in the form of Rowan Pierce’s
sparkling, soaring saviour, promising Jephtha that he can fulfil his vow
without sacrificing his daughter … if he dedicates her to God in
‘Pure, angelic, virgin-state’, for ever. One might question the ‘happiness’
of this ending, especially on Hamor’s behalf, but here the jubilant voices
of the SCO Chorus rang out, rejoicingly, “in blessings manifold”.