That’s four solid hours of music — six arias and four duets (plus an introduction and two finales). Rossini scholar Philip Gossett asserts that Rossini will have never heard this, his last tragedy, performed uncut. We owe the privilege of hearing every last note to the Rossini Opera Festival which is obviously obliged to perform the entirety of its critical editions.
It was a long evening, very long, and a surplus of pleasure, notably two splendid singers, Georgian soprano Salome Jicia as Semiramide and Armenian mezzo soprano Varduhi Abrahamyan. Both singers made big impressions in their Pesaro debuts, the 2016 La donna del lago, and they return now with even more confidence and fully mature techniques.
Adding to the evening’s glamour was Pesaro conductor Michele Mariotti, son of Gianfranco Mariotti founder of the Rossini Opera Festival. Though rarely on the podium at the Rossini Opera Festival, conductor Mariotti is often on the podiums of the world’s most prestigious opera houses and festivals. Mo. Mariotti brings impeccable taste to informed contemporary Rossini style, and a musical confidence that pervades every moment on the stage.
Unlike most Rossini operas Semiramide possesses an elaborate overture (double winds plus four horns and three trombones as well!) that is specific to its musical content. It unfolds in a sumptuous horn quartet duet with the two bassoons, it makes surprising effects with its piccolo solos and it well exploits Rossini’s love of playfully passing lines between the woodwinds. Mo. Mariotti’s overture deservedly earned one of the evening’s hugest ovations.
Semiramide is the shocking story of a queen who was an adulteress, a murderess and guilty of incest as well. Maybe back in 800 BC the story was historical fact, but nearly all subsequent Western civilizations have put their spin on its happenings, including Rossini’s librettist Gaetano Rossi who rendered it into the thirteen musical numbers that offer singers with spectacular techniques the chance to show-off. 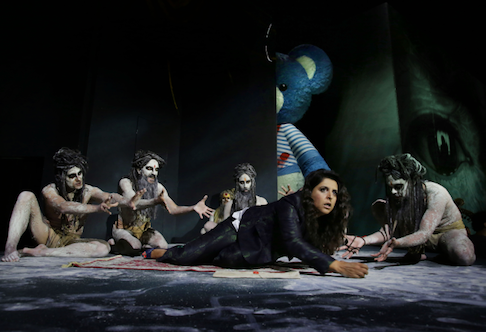 Just now in Pesaro stage director Graham Vick brought Rossini’s Semiramide into the twenty-first century playing heavily on contemporary sexual ambiguities, and teasing us with a huge, cartoon teddybear image to remind us that an innocent young child is mixed up in the story’s brutality. The entire four hours unfolded under or within the age-withered gaze of the man Semiramide murdered — her husband, the king Nino, the father of her son — and the reverse side of that huge image (the two stage wagons were turned around) where childish drawings were scribbled on the blank surfaces between the wagons’ structural supports.
The stage metaphor was of utmost simplicity, but reeked of theatrical complexity. We understood that Rossini’s musical language was transformed into a language of contemporary theater, and that it spoke to us not as a straightforward locale in which Rossini’s singers sing, but as the world we live in, where we feel and know but that we do not define.
Semiramide wore pants, high heels and a severe short haircut. She was a powerful woman who dominated men and their destinies. The young general Arsace wore a black pants suit with only a gold shoulder braid to indicate military rank, and with ample dÈcolletage to boast a well endowed female breast. The sexual tension of forbidden desire rose to a nearly unbearable level as we watched and listened to these two young, powerful women negotiate their famed duet “Serbami ognor si fido il cor.”
The high priest Oroe, bass Carlo Cigni, connects Graham Vick’s post modern world to a netherworld. He was some sort of high priest (guru) of a primitive culture having, supposedly, greater access to the earth’s truths. He had a number of similar undressed acolytes who made the fawning motions of clueless cult followers, mindlessness that echoed the innocence of the teddybear. Oroe’s dictums from the netherworld caused many, but hardly all of the problems.
Semiramide’s daughter Azema appeared in virginal white standing high at the side of the stage under a childish scribble of the sun. She was the contested prize (the prize includes becoming king of Assyria). She has little to sing in Semiramide’s ten arias and duets. The contenders for the throne are an Assyrian prince, Azzur, dressed like an early twentieth century Prussian prince, and an Indian king, Idreno, dressed as an exotic Indian king. Both of these men of course have a lot to sing about over then next few hours. 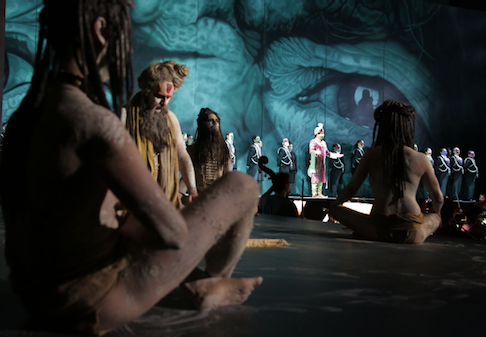 Here’s the catch: Rossini and his librettist established a basic four part model for all of Semiramide’s arias and duets, beginning with a cantabile (melodic) section followed by a chorus and recitative that changes the situation. Then there is the cabaletta (a livelier reaction to the situation), and finally a repetition of the cabaletta wherein the singer shows his stuff (added ornamentation). This is a long, drawn out process (and there were ten of them) that at best allowed us to know each of the characters and to know its singer. And at worst to tire us beyond caring.
The matricide that ends the opera packed a wallop. We did indeed know Semiramide and her son Ninia who had become the general Arsace. Even knowing Semiramide’s nefarious actions we still did care about this tragic queen, and we did feel the complexity of emotion that gripped Arsace in murdering his mother. The tragic irony that made him Assyria’s king hung heavily.
Far more than staging an evening of brilliant singing director Graham Vick created an event of monumental tragedy. It was effected by the brilliant singing and acting of Salome Jicia as Semiramide and Varduhi Abrahamyan as Arsace. Rossini’s melodramma tragico was in fact a quite successful sung tragedy.
The splendid cast included the Azzur of Argentine baritone Nahuel di Pierro and the Idreno of tenorino Antonino Siragusa as the rivals for the hand of Semiramide’s daughter Azema sung by Romanian mezzo-soprano Martiniana Antonie. Bass Carlo Cigni sang the high priest Oroe and Russian bass Sergey Artamonov sang the two brief interruptions of the ghost of the murdered king Nino. The captain of the royal guard, Mitrane, was sung by Alessandro Luciano.
Mr. Vick’s associates in creating this production were his long time collaborators Stuart Nunn (sets and costumes) and Giuseppe di Iorio (lighting).
The performances took place in the Vitrifrigo Arena (Vitrifrigo is a Pesaro company that makes miniature refrigerators and freezers), formerly the Adriatic Arena. I attended the third of four performances on August 20, 2019.