She loves her fiancÈ for his looks and her tutor for his learning. A well meaning servant spreads the rumor that she is really a castrato male posing as a female to avoid military service. Its two acts are essentially three or more easily imagined farces.
?Rossini began working in opera houses at the tender age of nine, thus he absorbed an already formulated and very rich opera buffa tradition. Just now in Pesaro from the first notes of the overture conductor Carlo Rizzi discovered the unique Rossini beat and fanned hints of the famed Rossini crescendo [like, sort of, Ravel’s Bolero only infinitely faster], and unveiled the melodic inflections that presage the great Rossini. It was the same overture Rossini had used for his first farce, La cambiale di matrimonio (1810) and that he would use again for his opera seria Adelaide di Borgogna (1817).
?With the exception of a fine quartet and then a truly delightful quintet in the first act, and Ernestina’s rondo in the second act the musical numbers are generic buffa. Of far greater interest is the libretto, by one Gaetano Gasbarri whose day job was as registrar of the Grand Duchy of Tuscany (the program booklet is very informative). First and foremost Sig. Gasbarri’s libretto is a spoof of exalted literary language, and second and foremost as well it is a compendium of sexual innuendo and double entendre. The censors axed the production after only three performances.
But not before the combination of musical genius and licentious scandal had brought Rossini his first fame.
For the occasion the Rossini Opera Festival added supertitles (that are not always provided), and for the very international audience even duplicated the supertitles in English, a first! Of course the words fly by at a speed that precludes getting your mind around verbal subtlety, but we did pick up enough to be greatly amused. The pleasure and reported displeasure of the audiences for those three 1811 performances in the more intimate spaces of Bologna’s Teatro del Corso can only be imagined. [This grand old theater was destroyed in 1944 by a WWII bomb — Bologna was a fascist stronghold.]
The Rossini Festival invested considerable artistic capital in the production besides conductor Rizzi, namely the French stage director team Moshe Leiser and Patrice Caurier, noted for their precise, conceptual minimalism. The single unit set was a wall making a symmetrically broken line, covered with a repeated, regal pattern upon which there was a grandiose painting of several cows (Ernestina’s father was a nouveau riche farmer). The first act was animated by tasteless, often obscene physical gestures. In the second act the set itself did some tricks that were amusing thus relieving somewhat the visual boredom and enlivening the farcical storytelling. 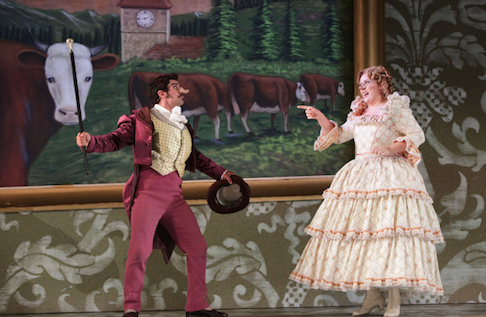 Of equal point were the costumes, most notably the additions of prosthetic noses added to all the faces, thus making sure that we accepted the personages as bizarre (we did indeed). To great effect was the artificially puffed out chest and thrust back butt (the rooster strut) of Ernestina’s rich fiance Buralicchio well matching the three grandly laced tiers and frilly dÈcolletage of Ernestina’s very big white dress. Enestina’s father Gamberotto was in a fat suit extolling the pleasures of his wealth, and Ermanno, her tutor was in the clearer colored, slimmer fitting clothes of the victorious suitor.
Buralicchio comes to believe that Ernestina is a male, though Ermanno has not yet heard the rumor and effects a bedroom tryst with Ernestina. We too began to see male characteristics in Ernestina, and in the duet we began to confuse the tenor voice with the mezzo (contralto) voice. The very informative program booklet tells us that the part of Ernestina was composed for a famous contralto named Maria Marcolini, of reported androgynous voice. In fact the tessitura in which Ernestina sings is often in virile territory — mezzos at that time were the descendants of castrati (and there were still plenty of real castrati around). 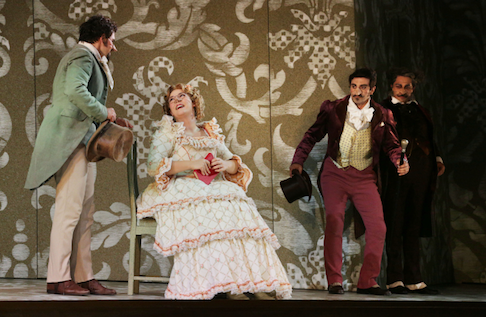 L’equivoco stravagante was brilliantly cast. Mezzo soprano Teresa Iervolino could produce those virile tones, and as well move into the higher reaches where she managed effective mezzo-soprano fioratura. Her movements hinted at the clumsiness of a male impersonating a female. Bass baritone Paolo Bordogna was the indefatigable Gamberotto, a splendid basso buffo well known to Pesaro audiences. Though you might have expected the patter from Gamberotto, Rossini instead assigned it to the Buralicchio where it was well integrated into Davide Luciano’s strutting. Russian tenor Pavel Kolgatin ably executed the florid lines of the tutor Ermanno.
Not to forget the opera buffa’s two stock trouble makers, the servants Rosalia sung by Claudia Muschio and Frontino sung by Manuel Amati.