The premiere was June 21. However Franco Zeffirelli had died on June 15 at 96 years of age. This, his final production, is a monument to the accomplishment of one of the great stage directors of the 20th century. He was a director who earned huge fame collaborating with diva Maria Callas at Covent Garden and Dallas, earning additional recognition in the U.S. for his spectacular productions of Aida and La boheme at the Met. Zeffirelli was a prominent participant in the Italian operatic establishment who, as well, was elected a senator in the Italian government, a member of Berlusconi’s Forza Italia.
The new Verona La traviata, of unimaginable magnitude, is nothing if not monumentally spectacular. Not an easy feat when you consider that La traviata happens in a couple of Parisian drawing rooms, the parlor of a country house and in a humble bedroom. It is a quite domestic melodrama. 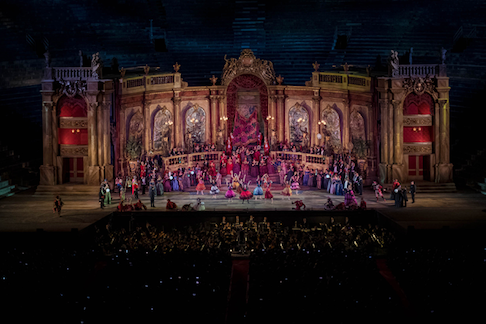 Act II, scene 2
But even by Arena di Verona standards the Zeffirelli production holds its own scenically with the repertory’s greatest (most popular) public tragedies (Aida, Trovatore, Otello, etc). This is accomplished by the sheer size and amount of constructed scenery that you see when you enter the 2000 year-old arena. You are then astonished when a major transformation takes place a vista during the first intermission, and knocked over at the second intermission when it becomes yet another constructed space for the multitude(s) of guests and revellers at the gambling party, a multitude of dancers and musicians, and a bevy of acrobats (etcetera) who are having a great celebration until things get ugly (but only incidentally to the revelry).
It is fair, well obvious to say that opera at the Arena di Verona is opera as spectacle, not opera as theater. This explains the broad appeal of its productions, and the 13,500 spectators who fill it for each of the 42 performances of 4 operas this summer (there are eleven La traviata performances). The attraction for serious opera goers is the variety of artists. including the who’s who of the conductors and singers who perform on the world’s major stages. But the vast majority of the spectators are there for the spectacle, and to participate in this ancient Roman and now venerable Italian summer ritual.
Actually by Arena di Verona standards it is an intimate set as Mr. Zeffirelli’s set is always nothing more than a back wall that limits the action to the horizontal playing area in front of it, be it hundreds of feet wide. It is hard to say if this high wall significantly affected the acoustic. There was the surprising moment in the first act when Violetta and Alfredo climbed up to a cubicle built into the wall (an intimate room) when their voices took on far greater magnitude, perhaps a hint of the acoustic that extends sounds to the very far distant, always packed upper reaches of the arena. 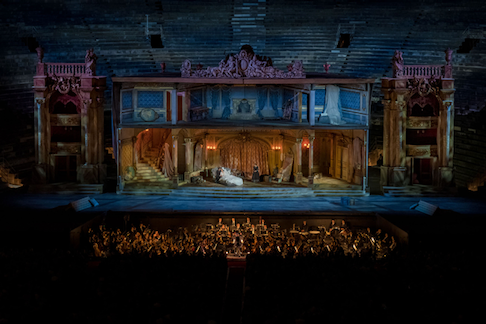 Act III, Violetta in white
Italian conductor Daniel Oren conducted the performance I heard, keeping the orchestral and choral forces in check, and working with the singers to achieve maximum vocal projection while respecting their usually considerable artistry. This was particularly evident in the beautifully schooled Violetta of American (Louisiana) soprano Lisette Oropesa (one of four Violettas). The previous summer Mlle. Oropesa sang the title role in Rossini’s Adina in the 850 seat Teatro Rossini in Pesaro, thus it was quite a step up to sing Violetta in Verona. Her very beautifully phrased Violetta was not of sufficient magnitude to capture the hearts of 13,000 plus spectators though they dutifully applauded.
77 year-old Leo Nucci sang Germont (one of five Germonts for the run, including Placido Domingo). At this point one admires his old-school style rather than lament the ravages of time on a once beautiful voice. Maestro Oren is greatly appreciative of his singers (after an aria he always applauds them with the rest of us), and for Mr. Nucci he went wild. Italian (Arezzo) tenor Raffaele Abete (one of four that included Vittorio Grigolo) sang Alfredo. Mr. Abete, recent winner of a Arena di Verona sponsored voice competition, confused strutting with acting and substituted energy for phrasing thus erasing all effect his fine tenor voice may have made.
The opera festival at the Arena di Verona has been around for more than 100 years! That it is a marvel of production and a masterpiece of crowd control only magnifies the magic it has created at every performance I have attended over the years.
Michael Milenski