Chelsea Opera Group has performed it at least twice, Sir Colin Davis
persuaded the London Symphony Orchestra to produce it in concert not once,
but twice, and I am sure there are other performances I have missed.
Counting stagings in Amsterdam (by Tim Albery in the 1990s) and Strasbourg,
I have seen the opera eight times, not bad for such a rarity.

The way that Benvenuto Cellini continues in the repertoire, in
some form, is perhaps an indication of the affection with which the piece
is held; despite the difficulty of the music and the craziness of the
dramaturgy, the work’s sheer invention, imagination and energy carry you
away. Sir John Eliot Gardiner continued the tradition by bringing his
concert staging of Berlioz’ Benvenuto Cellini to the BBC Proms.

Benvenuto Cellini
has a complex textual history, Berlioz wrote it in 1836 and it was
performed at the Paris Opera in 1838 but was not well received and only
received five performances. From there it languished until Franz Liszt put
the work on in Weimar in 1852 with Berlioz extensively revising it and
Liszt suggesting cuts. From 1838 we can trace at least three versions, two
of which are reconstructed and recorded, the opera as Berlioz first wrote
it, before it went to the censors, the opera as first performed by the
Paris Opera and the work as recorded in the Paris Opera archives after
Berlioz’ further cuts during its run at the Opera, as he tried to salvage
what he could from a disastrous run. Another problem when producing the
Weimar version is that Berlioz’ revisions are mixed up with Liszt’s
swinging cuts designed to bring the running time into something acceptable.
All this means that each performance takes its own route through the
textual maze; the original version is full of good things which Berlioz
later cut but is also a sprawling mess in dramatic terms.

In fact, there is one more version of the opera! Berlioz original plan was
for an opera comique, but it was turned down so when approaching
the Paris Opera with the idea the spoken dialogue had to be dropped. But
the French vocal score was published with cues marking the dialogue, and a
revival with dialogue, was planned at the ThÈ‚tre-Lyrique in l856 (though
this did not happen).

At the BBC Proms, John Eliot Gardiner made his own selection (based on Hugh
Macdonald’s critical edition), so what we heard was 1838 with some elements
of 1852. The result was long and full of felicitous detail omitted in the
1852 version, and had moments which were truly delightful but which,
frankly, held up the action. But then, if one wanted tight, focused drama
one would not listen to Benvenuto Cellini; its charms are those of
the sprawling, riotous carnival which it depicts at the end of Act One.

aptly sums up the differences between the various versions.

The title role is impossible. The first Benvenuto Cellini, Gilbert Duprez
(who created Edgardo in Donizetti’s Lucia di Lammermoor and who
was the first tenor to use chest voice for Arnold’s top C in Rossini’s Guillaume Tell) hated it. The role calls for flexibility,
strength, stamina (the 1838 version is a long sing) and an ease in the high
register, combined with a sense of comedy! No wonder opera companies shy
away from it. The first Benvenuto Cellini in the revised, 1852 Weimar
version was the first Lohengrin which perhaps indicates the
direction some of the 1852 changes were going. 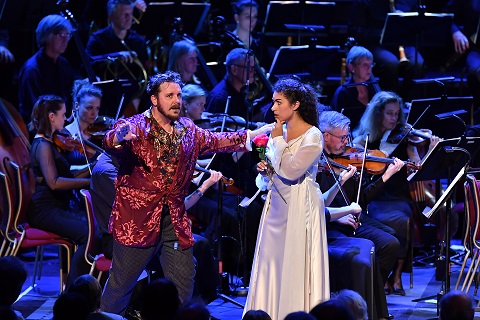 At ENO in 2014 Michael Spyres had already shown that he is in many ways the
ideal protagonist: he has sung a lot of early 19th century French opera,
can cope with the devilish complexity of Berlioz’ writing and is an apt
comedian. The whole of the first scene in Act One was delightful, as Spyres
despatched Berlioz’ music with style, wooed Teresa with sly charm and was
rather funny. His narration of his escape during the first scene of Act Two
was equally fun, and you could appreciate Spyres’ attention to the words,
always important in this work.

There were some profoundly beautiful moments too, notably Cellini’s Act Two
solo when he sings of the simple life, but in some later high passages we
were also aware of Spyres managing his voice. This was his third
performance in the role in five days: the production had been seen at the
Festival Berlioz, La CÙte-St-AndrÈ on 29 August, and the Berliner
Festspiele, Berlin on 31 August, and travels to the OpÈra Royal, Palace of
Versailles next Sunday. That is quite a punishing schedule for such a
taxing opera.

The beauty of Spyres’ performance was that he wasn’t just a comedian, but
also brought out Cellini as the serious artist as well, and he really made
the most of the quite full version of the piece that we heard, making all
the felicitous details count. We were really rooting for him, so that the
final casting scene was edge of the seat stuff, in all the best ways.

Sophia Burgos made a delightful Teresa. Perhaps her voice was slightly
small for the Royal Albert Hall, but then this is hardly the best venue for
Berlioz’ serio-comic opera. Burgos combined dextrous facility in the vocal
writing with immense charm and a strong sense of character, which made her
anything but a passive victim. She and Spyres made a fine pairing,
particularly in the Act One love duet, and her solo in Act Two (when, in
Cellini’s absence Teresa has to cope with the workmen going on strike)
showed Burgos’ real metal. This is not an easy role to sing, and the great
virtue of Burgos’ performance was that we forgot the difficulty of the
music and simply enjoyed her warmth and charm. 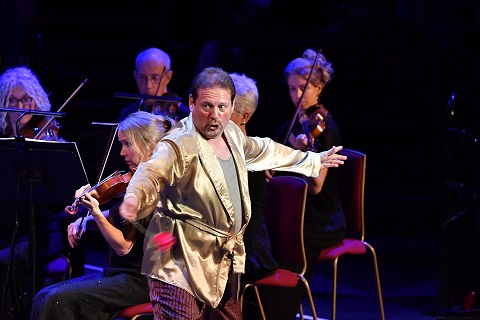 Fieramosca, the Pope’s official sculptor and Cellini’s rival suitor for
Teresa’s hand, is technically a comic role – he is perpetually the butt of
Cellini’s manoeuvrings and always seems to come of worse. I have always
loved the Act One trio, where Cellini instructs Teresa about the plans for
tomorrow’s carnival, and then when they repeat them, Berlioz adds a third
line for Fieramosca who is now listening. It is very funny, and dazzling
musically, and perhaps sums up Benvenuto Cellini. Lionel Lhote
made Fieramosca a wonderfully funny character, a hapless schemer who
always failed, but he brought rumpled charm to the role and had the right
sort of presence to be threatening too, and he sang very finely indeed.
This was no buffo bumbling, but Berlioz’ high baritone line beautifully and
dextrously sung.

The smaller roles are also highly important in this opera, and there is a
strong ensemble element to the piece requiring a well-balanced cast. At the
Royal Albert Hall we had a series of well-drawn characters, but also a
sense of ensemble too. 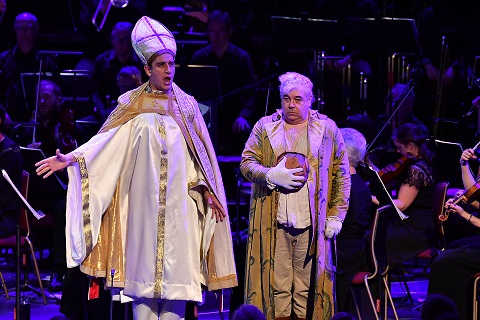 AdËle Charvet was a charming Ascanio, complete with a fine youthful
swagger. Ascanio is not a huge role, but Charvet gave the young man strong
personality, and she made the most of her delightful (yet dramatically
redundant) Act Two aria. Maurizio Muraro was a finely comic, very buffo
Balducci (Muraro was a last-minute replacement for Matthew Rose). Tareq
Nazmi was very funny indeed as the Pope, here a frankly comic character
prone to falling asleep. Ashley Riches and Vincent Delhoume (repacing
Krystian Adam) were Cellini’s co-workers Bernardino and Francesco, always
popping up and contributing much by their double act. Peter Davoren and
Alex Ashworth (both from the Monteverdi Choir) provided finely comic cameos
as the Innkeeper and Pompeo.

The staging by Noa Naamat was simple but effective, and she did not shy
away from any of the librettos requirements, so we had a carnival scene,
and we had the casting of Perseus (though embodying the statue on stage in
the person of Duncan Meadows was perhaps unnecessary). Essential to this
was the Monteverdi Choir which sang with focused dexterity and power, yet
also entered with a will into the whole of the action, erupting on stage
during the carnival.

The whole performance had a rhythmic tightness and brilliance which belied
the music’s complexity and Gardiner’s speeds certainly took no prisoners so
that the Carnival scene was completely dazzling in many ways as choir,
soloists and orchestra articulated Berlioz’ busy and complex rhythms whilst
keeping the whole sparkling and fun. The finale, with the casting of
Perseus, was equally devastating.

It was here and in other moments that we could really appreciate the period
instruments. The narrow bore brass, including cornets as well as trumpets,
and an ophecleide (!) made a strongly characterful impression without
overbalancing in the way can happen with modern instruments and the period
wind (with four bassoons) were similarly characterful and colourful. And it
was this sense of a wider range of colour that we took away from the
performance, something that Gardiner seemed to relish. The period strings
were lighter in colour and far less dominant in the busy passages, making
the whole full of lovely detail, which meant we could appreciate the sheer
skill of all the performers.

This was a performance which positively sped by, the sprawling drama
overflowed the whole Royal Albert Hall stage and erupted in a carnival of
delightful moments, but Sir John Eliot Gardiner kept things flowing and
moving, always aware of the need for pacing and the importance of making
the details build into something greater. Whilst Michael Spyres charming
rogue was at the centre, this was a finely balanced ensemble cast which
made this most tricky yet engaging a complete delight.


The performance is on