After its rejection by Covent Garden, which had originally commissioned the
work for performance (in English) in 1958, the opera was extensively
revised, including the removal of its spoken dialogue, and it premiered in
Zurich in 1961 – two years after the composer’s death.

Based on Nikos Kazantzakis’s novel Christ Recrucified and staged
in its reconstructed original version, the work’s moral weight, underlining
humanity’s grim record of spiritual and political failure, comes at a time
when its plea for tolerance and Christian charity could not be more
relevant. It is no coincidence that in recognition of its initiatives for
refugees and asylum seekers Opera North is the first opera company in the
UK to be awarded Theatre Company of Sanctuary status.

So why has this score taken so long to be fully appreciated? It’s very much
a people’s opera; direct, uncomplicated and very moving. It tells the tale
of a remote Greek community preparing for its traditional Passion play.
Disturbed by the arrival of a group of starving refugees whose homes have
been burnt by neighbouring Turks, the villagers are divided between
offering help and turning their backs. Along the way, those cast in the
Easter play begin to assume aspects of the characters they portray and as
Manolios (the local shepherd boy) as Christ and his Apostles grow quite
literally into their roles the village elders fear for their own spiritual
authority and a fatal outcome is the tragic denouement. 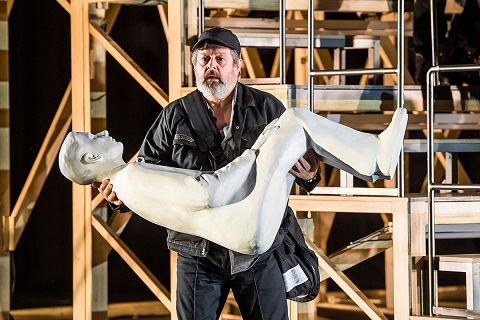 Director Christopher Alden opts for a minimal set and modern dress and,
with designer Charles Edwards, provides an unflinching commentary on
society’s response to asylum seekers, representing the refugees as lifeless
mannequins – a nod perhaps to Anthony Gormley’s figures, with their
identical and expressionless faces. But right at the start, before the
villagers appear for their Eastertide lots, a lone plaster figure is seen
carried off stage, an ambiguous gesture conveying kindly support or
calculated removal. Consideration for the refugees is shown by Manolios
(Nicky Spence) and Katerina/Mary Magdalene (Magdalena Molendowska) who
offer food and shelter the refugees on a nearby mountainside, its steep
contours evoked by the tiered staging. Indifference comes from the
village’s cold-hearted priest Grigoris (Stephen Gadd) who blames the death
of one of the newcomers on cholera, and the refugee’s corpse floats
skywards but remains visible to haunting effect. 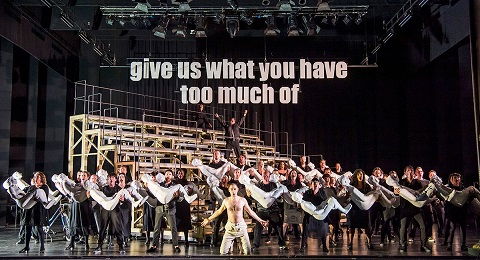 Alden has updated some of the text, including a humorous cry of “bloody
vegans”, and the refugees’ plea “give us what you have too much of” hangs
in block lettering over the stage as a reminder of their plight. Lighter
touches include an egg-throwing Easter Bunny (its ritualistic generosity
clearly only temporary), an onstage Klezmer-style trio play for the rustic
wedding celebrations of Niklios (Alex Banfield) and Lenio (Lorna James),
and a local postman Yannakos (Paul Nilon) who makes his deliveries on a
bicycle. Beyond these comic interventions, there is a dark centre to this
staging, most obviously conveyed by Manolios whose burden of a wooden cross
forms the work’s central drama within a drama. 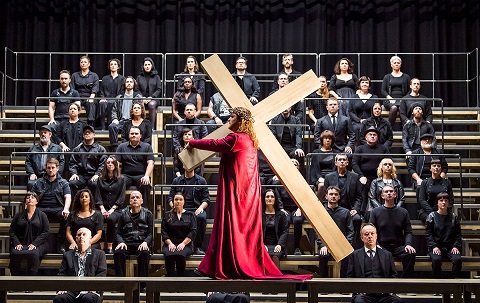 
Musically, The Greek Passion dazzles too, weaving its spoken text into
an eclectic procession of

styles bearing cinematic delivery: Greek Orthodox chant rubs shoulders with
folk-inspired passages, opulently scored scenes yield to a single strand
with ethnic colouring, and there’s even a passage straight out of Music
Theatre redolent of Leonard Bernstein. Above all, it’s a vivid score marked
by an ardent lyricism, to which the Orchestra of Opera North under their
musical director designate Garry Walker respond with much refinement. 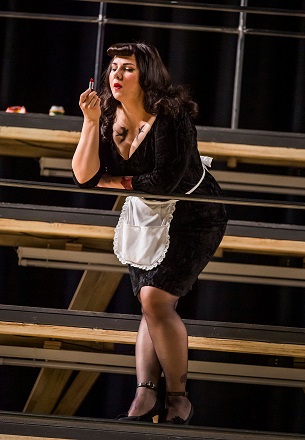 There’s tremendous commitment too from a well-chosen cast that includes the
radiant soprano of Magdalena Molendowska, Nicky Spence’s clarion tenor, as
the tormented Manolios, and a well-projected Paul Nilon as the appealing
Yannakos. Stephen Gadd wields a rich baritone as the assertive and scheming
Priest and John Savournin commands our sympathy as the refugees’ spiritual
guide, Fotis. Jeffrey Lloyd-Roberts convinces too as a beer-swilling Judas,
as does Steven Page’s Captain, an addled war veteran. Finally, the expanded
Opera North Chorus are all on excellent form, relishing their sacred and
secular input.