If the Royal Opera’s revival of BenoÓt Jacquot’s 2004 production of Werther was in anyway rescued it was almost entirely down to the
conductor, Edward Gardner, and the magnificent playing of the orchestra. It
was, in fact, rather symphonic, almost epic in scale. I’ve often found
Gardner willing to linger, almost be rather self-indulgent, in his
conducting, but here he was quite the opposite – fluid, lithe, yet more
than capable of generating a searing passion in the orchestra’s playing,
something which was often missing on stage. Acts I (especially) and II
still, typically, felt much longer than they were – but this is so common
in this opera one just expects it. I’ve rarely heard a more thrilling, more
Wagnerian, opening to Act I – but then Massenet rather loses the plot until
the staggering depth he somehow brings to Act III. And perhaps it was down
to the exceptionally powerful and urgent conducting of Gardner, but this is
where the evening turned into something that veered towards being
memorable. Just a little of Tristan to wash away whatever had
happened before.

Jacquot’s production is in the tradition of Grand Opera, the height and
depth of it often impressive. It’s undeniably elegant, though I’m probably
not the only one who found the design of Act II giddying, nor the long
corridor of open doors in Act III, centre stage, a little derivative of
Velasquez’s Las Meninas. There are moments the design seems out of
sync with the libretto – Johann and Schmidt, perched on a wall drinking,
yet singing of a beautiful day under a gorgeous sun when the backdrop is of
a sky leaden with thunder, seems careless. The assumption that cluttered
stages make for clumsy acting is often correct, but Jacquot’s idea that
huge sets dominate here works both for and against this production. As a
depiction of a couple whose passion is a conflict of the platonic and the
sexual, of the intimate and the distant, and of the hopeful and the tragic
the sheer size of the staging can only really portray one element of this
at the expense of the other. But perhaps the staging was an irrelevance
because there was little in the way of intimacy, sexual or otherwise,
between Juan-Diego Florez’s Werther or Isabel Leonard’s Charlotte. 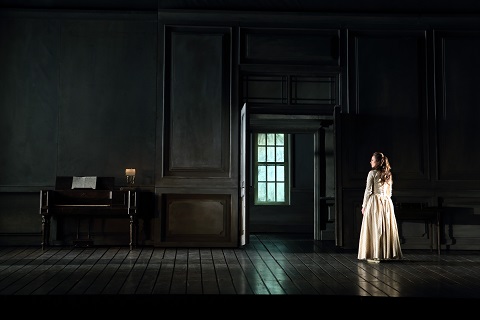 I’m not really sure how much of this had to do with Florez himself, a
singer whom I have often thought is very much an acquired taste. This was
his first London Werther – though the role is not unfamiliar to him. It’s
always been the case that Florez’s acting has been somewhat stilted, even
unconvincing. What was interesting about the performance was that in the
first two acts, which generally require the voice to have both longer lines
and be more lyrical, it pressed him harder and strained him more. The
unease was palpable, the voice clearly so small, especially at fortissimo, it was sometimes just ravaged by the orchestra. Yet,
he was like a man reborn by Act III – if hardly of the suicidal bent. The
youthfulness of the poet from earlier assumed a maturity which suddenly had
depth and richness – this was a Werther in reciprocity with his Charlotte.
Florez’s middle register has undoubtedly darkened over the past couple of
years, it’s both fuller and richer – pretty much ideal for the Werther of
Act III, which it clearly was here. His pianissimos were gorgeous,
breath-taking in fact, and if the high A’s in Act III sometimes betrayed
reserves of power that weren’t always available to him it was less
obviously a problem than earlier in the evening.

There are better singers as Werther – Kaufmann, for example – who just seem
to be tragic in this role. If Florez probably lacked soul, there
was a softness to this portrayal which was touching. He probably benefitted
from Gardner’s fluid tempo – any broader and I suspect Florez’s comfort
zone would have been challenged to breaking point. This wasn’t a Werther
which had the luxury of languishing in melancholy like Kaufmann’s, or broke
the sound barrier like Domingo’s. This was a Werther which was sometimes
elegant, sometimes a little stressed – but rarely sounding like Massenet. 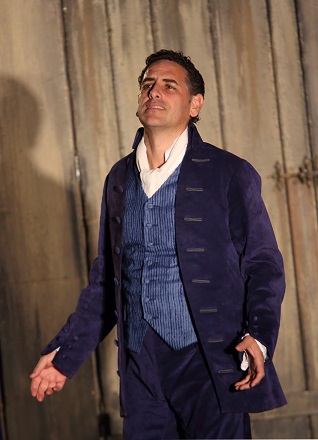 Isabel Leonard’s Charlotte, on the other hand, was impressive vocally, even
if she was a little frosty in her acting (such a common thread of this
production). There was something rather matronly about this Charlotte – a
mother figure who seemed to emote distance from her sister and the
children, a not entirely convincing bride of Albert (but not convincingly
in a loveless marriage either), and in many minds about her poet, but
rarely of guilt. Often, she felt like she was in completely the wrong
opera. But there’s nothing quite like a letter scene to bring out the best
in a singer-actress and Leonard was superlative. That middle-range mezzo,
which can appear so stifling for such large sections of this opera, was
used for all it was worth – and where Florez was inhibited in his acting,
Leonard used everything at her disposal to dominate the stage. This big
aria was a moment of revelation, the poise with which it was sung
uncommonly tight. Her voice does have considerable colour when she chooses
to use it against the orchestra – in Act III, her tones against both the
saxophone and harps were both careful and subtle. Her vibrato can sometimes
sound a little thick, but this is not a voice which sounds ungainly.

Heather Engebretson’s Sophie was perfectly cast. Of all the lead singers
she probably came closest to Massenet’s libretto: adolescent enough,
virginal, innocent and with a rock-solid soprano which stood in stark
relief to that of her sister, Charlotte. Jacques Imbrailo’s Albert is in
one sense miscast – every bit as attractive as the mystical poet, and with
a depth and range to his baritone you really wonder why Charlotte feels as
conflicted as she does. Jacquot’s vision of this opera, its grand gestures,
and the focus on the triangle of tangled love, does leave little room for
smaller roles to excel. A small gaggle of children, singing of Christmas,
are bookended at either end of the opera – cheerily at the beginning,
rather sinisterly at the end. 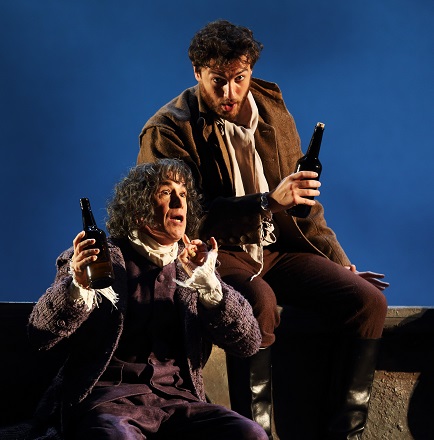 When this production works it’s hard to put a price on its merits. If one
can get through the sheer boredom of the first two acts – and everything
really suffers because of that – there is much to admire for the last hour
(though you have spend two hours to get there). Florez and Leonard are
compelling in Act III, and Werther’s death in Act IV is not without raw
power. Florez is not entirely miscast; his is clearly not a verismo Werther
but nor, I think, will it be to everyone’s taste.