This is a performance quite unlike any most have ever experienced. The evening begins not with an overture, but with two actors taking turns narrating three pages of exposition, stage directions, really, that mysteriously allude to two Russian teenagers who have run off together and barricaded themselves in a house in remote Pskov.

The next effect that follows is a projection of texts as they are being written, appearing on a screen filling the upstage. There are pitched bleeps and bloops as each word appears, that form an important, disquieting, even intrusive part of the musical tone scape. 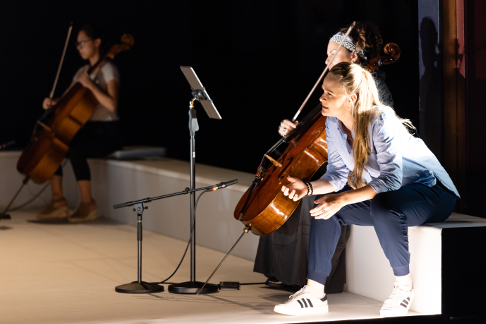 When the “orchestra” finally plays (magnificently) it is in the form of a quartet of cellists, placed at each of the four corners of the stage. Branson Yeast, Rose Bart, Jean Kim, and Jennie Lorenzo play sumptuously as an ensemble, while also proving to be first rate soloists in their own right. The large range of colors and effects they conjure up surely owes a good deal to Emily Senturia’s precise musical direction.

While the piece is about the two title characters, one of the most telling creative decisions is: We never meet them. They are the impetus for the composition, but not the performers in it. If all of this this sounds disquieting and disjointed, it is meant to be.

For the creative team have set out to question how responsibly we communicate in today’s world of technology. The source story that went viral on the Internet concerns the real life Denis and Katya, whose parents do not want them to be romantically entwined, and who rebelled, not unlike a latter day Romeo and Juliet. They ran away and hid in a cabin and began streaming live video of themselves.

(Spoiler Alert) Having fought violently with Katya’s family who came and confronted them, they barricaded themselves for three days. As they discovered guns in the cabin, and began using them against authorities who threatened them, they widened their streaming audience considerably. By the time Special Forces got engaged, the story had multiplied exponentially, had reached the networks, and was being seen by thousands around the world, sparking conspiracy theories and even fan sites. As the world watched with interest and alacrity, it did not end happily. 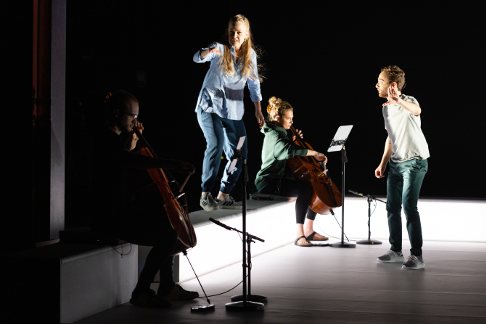 Mezzo Miller not only has a lovely and sincere stage presence, but also sports a ripe lyric mezzo that seems to know no bounds. She is called upon to impersonate The Journalist (a fact finder who struggles to remain objective), The Neighbor (who screams with hysterical abandon), and shares the dual roles of The Teacher and The Medic with her fellow cast member. Ms. Miller’s effortlessly fluid vocalizing and warmly appealing timbre are richly colored and dramatically compelling.

Having heard and admired baritone Hoffman on numerous occasions, it is a pleasure to report that he just keeps getting better and better. He displays total command and understanding of The Friend (who tries to understand the tragedy), The Teenager (who languishes in deep despair), and the afore-mentioned pairing with Ms. Miller to voice The Teacher and The Medic. His pointed, awesomely controlled singing is not only ravishingly potent in the dramatic outbursts but also stunning in its heartrending, limpid head voice effects.

The two singers succeed commendably at embodying these six iconic characters who re-tell the couple’s story from very different viewpoints, with text and music often intertwining to create an enriching, mystifying mosaic of sound and commentary. The pair could not have been bettered in their accomplishment.

The physical production is deceptively simple. As the audience enters the Suzanne Roberts Theatre, the open stage is seen edged by a low white bench that outlines stage right, upstage, and stage left. Instrumentalists sit on it spread out to the four corners, while actors sit, climb, and cavort on it as appropriate. The wings are open to the actual stage walls. A large projection screen fills the upstage.

Andrew Lieberman’s set design has more than a few tricks up its sleeve thanks to the same Mr. Lieberman’s complementary lighting design which dazzles and surprises. The neutral looking fence of seating is actually wired up with blinding interior white lights that startlingly heighten the tension at just the right times. His often austere area lighting melds into just the right warmth to underscore the anguish of the characters’ emotional states, and his use of isolated spots is as effective as his fearless use of darkness.

Pierre Martin has devised a miracle of a video design. I will not soon forget the seemingly endless loop of the train departing the station and traversing the countryside after a critical dramatic climax. The annoying appearance and sound of the texts appearing was another master stroke. Rob Kaplowitz has contributed a spot-on sound design that is subtly effective, and the amplification of singers and players is well controlled. Millie Hiibel’s well-coordinated neutral costumes were admirable in their understatement.

Librettist Ted Huffman is also the production’s director and he has brilliantly coaxed natural performances from both Ms. Miller and Mr. Hoffman. He moves the characters around the playing space with meaning, and uses every possible level and traffic pattern. The only set pieces are two folding chairs brought on and removed by the actors. All in all, Mr. Huffman has succeeded in pulling together all the disparate elements inherent in the characters’ reactions to this viral happenstance, and forces us to consider our own complicity in participating in such a tragedy, whether by commenting or simply by passively watching it unfold.

Mr. Venables’ score is a wholly unique aural palette. The deep, often mournful keening of the cello sound grounds the composition in a suitable Russian melancholy. But there are ample flashes of brilliant overtones, and agitated writing as well to complement the often declamatory, angular vocal lines. It was a pleasure to encounter a composer new to me, whose work was forward-looking, yet abundantly accessible. While the score displays parallel influences of other notable contemporary composers, it is decidedly sui generis.

That Denis & Katya defies expectations of what opera should be is one of its real strengths. It is also the source of a couple of questionable choices. The opening, spoken exposition goes on so long that I was wondering when they would ever sing. Later, the very long stillness after the penultimate climax was unnerving in its duration. However, I concede that after a bustling onslaught of images; continual shifts between character fragments; now-singing-now-talking; and projected texts that command our immediate attention like Pavlov’s dog; when there is finally nothing to distract us, in that deadly stillness, we are (gasp) just alone with our thoughts about all of this and our role in it all.

I wish there were music sooner in the evening. I wish that there were more emotional engagement, a bit more sentiment than matter-of-fact in the writing. In the end I greatly admired the result, when what I wanted is to be greatly moved by it. I think that potential is yet lurking just inside.

That said, with Denis & Katya, O19 has produced another first rate operatic experience, a highly effective production that should be seen by anyone who cares about the future of the art form.