This was a stunning performance of true festival quality, with a cast and creative team operating at the top of their game. Moreover, the intimate Perelman Theatre in the Kimmel Center is a perfect venue for Baroque opera. Every nuance lands, every arched eyebrow communicates, every whispered phrase shudders throughout the house.

Leading the cast, Amanda Forsythe proved a flawless Semele, her freely produced, floating soprano tinged with silver and at first weighted with an immensely appealing melancholy. As she becomes involved with Jupiter, her lyric delivery becomes imbued with more libidinous warmth and by the time she reaches the treacherous demands of Myself I Shall Adore, Ms. Forsythe is fearlessly, effortlessly hurling out roulades, acuti, and ornamentation at such a dizzying clip, your heart starts racing just to keep up. Hers is a towering achievement. 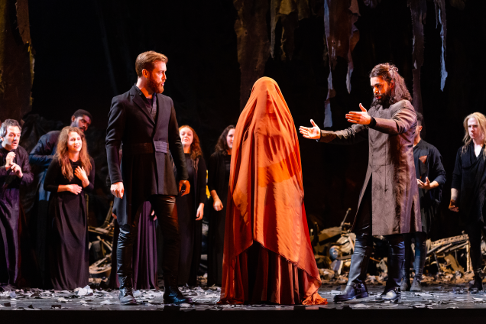 Matching her note for note in intensity and artistry is the sublime mezzo Daniela Mack, who has never been heard to better advantage as she doubled the disparate roles of Ino and Juno. As the former, she imbues her rich tone with a plangent world weariness that is melting, and heartrending in its ravishing effect. As the imperious Juno, Ms. Mack crackles with self-satisfied pomposity, her evenly produced vocalizing zinging out and dominating all within earshot. Her commanding, take-no-prisoners rendition of Iris, Hence Away was one of the evening’s several showstoppers, justifiably greeted with sustained roars of approval.

Erik Shrader’s substantial vocal gifts were also well displayed with his triumphant, strapping traversal of Jupiter. Having had ample chance to ravish us with some impossibly accurate and delightful rapid-fire melismas at full throttle, he plied his honeyed tenor and scaled it to nearly a filigree as he voiced a divinely sweet Where E’er You Walk. We scarced breathe, lest we break the sublime perfection of his music making.

Sarah Shafer was a sure-voiced Iris, displaying a wicked, uninhibited sense of comedy, all the while singing with secure freedom. Ms. Shafer’s creamy, gleaming soprano is a model of polished, poised perfection. She made a true star turn out of her rather licentious physicalization of the aria when she describes the pleasure palace that Jupiter has created for Semele. 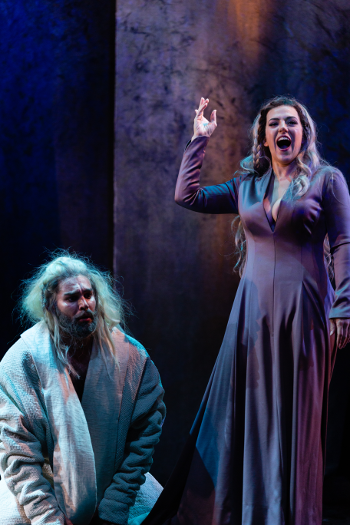 Alex Rosen as Somnus and Daniela
Mack as Juno

Alex Rosen does admirable double duty as Cadmus and Somnus. Mr. Rosen’s barrel-toned, massive bass made for a weighty, troubled Cadmus, and he spun out his arching phrases with luminous tone and impressive legato. As Somnus, this gifted singer imbues his assignment with a woozy sexiness, manly torso bared, lulled from sleep but now clearly ready to be on the prowl. This is a major vocal instrument and potent talent that is already impressive and promises much to come.

Tim Mead sported a secure, crystal clear countertenor in the small role of Athamas. His highly musical, incisive portrayal made us wish that Handel had given him more to sing, but even among this starry cast that had many meatier moments, Mr. Mead was memorably committed. This production includes an unscripted Principal Dancer, Lindsey Matheis, that is a shadow double of the hapless Ino.

Ms. Matheis was a key component of the concept’s success, as she hurled herself into anguished twisting and turns with total disregard for gravity. She was not alone in embodying churning emotions in movement, joined as she was by dance corps Justin Campbell, Sydney Donovan, Jesse Jones, and Daniel Mayo, who meticulously, tirelessly executed the inspired choreography by Gustavo Ramirez Sansano. While his devised movement recollected the work of Pina Bausch, Twyla Tharp, William Forsythe and others, Mr. Sansano provided his own vision, as the group ceaselessly writhed, rolled, tumbled, toted, and gesticulated to profound effect. 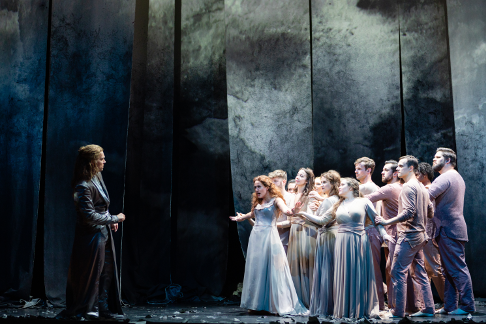 Semele (soprano Amanda Forsythe)
confronts Jupiter (tenor Alek Shrader) to
demand he appear to her in his immortal
form of thunder and lightning.

In the program notes, director James Darrah discussed the evolvement of movement in his interpretation of the piece. Indeed, the entire evening was not so much enacted as danced, with Elizabeth Braden’s excellent chorus joining in with awesome singing and uninhibited physicality. The precision of their execution was in fact one of the production’s true glories.

Mr. Darrah has fostered finely detailed characterizations, along with wholly understandable relationships, no small feat in a plot that, even after you have carefully read the synopsis twice, still makes you go “Huh?”. This gifted director leads us on an inevitable journey that illuminates and defines the composer’s intent. He has immense help from this creative team.

Emily Anne MacDonald and Cameron Jay Mock’s set and lighting design are a work of art from start to finish, morphing effortlessly as the story develops. As we enter the theatre we see a cloth sculpture enveloping the stage with ragged sheets of muted fabric hanging from the flies. The fire of Juno glows in a rugged cauldron. The ropes and rails are visible stage right. The whole impression is a bit chaotic, highly theatrical, with copious bits of paper strewn on the stage like so many dead (what?) leaves. Thanks to the cast’s tortured swirling on stage I would imagine the orchestra pit unintentionally inherited more than a few of these slips of paper as they flew about.

As we move to Jupiter’s realm, the cloths descend, spread, and smooth out to form a forest of hiding places that completely masks the stage. It is at this point that Adam Larsen’s atmospheric and fanciful projections really come into their own, brightening the gloom and adding innumerable whimsical touches. Sarah Schuessler’s fantastical costumes are indescribably varied and vivid. They aptly bridge the span of the two kingdoms and are so eye-popping and evocative that they greatly enhance the understanding of each and every character.

I hope that Philadelphia realizes the importance of this company and this annual event. I have been fortunate to have attended major festivals around the world and can state unequivocally that O19 can match any of them for quality, daring, originality, and artistic imagination. This nonpareil presentation of Semele is just one more example of Opera Philadelphia’s reliable standard of excellence.