The French have long known how to create librettos that tell simple stories in beautiful arias and duets. Even minor characters are given at least an arietta to show off their voices. Gounod offers his French choruses plenty of opportunity to harmoniously intervene with action or comment, and the French really do like the elegant movements of ballet.
Conductor Yves Abel, a splendid Rossini conductor, knows how to achieve the expanses of lyricism that suspend all sense of time. And this he did effect last night from the War Memorial pit for Charles Gounod.
Such was the case as well with the RomÈo of tenor Pene Pati who soared effortlessly through Gounod’s lovely lines with grace and elegance. He brought smooth, youthful energy to the role, and a long held, full voiced, beautifully produced high C that set a new benchmark for tenors who attempt such things. 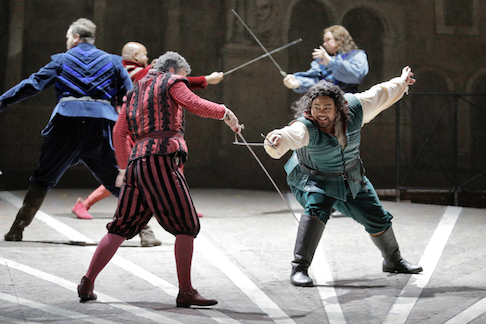 Daniel Montenegro as Tybalt, Pene Pati as RomÈo
Young opera star soprano Nadine Sierra as Juliette brought brilliance of tone to her showpiece arias of extravagantly intricate lines and demanding fioratura. She found lyricism that flowed effortlessly with Mr. Pati in the extended love duets that you wished would go on forever. There was genuine, apparent emotional involvement between the two lovers at their deaths, Gounod’s lovely music delicately touching our hearts.
Of note was Stephano’s (RomÈo’s page) aria splendidly sung by young mezzo Stephanie Lauricella who faced off with Adler Fellow SeokJong Baek as an energetic, fine voiced Gregorio to start the melÈe that provokes the deaths of Tybalt and Mercutio. Adding to the ideal of youth wished by Gounod was the Count Paris (Juliette’s intended) of baritone Hadleigh Adams.
The balance of the casting is inexplicable. Baritone Lucas Meachem played Mercutio as a blustery, look-at-me Figaro who belted out the Mab, Queen of Dreams. Tenor Daniel Montenegro sang a fine, small voiced Tybalt and might have fit into a production that attempted to integrate qualities of voice and of figure. Baritone Timothy Mix was Juliette’s twitchy father who had no sense of French phrasing. James Creswell as Friar Lawrence did not exude any apparent vocal or histrionic sympathy whatsoever for the young lovers in his rough voiced marriage ceremony, and bass-baritone Philip Skinner, maybe tired out from his well executed Dansker in Billy Budd the night before, was simply vocally spent. 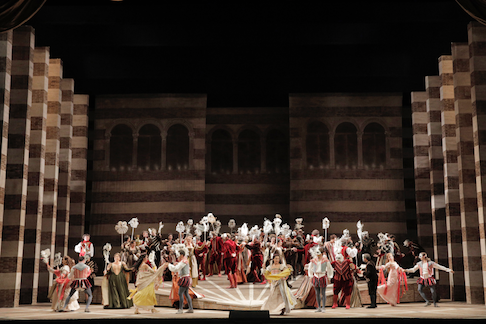 Act I
The budget production, such as it was, originated in 2012 at the Teatro Carlo Felice in Genoa (with Andrea Bocelli as Romeo), then traveled to Monaco for three performances in 2014 at the Grimaldi Forum (the sumptuous OpÈra Garnier was closed for renovation). The unattractive sets attempt to approximate some sense of medieval Verona, eschewing any sense of the opulence and elegance of Napoleon III’s Second Empire and its arts. The staging by the production’s original director Jean-Louis Grinda (general director of the OpÈra de Monte Carlo) was perfunctory.
Whatever happened to the splendid 2005 Ian Judge L.A. Opera RomÈo et Juliette production? Lacking an appropriate production to rent (surely San Francisco Opera knew the quality of this production) why did the Opera not opt for a white box, a few props and Rigoletto costumes (after all Mantua is not far from Verona) — the San Francisco Ballet scored a huge success with its famed, magnificent blank-stage Prokofiev Romeo and Juliet in 1977.
Michael Milenski