Sergei Prokofiev’s score crackles with colorful effects all evening long, and when it on occasion modulates to more lyric leanings, the tunes are marked by a pleasant melancholy. There are bursts of joyous abandon as well, like the Prince’s laughing fit, a cackling drag act, and the eventual wedding celebration. The main intent of the somewhat convoluted story is to entertain, and entertain it does. And how!
From the time we enter the auditorium, we can see a stage within a stage as designed by Justin Arienti, whose large white, ornate false proscenium is set well back from the apron, and is not masked by legs, so we see the actual walls and stage machinery “off-stage.” A pair of tall scaffolds flank the real proscenium right and left.
At the downbeat, boisterous gangs of men advocate the interests of Tragedy, Comedy, Lyric Drama and Farce. They are subsequently herded to populate the various levels of the downstage towers, and are told that there will be something for everyone in the show that they are about to witness, called: The Love for Three Oranges. Elizabeth Braden’s chorus was once again flawless in their accomplishment.
Director Alessandro Talevi keeps things percolating, and his unerring sense of restless, intricate group movement could qualify him as an air traffic controller at Philadelphia International. Mr. Talevi’s vision not only keeps the action moving, but also knowingly deploys an admirable sense of focus, so we are always directed to the important moment at hand. His admirable skill at crowd control is exceeded only by his ability to craft witty business between individual characters in well-realized chamber scenes. 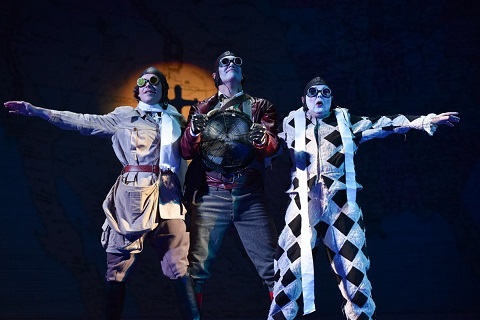 Just as designer Arient has a few tricks up his sleeve with scenic effects (shadow play, mechanized rat, etc.), Manuel Pedretti’s over-the-top costumes engage the eye, and define the diverse dramatic personalities. His cheeky interpretation of the Cook as a bloated chicken (no kidding) is inspired lunacy. The uber-talented David Zimmerman outdid himself with an inspired wig and make-up design that knew no bounds for fantasy and invention. Giuseppe CalabrÚ’s ever-morphing, malleable lighting design made sure that all of the other technical elements were beautifully showcased to maximum advantage, by shifting the mood and underscoring the dramatic intent with effortless skill.
It would be difficult to overpraise the incisive, magical reading that Corrado Rovaris elicited from the pit.The Maestro has helmed a shimmering, capricious reading of the composer’s ebullient score that enchants the ear, tickles the senses, and warms the soul. Whether playing as a tightly focused ensemble or featuring characterful solos, this accomplished band responded with a reading that is one part effervescence, one part meticulous stylistic realization, and 100 per cent magnificently reverberating accomplishment. 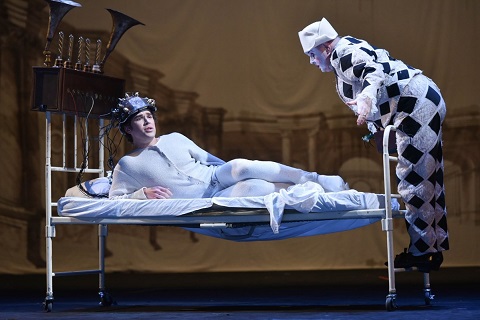 The large cast of soloists is evenly matched, and meticulously cast. As the melancholy Prince, the slender and youthful Jonathan Johnson strikes just the right balance of pouting charm and hang dog demeanor. Mr. Johnson’s freely produced, gleaming tenor fills the house with ease, thanks to his well-focused delivery. He makes the famous laughing scene irresistibly infectious, and he subsequently morphs into a character of determined maturity.
As his sidekick Truffaldino, Barry Banks’ pliable tenor soared fearlessly, effortlessly to encompass the heights demanded by this role’s tessitura. Mr. Banks’ loose-limbed presence animated his every scene, and we rather missed him when he was off stage. He also deftly voiced the gentle tragedy as he unwittingly causes the death of two princesses.
Scott Conner was a solid, sure-voiced King of Clubs, his impressively rolling bass possessed of just the right amount of bite to project the regal frustration that informs the character. Wendy Bryn Harmer was a powerful presence as a plush-voiced, potent Fata Morgana. Ms. Harmer admirably deployed her substantial, warmly tinged soprano with gleefully wicked coloring. 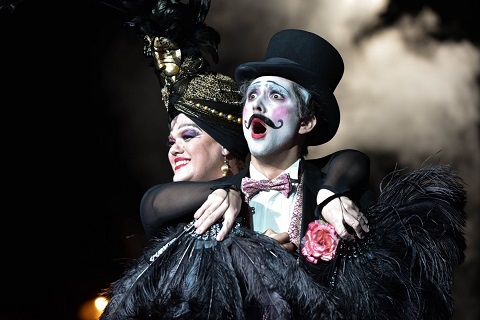 As the plotting duo Princess Clarissa and Leander, Allissa Anderson and Zachary Altman oozed mellifluous malintent. Ms. Anderson’s generous, throbbing mezzo made the most of her every utterance, while Mr. Altman’s oily, unctuous vocal delivery was informed by a handsome, commanding bass baritone of considerable stature.
Bass Zachary James’ towering physical presence is exceeded only by his towering talent on ample display in the featured role of The Cook. This outrageous drag act not only makes Mr. James a female, but as noted above, actually makes him a chicken. No chicken (s)he when it comes to hurling out musical phrases that throb with theatrical urgency and refulgent vocalizing. His coy girlish playfulness obtaining the ribbon he covets was alone worth the price of admission.
Tiffany Townsend was a ravishing vocal presence as the (surviving) Princess Ninetta. Ms. Townsend’s lustrous, creamy tone has spinto leanings, and her instrument sounds wondrously even and ravishing at all volumes and in all registers. This young talent is certainly a singer to watch as her star is sure to rise. Her sister Princesses Linetta and Nicoletta, were well-served by two assured mezzos, the former showcasing Katherine Pracht’s shining presentation and the latter wonderfully illuminated by Kendra Broom’s meaty, yet melting tone.
Even the smallest of cameos is cast from strength, a testament to the total achievement of the casting director. Brent Michael Smith’s strong delivery and admirable bass made the most of Chelio’s statements. Mezzo Amanda Lynn Bottoms’ poised, utterly secure phrases made a good case for Morgana’s treacherous accomplice Smeraldina. Will Liverman’s suave, elegant baritone is luxury casting for the King’s advisor Pantaloon. Ben Wager’s plucky bass enlivened the demon Farfarello; tenor Corey Don Bonar was the successful Master of Ceremonies; and bass Frank Mitchell richly intoned the pronouncements of the Herald.
Orange(s) is the new . . .hit. This winning mounting of The Love for Three Oranges should inspire other American companies to follow suit, especially those with the depth of Young Artist programs, and bring this inventive composition to a much wider audience. Bravi tutti to the wide-ranging participants that winningly brought Prokofiev’s unique creation to unforgettable life on the Academy stage.
James Sohre
The Love for Three Oranges:
Music – Sergei Prokofiev
Libretto – Sergei Prokofiev and Vera Janacopoulos
The King of Clubs: Scott Conner; The Prince: Jonathan Johnson; Truffaldino: Barry Banks; Fata Morgana: Wendy Bryn Harmer; Princess Clarissa: Alissa Anderson; Leander: Zachary Altman; Chelio: Brent Michael Smith; Ninetta: Tiffany Townsend; The Cook: Zachary James; Smeraldina: Amanda Lynn Bottoms; Pantaloon: Will Liverman; Linetta: Katherine Pracht; Nicoletta: Kendra Broom; Farfarello: Ben Wager; Herald: Frank Mitchell; Master of Ceremonies: Corey Don Bonar; Conductor: Corrado Rovaris; Director: Alessandro Talevi: Set Design: Justin Arienti; Costume Design: Manuel Pedretti; Lighting Design: Giuseppe CalabrÚ; Action Design: Ran Arthur Braun; Wig and Make-up Design: David Zimmerman; Chorus Master: Elizabeth Braden