From the outset, with the treacherous horn writing in Weber’s overture to Der Freisch¸tz, one got the impression that this was an RPO on
magnificent form. It wasn’t just the precision of the playing; it was the
tone and attention to dynamics as well. What was perhaps less convincing
was Albrecht’s view of the overture which seemed much more Wagnerian than
it is. The music is dark, downright sinister in places, but the ‘Wolf’s
Glen’ themes are a tad stormier than we got here. Albrecht conjured such
lugubrious playing from the strings there wasn’t too much room for the
music to glitter; those heavy-handed closing bars felt oddly misplaced.

There was nothing heavy-handed about Forest Murmurs from Siegfried
. Ravishingly played, almost as transparent in its textures as you might
hear in a performance of Siegfried Idyll, everything sounded
right. The divided writing for the strings was so carefully drawn out; but
so too was the music for woodwind, with birdcalls that quivered around the
fluttering wings of the strings. If Albrecht had been a touch reticent at
drawing the nature perspective into the overture of Der Freisch¸tz
, Forest Murmurs dazzled with rustic charm.

Franck’s Le chasseur maudit (‘The Accursed Huntsman’) bears more
than a few similarities to the Weber which began this concert: The hunting
theme, the supernatural, the sinister demons, even the music which edges
towards the sinister and gloomy in places. But this is also music which
seems overwhelmingly religious in parts; bells toll, and there is a hymnal
melody which accompanies sections of the score. Again, the playing was
exceptionally fine; passing exchanges between the strings and woodwind that
suggested the galloping of the hunt, thundering trombones which roared
through the orchestra like demons, beautiful string tremolos that
splintered and speckled, brass which refracted with a blazing brightness.

The second half was entirely devoted to Wagner’s Gˆtterd‰mmerung,
beginning with the interlude linking the Prologue to the first act, the
love duet, ‘Zu neun Taten, teurer Helde’, Siegfried’s Rhine Journey, Death
and Funeral March and, finally, Br¸nnhilde’s Immolation Scene. It’s often
struck me when listening to Wagner taken out of the opera how fragmented
and disjointed it sounds from the point of view of tension – that was
rarely the case here. Incomplete it may have been, but it felt entirely
convincing. Rarely has ‘Dawn’ opened in a concert performance with such a
vermillion glow of sunrise; it felt genuinely luminous, with cellos rising
through the orchestra as if awakening from a dark sky. Those magnificent
RPO horns – the leitmotif of Siegfried himself – were heroic and pristine. 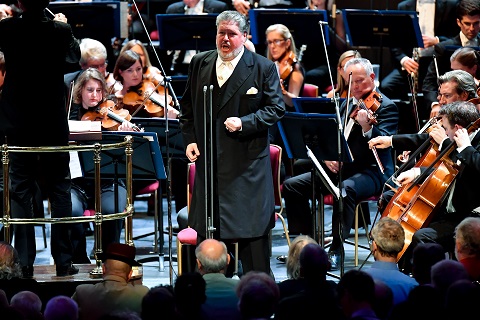 Christine Goerke’s very first line – ‘Zu neuen Taten’ – as she sings for
him to go forth on new ventures rather begged the question of role reversal
here. The voice is magnificently rich, so broad and dark in its tone, you
wondered if her Siegfried, Stephen Gould, could ever be the heroic
journeyman on his quest; the answer is he couldn’t. Likewise, if this is a
love that burns with fire – ‘Br¸nnhilde brennt dann ewig hellig dir en der
Brust’ – it never entirely felt one which was convincingly reciprocated. It
wasn’t that Goerke sang as if she was detached from Gould’s Siegfried,
rather that she was so daunting and fearsome you weren’t persuaded by it
all. So much of the libretto here seemed entirely descriptive of Goerke’s
assumption of Br¸nnhilde: fearless, powerful, stormy, raging – all emerging
with effortless, even terrifying, strength from a voice that easily strode
above an orchestra at full tilt. As the duet ends, the sheer chill factor
of both singers’ ‘Heil! Heil!’ served to emphasise the size of one voice
against the comparative meekness of the other.

Back to the orchestra again, and we got a beautifully phrased Rhine
Journey, a gloriously graphic picture of the flowing river, before Gould
gave an outstanding performance of Siegfried’s death scene. Where he had
seemed remote in the Love Duet, the intensity he brought to his death was
affecting. If you had wondered where the passion for his Br¸nnhilde might
have been in the duet’s ‘Heil, strahlende Liebe!’ the answer was given in
his inwardness and tenderness in the death scene’s ‘Ach, Dieses Auge’. The
link to such a towering and brutal Death and March was quite astonishing:
trenchant strings in unison like pallbearers, timpani that weren’t just
menacing, but with a gravity that felt more terrifying than usual. It was
enough to stiffen the sinews.

I’m not sure what happened with the transition between the end of March and
the beginning of the Immolation Scene, but conductor and orchestra briefly
drifted apart. Goerke doesn’t take this music as fiery as some sopranos; in
fact, it’s such a slow burn, the tension she brings to it is unmistakably
one that flickers, ignites and then blazes like an inferno. Some might find
her voice, which is more bronze than golden, to lack sufficient colour –
but this is all of a part with her embracing a Br¸nnhilde who would rather
take her tone from the braying, yet velvety, tubas in the orchestra, rather
than the steely horns. You hear betrayal in this voice, a desolation and
dolefulness which often isn’t apparent in a more penetrating voice. It left
an unforgettable impression, as did most of this concert. This was a Wagner
evening which felt entirely Teutonic – a not inconsiderable achievement.