For the libretto, Bottesini and Taddei used the text of a French opera by Luigi Cherubini based on the famous story from French orientalist and archaeologist Antoine Galland’s version of The Thousand and One Nights. Taddei translated it into Italian and shortened it considerably. Bottesini premiered the opera in 1871. The 2019 version directed by Foad Faridzadeh was an uproarious comedy set in the 1940s. His clever, wickedly amusing production had the Southwest Opera audience laughing out loud on numerous occasions.

What this opera needed was a star to carry the show, and Opera Southwest presented a perfect answer in the sensational bass-baritone, comic actor and all around showman, Ashraf Seweilam as AlÏ Bab‡. He celebrated his character’s riches by dancing nimbly across the stage but cowered in terror when threatened by thieves. His presence filled the stage as his resonant, bronzed tones flowed throughout the National Hispanic Cultural Center’s moderate-sized Journal Theater. 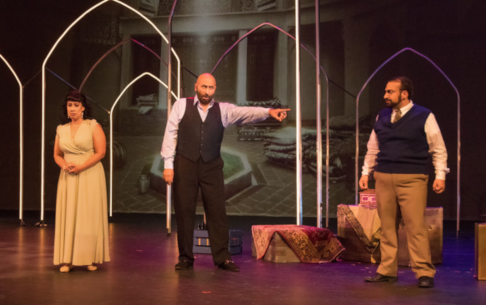 Monica Yunus as Delia, Ashraf Seweilam as AlÏ Bab‡, and Christopher Bozeka as her lover, Nadir.

Richard Hogles’ scenery consisted mainly of neon-lit arches crowned by a circle. The back of each scene was a projected wall, building, or cave designed by Media Vision that denoted the area in which the action took place. Daniel Chapman’s lighting created the appropriate ambiance for each setting. Carmella Lynn Lauer’s costumes, colors for female soloists but black and white for everyone else, established the time period as the forties.

Monica Yunus was a sweet, loving Delia who commanded attention as she sang with lustrous tones, an occasional trill, and some surprisingly hefty soprano sonorities. Her tenor was the lyrically gifted Christopher Bozeka whose smooth but warm and hefty legato immediately won the audience over to his side of the argument. They made a delightful young couple and they succeeded in making the audience want them to be together. Laurel Semerdjian was a conniving Morgiana who fascinated onlookers with her hijinks and comic timing. She sang with excellent diction and strong tones.

As the Head of Customs Aboul Hassan, Kevin Thompson had an imposing physique and a voice with a nasal tone that made him a fine villain. It was no wonder that Delia did not want to marry him. One of the most interesting voices in the show belonged to Darren Stokes, the bass-baritone who sang Orsocane (Beardog). While acting a “tough guy” part, he sang with rich, resonant dark tones. 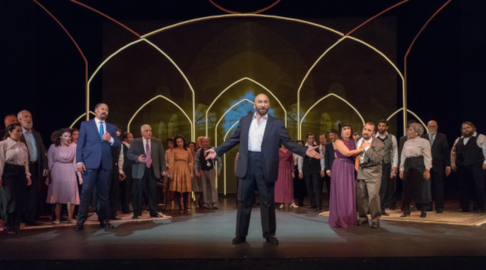 Kevin Thompson as Aboul Hassan and Ashraf Seweilam as AlÏ Bab‡ with chorus.

Three members of the 2019 Opera Southwest Young Artist Program: Matthew Soibelman as the Treasurer, Jonathan Walker-VanKuren as Orsocane’s Adjutant, and Kameron Ghanavati as AlÏ Bab‡’s Slave Faor, impressed me with both their vocal abilities and their stagecraft. Chorus Master Aaron Howe’ s women’s ensemble sang with light, mellifluous harmony as they moved across the stage. His men’s group portrayed believable cut-throat thieves and thugs while singing with strong masculine sounds.

Conductor Anthony Barrese put together the score for this production, the first in nearly a century. He gave a rousing, propulsive rendition of this rarely-heard work that allowed the singers enough space to breathe comfortably and interpret their characters, but never let the tension lag. He commanded a fifty-piece orchestra that gave listeners all the tunes and sonorities of this wonderful piece. The composer, who was an orchestra player and conductor, knew how to color the events and situations of this complicated story. AlÏ Bab‡ was a fabulous evening’s entertainment and I’m glad I traveled to Albuquerque to see it.