The production debuted Australia , and is described in the program as follows: “Inspired by the whimsical worlds of Charles Dickens and Tim Burton, director Lindy Hume sets the familiar classic in and around a Victorian emporium filled with period costumes, multi-level sets, and unexpected twists.”

Among the twists are: a scene set in a forced-perspective formal garden in summer when the rest of the show seems to be taking place in the dead of winter; a proscenium-filling wall of bookshelves equipped with a fifty-foot-long hidden bar; a number of primly-aproned and -capped nannies with long luxuriant beards and moustaches; and an origami shopfront stocked with collectible Victoriana.

Oh, the music? It was pretty good (as always depending where you’re sitting; in row T on Sunday evening all the singing seemed dry and distant, while from row P on Saturday afternoon the singers seemed to be in the same room as I. )

This is Gary Thor Wedow’s fifth round in the pit here, but his first conducting Rossini, who presents particular problems of pacing and ensemble, mostly in the composer’s pedal-to-the-metal act-ending accelerations. Here the accelerator seemed in need of a tune-up. Cenerentola was written in two weeks against a deadline, and more of its music feels a little off-the-rack, those careening finales above all.

It also is more dependent for success than most Rossini operas on a single number: the title character’s final (only) aria “Non più mesta” (no more sadness). It’s sort of the coloratura contralto’s “Casta diva”: a summation of what the voice type is technically and emotionally capable of at full stretch.

Neither of the gifted artists singing Angelina here is really a coloratura contralto, each has difficultly producing the frequent very low notes in the role, and each has a personal approach to dealing with the character’s octaves- spanning streams of ornamented melody.

Ginger Costa-Jackson bets the farm on “Non più mesta,” playing Angelina as a bit of a pill, whiny and sulky by turns, making her transformation to radiant butterfly in the last five minutes of the show absolutely stunning.

Her alternate, Wallis Giunta, takes the opposite tack, playing the character as a Disney princess for today, twinkly, spunky, good-humored; think Amy Adams in Enchanted and you’ve got it. Her way with “Non più mesta” is in the same vein; instead of ripping into the roulades she points them slyly, consciously, making us co-conspirators rooting for her, a damsel dancing through a vocal minefield.

Her approach to the role may be why I very much enjoyed the Saturday matinée and left McCaw Hall energized, while Friday’s performance left me feeling a bit pummeled by a staging so extravagantly out of scale with the material. (That and those seats.)

The tenor leads and capable supporting players were all personable. Michele Angelini (of the Brooklyn Angelinis) is the Rossini-tenor version of a Bari-hunk: he has a puckish smile, ease of movement, and technique so fast and fluent that it’s easy to believe the rumor that he has long been the go-to tenor to cover for Juan Diego Flórez. In a way his facility with florid music is a bit of a downside; he makes it seem too easy to be astonishing. But there’s no chemistry between him and Costa-Jackson’s morose Angelina.

Saturday’s Don Ramiro was Matthew Grills. His voice is coarser than Angelini’s, but almost as facile. Most important, he and Giunta “click” at first glance: they’re as sure to end up together as Hepburn and Tracy, Rock and Doris, which in romantic comedy is more important than high-notes any day. 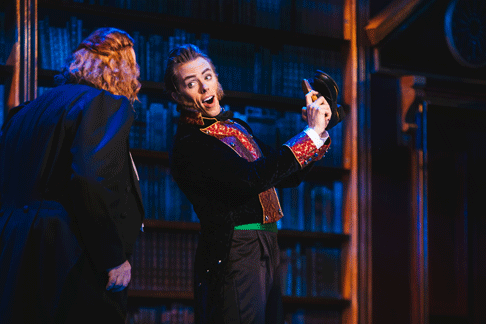 All the rest of the cast perform in both versions of the show except for the character of Dandini, Figaro to the Prince’s Almaviva. Here there’s little to compare between Friday’s Joo Won Kang and Saturday’s Jonathan Michie; Michie’s a born clown, Kang isn’t.

The bad-guy trio of Don Magnifico and his vain, grasping daughters (Peter Kàlmàn, Maya Costa-Jackson, Maya Gour) suffer from this staging’s (and most others) reduction of their characters to completely witless cartoons. Kàlmàn bills himself as a basso buffo, but he’s not a true bass, and his buffoonery is dryly cynical, not really comic.

I would love sometime to see a Cenerentola where Clorinda and Tisbe were permitted to exhibit one trace of human behavior amid the usual enforced gamboling, squalling, and preening, but I’m not expecting to. But Costa-Jackson and Gour have lovely voices; they deserve to be treated as more than wind-up toys.

The remaining character (and the singer performing him) stands apart from the general goofiness and superficiality of this staging. Bass Adam Lau has performed primarily secondary roles at Seattle Opera. But the role of Alcindoro, though small is central to Cenerentola. He’s described in the opera itself as the Prince’s tutor and as a “philosopher.” He also takes the place of the usual fairy-godmother. But he’s not, like her, just a deus-ex-machina. He’s the embodiment of the opera’s alternate title: “La bontà in trionfo”: the triumph of goodness, a gentle Sarastro, a sincere Don Alfonso.

Every time he appears, however clumsy the presentation, he suspends the whirligig motion around him for a few moments of calm, warmth, and good-will. You’d expect it to stop the action cold, and in a way it does; but it leaves us refreshed, better prepared to ride out the turbulent hi-jinx we know will soon be back.

And Lau, though he doesn’t have the resonant bass notes that ground the role, has something more important. A plot device in a greatcoat and top-hat, he’s the most human creature we encounter in the whole show.

A last word: the men’s chorus of Seattle Opera has gotten the reputation in recent stagings (Trovatore, Carmen, Rigoletto) of being the a musical version of The Gang Who Couldn’t Shoot Straight. With the help of choreographer and co-director Daniel Pelzig, they set a new standard forclassy movement and even do some deft dancing along the way. Let’s hear it for the boys.