In their treatment of this coming-of-age comedy, in which two young men trick their girlfriends into cheating on them with themselves in disguise, the directors emphasise the extreme youth of the couples. They even transform the sonorous Dutch National Opera Chorus into a pack of slouchy, surly teenagers. In this adolescent context, the couples’ overreactions to setbacks in their love life, including several suicide threats, make perfect sense.

Unfortunately, despite plenty of frantic stage business, the production is practically devoid of humour. Whenever the audience laughed it was at Da Ponte’s dialogue. The staging as a whole is illogical. Yes, even the improbable premise that two women can become intimate with each other’s boyfriends and not recognize them has to follow some kind of psychological, if not naturalistic, logic. When the sisters first meet their suitors, in reality their boyfriends pretending to be minor celebrities, Despina the waitress/chambermaid is treating them to a striptease in the hotel lobby. It’s anyone’s guess why Fiordiligi and Dorabella should be so outraged by this. After being rejected, the celebs start making out with each other, under the influence of the poison they pretend to have swallowed—an original idea that contributes nothing to their wearing down the women with their incessant wooing and pestering. Even worse are the unmusical choices, such as the silent scenes. There’s no excuse for stopping the music while characters get dressed when there’s yards of rhythmic, bouncy recitatives. Equally exasperating is the defacement of arias with unacceptable noise, such as Dorabella smashing a sideboardful of breakfast things during “Smanie implacabili”. 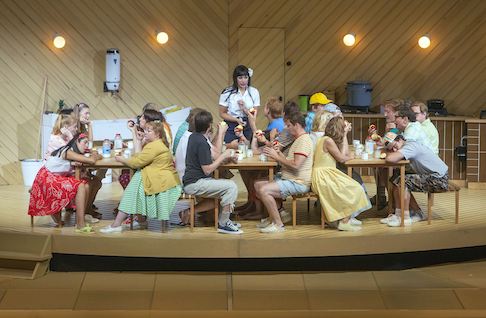 There are a couple of insightful, even witty, touches. Electric lights flicker when Despina, dressed as a turbaned doctor/alternative healer, weaves her hocus pocus. And Ferrando physically attacking Guglielmo when he finds out that Dorabella has been unfaithful is totally believable. However, such moments are sparse. Eighteenth-century Naples is traded for an unspecified seaside resort in the 1960s, but if this conjures up colourful vintage postcards, think again. It is true that the hotel guests wear a garish tangle of fifties and sixties fashions. But the only beachy thing about the unspeakably ugly set, a peanut butter-colored revolving platform partitioned into three hotel interiors, is the sprinkling of anaemic sand in front of it. There isn’t a hint of blue sky or water anywhere, not even through a window. Luckily, the performers supplied the much needed elan.

Ivor Bolton maintained a sprightly pace with deft and unfussy conducting. He expertly modulated the volume of the charmingly fluent Netherlands Chamber Orchestra to suit the soloists, creating pleasingly balanced ensembles. Another asset were the dry recitatives, during which the singers and continuo players kept up a stream of well-timed, sparkling repartee. Besides Bolton on the harpsichord, and a cello, the continuo included a guitar strummed by a superfluous but endearing beach hippie. Bolton and the soloists rescued the production from being a disappointing muddle. Thomas Oliemans made a fine role debut as a pipe-smoking, beard-stroking Don Alfonso, the puppetmaster behind the sadistic charade. I think he was supposed to be the hotel owner. His vocally secure cynic crackled with energy, occasionally revealing glimpses of the sadistic nature behind his amiable bon vivant act. Oliemans’s tangy timbre contrasted nicely with the other baritone in the cast, Davide Luciano, whose voice poured out like coffee liqueur, making him a particularly attractive Guglielmo. He and Angela Brower sang an exquisite “Il core vi dono”. Such a shame that this erotically charged duet was directed to exude the sensuality of a stock-taking session. 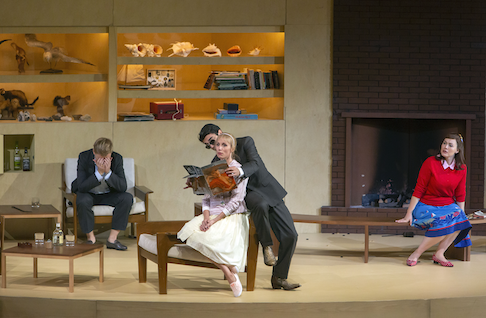 Brower was a delightful Dorabella, the flightier of the two sisters, her poised mezzo-soprano flawlessly produced. Soprano Annet Fritsch successfully captured Fiordiligi’s highly strung earnestness. The low notes lacked body, which is problematic in this role, and during her first big aria, “Come scoglio”, it sounded as if she was overtly managing every phrase. Given the manic staging, she probably was, having to negotiate the music’s Olympic leaps and runs while fussing aimlessly with books and glasses of water. In the second act she sang more organically, delivering a potent “Per pietà”, sadly marred by a case of persistent hiccups in the horn solos, and an arresting surrender duet with her Ferrando, Sebastian Kohlhepp. Kohlhepp, who commands a robust, darkish tenor with slightly clipped Germanic vowels, sounded slightly pressed in “Un’aura amorosa”, but then went on from strength to strength. This production retains the frequently cut taxing aria “Ah, lo veggio”. Kohlhepp sang it with supreme control and conviction. Last but not least, Sophia Burgos as the free-spirited Despina left nothing to be desired. Her diction was clear, her musical instincts unerring, and her vocal acting as natural as her feline movements, even in her parodic disguises as the doctor and the notary. The cast served Mozart and Da Ponte well, even if the production team didn’t.