Handel’s librettist was the German poet Barthold Heinrich Brockes
(1680-1747), whom the composer had met during their student days in Halle.
Brockes’ text combines elements of the Passion story selected from all four
gospels, but while the sacred narrative is well-known, the startlingly
rich, raw imagery of the text imbues the drama with an unusually strong
human dimension. On Good Friday 1719, when the citizens of Hamburg had the
opportunity to hear four settings of Brockes’ Passion text – by Richard
Kaiser (1712), Georg Philipp Telemann (1716), Handel (?1716) and Johann
Mattheson (1718) – at an event organised by the latter (then director of
music at the city’s cathedral), the emotive immediacy of Handel’s Brockes-Passion must have been striking. (See my review of the

for further information about the Brockes-Passion’s libretto and
the work’s historical context.)

The AAM’s presentation of Handel’s Brockes-Passion is handsome. The three discs are enfolded within a deluxe sleeve-box decorated with
original artwork by Emma Safe, a portrait of Handel and a manuscript
facsimile. They are accompanied by a sumptuous 220-page hardback mini-book
containing the libretto (in the form of the original MS text, the sung
German text and an English translation) and numerous scholarly articles.
The latter are illustrated by performance and recording photographs;
manuscript facsimiles; portraits and engravings drawn from significant
archival collections at Handel House Museum London, Handel House Halle and
the Gerald Coke Handel Foundation; and reproductions of Emma Safe’s mixed
media artwork, each of which (Sands to Shore, Thirst Black Maw, Break My Heart, Performance Study) was created as a live
response to particular arias during the AAM’s 2019 performance at Barbican
Hall.

The extent and diversity of the scholarship and contextual documentation is
impressive. Included too are images, transcriptions and translations from
the contemporary journal Hamburg Relations–Courier (as
published in George Frideric Handel: Collected Documents, vols. 1
and 2, the editorial team of which is led by esteemed Handel scholar Donald
Burrows). Thus one can read a detail from a performance announcement for
the Brockes-Passion, 21 March 1730: ‘Next Thursday being the 23
March [12 March os], the very famous Passion Oratorio written by His Honour
Herr Brockes and composed by Herr Hendel, will be performed in the Drill
House here before the most excellent and honourable Council, to begin at
half past 4 precisely.’ 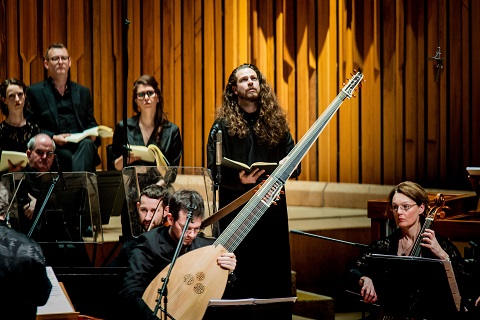 Alongside such scholarly exploration and assessment, a wealth of insightful
personal responses is also offered. It was the discovery of a box-set
recording of the Brockes-Passion in a Cambridge record shop during
his student days by the AAM’s Music Director, Richard Egarr, that
ultimately led, more than 30 years later, to this recording, and Egarr
argues persuasively that, alongside masterpieces such as Messiah
(1741) and La Resurrezione (1708), the Brockes-Passion is
the crowning achievement of Handel’s response to Holy Week, because the
composer was setting a text in his own native tongue, responding to the
content and nature of the text as a German.

Editor and principal oboist Leo Duarte writes of the process of
discriminating between the different manuscript sources of the Brockes-Passion – including recent discoveries, such as a
manuscript started by Handel’s principal copyist J.C. Smith and a copy
purportedly belonging to Haydn, and most interesting of all, one created
for Handel’s friend Elizabeth Legh, a notable collector of his manuscripts
from 1715 until her death in 1734. The AAM’s Chief Executive Alexander Van
Ingen explains how decisions were made about performing forces while Dr
Ruth Smith offers an eloquent and comprehensive account of the text,
Handel’s setting and the factors which may have motivated the composer to
set Brockes’ words.

The wider context is not neglected. Professor Joachim Whaley and Dr Bettina
Varwig provide interesting articles which illuminate how the Brockes-Passion was a product both of ‘the remarkable political,
religious and artistic culture of the Holy Roman Empire’, and of Hamburg in
1719, which offered visitors a ‘thriving public concert culture that was,
at this time, still rather unusual even in the larger urban centres across
Europe’. Handel arrived in London not long before it is believed he
composed the Brockes-Passion and excerpts from Jane Glover’s Handel in London: The Making of a Genius inform us about Handel’s
early years in the city.

A performer’s view is presented by Joseph Crouch, the AAM’s co-principal
cellist, who considers the way an instrumentalist may respond to the text:
‘It is not easy for the cellist’s bow to delineate between the hope for
revenge and the hope for salvation!’ writes Crouch, explaining that it is
not so much semantics but phonetics to which an instrumentalist responds:
‘Singers work for years on clarity of diction, whether or not they are
singing in their native tongue … playing parlante does not mean
simply playing non-legato, but rather it involves creating musical phrases
made up of words, syllables, vowels and consonants. The baroque string
player’s right hand corresponds to the lips, teeth and tongue of the
singer.’ It’s fascinating and thought-provoking reading.

On a lighter note, food historian and period cook Seren Charrington-Hollins
uses the ‘virtues and faults of Handel’s love affair with food’ as a
springboard for wider reflections on 18th-century fare, table
manners, street food, including recipe excerpts for delights such as ‘Solid
Syllabub’ and ‘Artichoke Bottoms’. 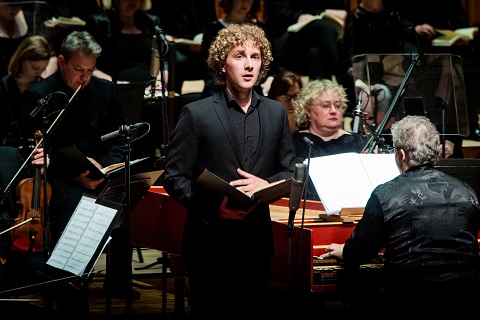 In my 2019 review, I pondered whether Brockes might be termed the
‘Metastasio of Hamburg’, so numerous were settings of his text. Here, a
full list of known and likely performances of musical settings during the
years 1712-50 is provided – there are approximately 60, presenting works by
10 composers from Keiser to J.S. Bach, from Mattheson to Telemann – along
with a list of recordings and broadcasts of Handel’s and others’ settings
of Brockes’ text. Finally, for the first time the text of Charles Jennens’
partial English translation is given in the Appendices – alongside
alternatives, variants and additional items in the sources – and the music
of both is presented on CD3.

The AAM have not just presented the listener with ‘all one needs to know’
about the Brockes-Passion but have produced a comprehensive and
engaging accompaniment to their performance – one which represents the best
in scholarly, interdisciplinary, performance-related research.

So, what of the performance itself? The vocal and dramatic immediacy which
was so notable in the Barbican Hall is reproduced on the recording, and is
in evidence from the first bars of the Symphonia in which punchy lower
strings and continuo provide rhythmic propulsion for the fleet violin runs
and sweet oboe contributions, before a harmonic turn introduces
contrapuntal conversations which are both energised and melodically
engaging. Here and throughout, Egarr, while always pushing forward,
maintains transparency and clarity, and the engineers have ensured that the
sound is bright and equally well-balanced in the choruses and arias.
Handel’s melodic invention and ear for instrumental colour in the arias’
frequent instrumental obbligatos have a powerful emotive effect.

Robert Murray’s Evangelist and Cody Quattlebaum’s Jesus particularly
benefit from the immediacy of the recorded sound. In the Barbican Hall,
placed behind the instrumentalists and in front of the AAM Chorus, they had
to work hard to communicate with directness and to sustain the narrative of
the recitatives. Here we can more fully enjoy the contrast between Murray’s
poised, shapely tenor – tinged, appropriately, with urgency at times – and
Quattlebaum’s beautifully tender bass: in particular, the pathos of Jesus’
recitatives seems stronger, as the organ complements rather than obscures
the voice. Similarly, during the sequence in which Jesus foretells of
Peter’s denial the voices feel more integrated, the drama seems more
compelling. Quattlebaum’s plump, dark tone and agility establish the
authority of Jesus’ declaration that he will ‘smite the shepherd and the
whole flock shall shatter’, while, as Peter, Gwilym Bowen’s responses are
insistent yet instilled with a beautiful pathos and sincerity, particularly
as the latter’s tenor falls in register. 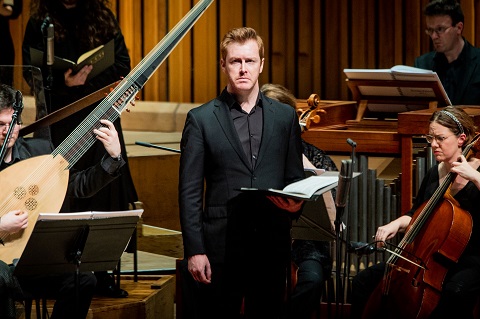 There are too many ‘highlights’ to term them such. Tension in the pressing
string and organ rhythms which support Jesus’ appeal to his Father are
matched by Quattlebaum’s intensity as the vocal line almost trembles with
anguish, though there is a softening, ever so slight, as Jesus’ resigns
himself to the suffering which is his Lord’s will and must be fulfilled.

Elizabeth Watts’ response, as the Daughter of Zion, to the physicality of
Jesus’ crucifixion seems almost too calm and pure to articulate her vision
of the Saviour’s fear – ‘see how his tongue and lips thirst, hear his
whimpering, sighing, longing’ – but her elegant decoration of the da capo
repeat, and the delicate string gestures which stroke her vocal line,
intimate the passion which breaks free in the soaring concluding image, as
‘Jesus’ body dissolves in blood’. Her riposte to the Soldier who strikes
Jesus fairly bristles with a fury made more searing by Handel’s unexpected
harmonic stings, but when the Daughter of Zion reflects on the ‘piteous
rubies, formed from clotted blood on Jesus’ brow!’, Watts’ soprano has a
sheen that seems to reflect the glowing beauty of the figurative jewels.
Her admonishments to the ‘brazen sinners’ have a focus and candour that it
would be hard to deny.

Bowen’s tenor burns with self-loathing, the text fiercely declaimed, the
rapid divisions clear, when Peter calls on ‘poison and fire, lightning and
flood’ to ‘engulf the false betrayer’, as the perfectly tuned ensemble of
unison strings race and roar; subsequently, the sincerity of his simple
plea to share Jesus’ suffering and fate is strengthened by the eloquence of
the continuo cello’s melodic echoes and elaborations. If the angularity and
fierceness of the accompaniment to Peter’s self-lacerating outburst does
not make one squirm with shame, then Bowen’s piercing delivery of the text
and Duarte’s mocking oboe obbligato surely will. 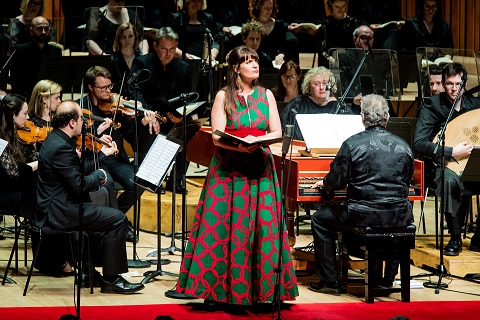 The strings’ dotted rhythms fairly seem to tear Judas’ flesh and crush his
bones to avenge his deed, as Tim Mead’s rich countertenor swells with
almost ecstatic strength to beg that his ‘damned soul’ may suffer ‘in
eternal torment’. As a Faithful Soul, Ruby Hughes’ soprano sails with
angelic sweetness as if its purity embodies the love that leaps from Jesus’
blood as the soldiers thrash him, while Nicky Spence’s beautifully shaped
comments on Jesus’ apparent gratitude to his Father for ‘bestowing on him
the cross he long desired’ convey awe and fear. Hughes is joined by Rachael
Lloyd and Morgan Pearse for one of the score’s few ensembles: a sonorous
trio of reassurance -following Jesus’ cry, ‘It is accomplished’ – that the
power of Death and Hell is vanquished and mankind will be redeemed.

The AAM Chorus are in fine voice as the disciples, soldiers and crowd of
Jews: their cries to free Barabbas are flung forth with frightening fervour
and conviction. But, as so often in Passion settings, it is the chorales
that are often most affecting. When the Christian Church hunger for God’s
benevolence and nourishment, the vitality and warmth of the voices,
complemented by buoyant violins, suggests that the very anticipation of mortal union with God provides sufficient joy and
consolation. Their later appeal to God for redemption, despite their sins,
is straightforward and honest, and if they are later mortified by those
sins, then in the closing chorale the glowing ensemble sound confirms that
they are sustained by Jesus’ shed blood and assured of eternal life in
death.

In the Barbican Hall, Egarr was not always able to maintain dramatic
momentum, particularly in the latter stages of the Brockes-Passion
, during the long series of exchanges between the Daughter of Zion and the
Faithful Souls. In one’s armchair, this is less of a problem: one can
simply enjoy the musical richness and the expressive impact of the
performance.

The Brockes-Passion – both Brockes’ text and Handel’s setting of
it – may be rooted in its immediate historical context, but the AAM’s
recording offers a Passion for all times and all places.