It was off to a good start with its show curtain, a huge architectural drawing detail of a corinthian capital aside a partial faÁade, slowly morphing, videographically, into a fully realized faÁade elevation (drawing) of the aristocratic home we were about to enter. This occurred in precise, riveting synchrony to Mozart’s well-conducted overture. It was a visual distraction, very finely and thoroughly done, making apparent that the evening was not to be about Mozart’s hallowed score.
It was about the house we entered, essentially the world and its order (the droit du seigneur) that had been constructed in front of our eyes. And its noisy inhabitants, lots of them, in the act of moving in. While the house was slowly making itself ready for its entering occupants their worlds began falling apart. Finally, very late in the evening, we arrived at the perfectly finished garden where everyone, absolutely everyone’s world did indeed fall apart. Including Mozart’s. 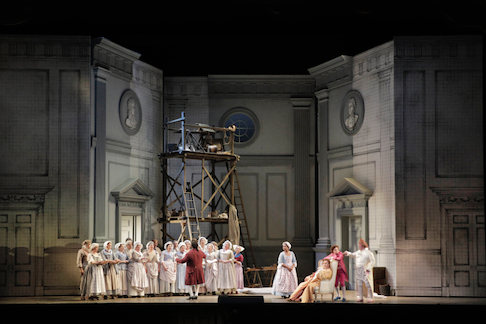 Act I, with construction scaffolding
The inhabitants seemed fairly random. A Hungarian Count, a South African Susanna, an Italian Cherubino, a Countess coming via Houston (where else?). Bartolo, Marcellina and Basilio were summoned from the Opera’s warehoused treasury of singers. And there was Figaro, baritone Michael Samuel, who held it all together with musical aplomb, and a dignity that was sorely missing from everyone else. That was director Cavanagh’s point.
It was an avoidance of the perfection that we anticipate in a Mozart DaPonte opera production, a world we cherish for its rarified, distilled emotion and high moral and musical concept. Instead it was an imagined, rowdy world of Beaumarchais’ pre-revolutionary France and its hero Figaro. And a catch-all of opera casting.
Starting with Count Almaviva, sung by Budapest Opera’s Levente Molnar who chased a fly around the room in his famed “Hai gia vinta la causa.” Mr. Molnar, a fine singer who well intoned the showpiece, is an accomplished dead pan comedian. Light on his feet, exposed, he collapsed in a heap onto the floor to beg the Countess’ forgiveness. The Countess, sung by soprano Nicole Heaston, was simply overwhelmed by it all. Lost in the impressive, expansive confines of her new home, in beautiful voice she gave us a lonely “Dove sono i bei momenti” threatening to fall below pitch in her depression, aided by the conductor who provided unsustainable tempos.
Susanna, sung by soprano Jeanine de Bique of small voice and great big presence, blatantly teased the Count and Figaro and everyone else, and in general displayed a lot of attitude about most everything. She was at her wit’s end in the third and fourth acts, coping, it seemed, as best she could, vocally and emotionally. Figaro, baritone Samuel, was the moral conscience of Beaumarchais’ revolutionary world, a conspirator with Mozart in an intense emotional world, and the one character who grounded director Cavanagh’s raucous household through the innately solid musical and vocal confidence he displayed in his first act aria “Se vuol ballare signor contino” and his last act aria “Aprite un po’ quegli occhi.”
Cherubino, sung by Serena Malfi, was the star turn of the casting, her Cherubino is present on the world’s major stages. Here very unlike the sweet energy and innocence of Federica von Stade’s renowned Cherubino, Mlle. Malfi’s Cherubino was a true boy brat, persistently annoying throughout the opera, akin to the fly Almaviva chased around his study. With her famed “Non so piu cosa son” Mlle. Malfi made it clear she could do just about anything with her character, including coping with some weird tempos imposed by the conductor.
Of utter perfection were the Marcellina of Catherine Cook and the Basilio of Greg Fedderly, well known in these roles in previous San Francisco Opera Nozze incarnations. But here their delightful, heavy caricatures of Mozart’s subversive characters were a bit out of place in the grittiness of the production, with Mr. Fedderly’s costume surely borrowed from a Cunning Little Vixen production. Bass James Creswell was over-parted as Bartolo, this character needing a warmth and strength of personality that Mr. Creswell did not find.
A big player in Mr. Cavanagh’s destruction of our expectations was Hungarian conductor Henrik N·n·si, last heard in San Francisco conducting the ninety-some players of the 2017 Elektra. Mo. Nanasi is not an early music conductor, nor is the San Francisco Opera Orchestra a period instrument ensemble, attributes that might have played more appropriately with this irreverent take on the Mozart masterpiece. The 45 players of the Opera orchestra created a very present, appealing sound that challenged our sense of balance with the generally smaller-voiced cast, voices appropriate to more intimate European Italian style theaters. Well, except for the voice of Adler Fellow Natalie Image’s Barbarina that filled the 3200 seat War Memorial to its brim.
But the maestro did often fall into a wonderful flowing lyricism that promised and delivered great musical reward for the Mozart heroines of the evening. Unfortunately Mo. Nanasi acceded to the temptation to drag out this wonderful lyrical atmosphere with excessive retardandos in the final moments of the arias.
It all went well until the fourth act when in our exhaustion (there were intermissions after both Act 1 and II, usually united) we were ready for some Mozartian emotional and musical idealism that could bring Beaumarchais’ troubled characters as envisioned by director Cavanagh some peace. This was not to be. Both stage director and conductor had shot their wads by that point, and glibly wrapped up this monument to 18th century Enlightenment as quickly and efficiently as they could.
With set designer Erhard Rom director Cavanagh created a setting that was fully 18th century in image and fully 21st century in technique with the set participating in the action — a three section wall with a door fell from time to time, all or in part, to isolate a singer or a scene on the stage apron creating a new, stronger focus on the moment. Lighting designer Jane Cox used modified versions of avant garde lighting cliches to amusing effect. 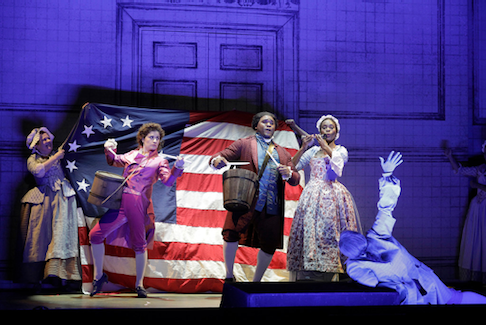 Cherubino marching off to America, Figaro on drums, Susanna on fife
Director Cavanagh exposed great wit non-stop throughout the evening, with inspired ideas like sending Cherubino off to join French general Lafayette in America, with piquant moments like the prompter reaching out of his box to fetch the jar the Count had used to briefly imprison the fly, and with weirdness like Curzio, sung by tenor Brenton Ryan, insanely writhing in the doorways during the wedding minuet. The plethora of choreographed gags sometimes flowed impeccably, and sometimes did not.
All in all it a was an auspicious debut for the Michael Cavanagh Mozart DaPonte trilogy.
Michael Milenski

All photos by Cory Weaver courtesy of the San Francisco Opera.