If Strindberg and Alwyn do differ slightly in how they tackle the class
issue in Miss Julie, it’s probably down to the almost century-old
difference between when both the play and opera were written. Miss Julie’s
aristocratic values, and her lack of modernity, are widely derided by
Strindberg just as Jean is seen by him as more fit to thrive because he is
breaking through those tight-knit social barriers. It seems almost
inevitable to Strindberg that Miss Julie will fail, and Jean will triumph
as the old order is turned upside down. Alwyn has almost seventy years of
social change to draw upon; for Alwyn, Miss Julie’s very lack of modernity
and her inescapable bonds to her social class become much more tragic, just
as Jean’s new-found status is motive enough for cruelty. 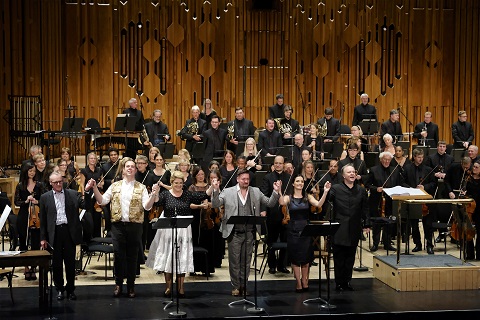 All of this, of course, makes for either good theatre or good opera.
Strindberg’s play is certainly notable for being very compact; it’s
arguable that Alwyn’s opera isn’t always. The addition of a fourth
character, Ulrik, only alluded to in the play, substituted in full for the
chorus of villagers by the composer, adds some heft to the narrative of
Alwyn’s opera which doesn’t always work in its favour. As a device, he
seems rather Falstaffian – though lacks almost everything Falstaff does to
warrant our attention. In an opera that is already saturated with allusions
to drink – and in Kenneth Richardson’s concert production almost literally
so, with bottles of beer, wine and potion as copious as the dramatis
personae itself – Ulrik seemed like overkill. Strindberg had alluded to the
invisible count by his boots and gloves – Alwyn keeps these symbols of
oppression in his libretto but doubles it up by giving him a motif – a
bell-like triad – within the orchestra as well. I often wondered if Ulrik
might have been better served this way, if at all.

If there are failing in Alwyn’s handling of the plot, the music he wrote
for this opera is often of a very high order. He was of the view that some
of what he composed was radically new – the use of anticipation in the
music, for example, by giving rhythm to a significant phrase before it is sung; this sometimes works in the opposite direction
as well. His implication that motifs were somehow revolutionary disregards
almost all of Wagner, however. But the score is extraordinarily lush,
unsurprisingly cinematic in its scope and detail given that Alwyn is
probably best known for his film scores. The orchestration is ravishing in
its precision – you could hear the harp every time, for example, and I
suspect what Alwyn was doing in the orchestra was mirroring the lucidity
and clarity of human speech which is also completely crystal clear.

But you sometimes wonder when listening to Alwyn’s Miss Julie just
how short on inspiration he was without the music so many composers had
written before him. There’s Stravinsky’s Firebird (the opening of
Act II), a shocking reference to Puccini immediately followed by a direct
quotation from the Trio of Der Rosenkavalier (Act II’s ‘The Scum
on the Surface of Water’) – and it goes on, Salome, Tristan, Troilus and Cressida, the film music of Herrmann
(Hangover Square, and the tenebrous ‘Concerto Macabre’) and hints
of Ravel and Szymanowski. There are waltzes (of the Richard Strauss kind)
but they are never fulfilled – their glory is that they collapse,
incomplete. Despite all this wash of theft it’s still impressive and
completely absorbing to hear. 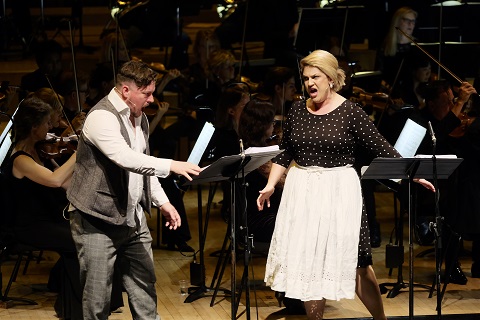 Sakari Oramo didn’t so much conduct this music, he caressed it, coaxed it
out of a BBC Symphony Orchestra on magnificent form. You sometimes wished
the orchestra had been arranged differently – divided violins, cellos
seated in the middle and basses along the top to give a slightly more
balanced depth to the sound. That richness of the lower strings seemed just
a little out of kilter, something which might well addressed in the
recording which is imminently to be done.

The singing was also of the highest quality. Benedict Nelson (a very short
notice replacement for Duncan Rock) as Jean was so dominant he was in
danger of overshadowing everyone else. The role is a gift for a singer
capable of expressing the breadth of this character’s journey – from a
subtle, if Don Juan like charm, to a brutal callousness and cruelty. In one
sense, Nelson’s performance lived the text – even in this minimalist
staging he was magnetic enough to throw off the advances of Kristin, the
plain cook with whom he is romantically entangled, to embrace, like a
chameleon the next moment, the forbidden love of Miss Julie in an entirely
erotic way. Nelson’s high, slightly heroic, baritone (impeccably phrased)
was persuasive enough to suggest his Straussian hubris and his new-found
virility. Nelson’s gritty performance was quite some way from being even
close to Strindberg’s idea of a man with dreams of cosmopolitanism –
rather, this was dripping in anger and an almost off-hand suggestion Miss
Julie commit suicide. It chilled to the bone.

Anna Patalong’s Miss Julie relied in part on her ability to navigate the
spread in intervals that Alwyn wrote for the part – that she coped with
superbly. I was less certain she managed a clarity of diction, sometimes
sacrificing that for an aristocratic tone. But her voice had a glorious
tonal middle which hugged around the strings, or the solo violin which so
often accompanied her singing. This, too, was a performance of considerable
subtlety. Perhaps helped by the fact she is married to Nelson, the sexual
chemistry between the two was highly charged and her singing in the
‘Midsummer Night’ aria had every suggestion of fecundity and freedom to it.
If her seduction of Jean seemed particularly real, so did her suffering as
she faces the choice of suicide – though Jean’s massacre of her finch (in
Strindberg) or her dog (in Alwyn), and Miss Julie’s hysterics because of
it, has always struck me as a ludicrous plot addition.

Rosie Aldridge’s Kristen didn’t really deviate from being an entirely
memorable nag. Jean mentions that she is often enough, and Aldridge was
both witty in her acting and dour enough in her phrasing to bring the cook
to life. Samuel Sakker’s Ulrik, bawdy, devious, teasing and with a bright
tenor, rounded off a cast of singers which really didn’t have a single weak
link.

Given it has been over twenty years since this opera was last heard, and
forty since it was first recorded, this BBC concert was, in a sense,
overdue. This was an exceptionally fine performance, even it doesn’t quite
stand as a masterpiece of British opera in ways that Walton’s Troilus and Cressida, Tippett’s Midsummer Marriage, or
many of Britten’s operas do. The Philharmonia recording, made in 1977, is
magnificent – I suspect the forthcoming BBCSO one, based on this concert
performance, will fully equal it.