Haydn’s opera mixes seria and buffa elements, and while
it delights in ridiculing classical pomp and presumption – the Act 2 finale
openly parodies the coro di Furie from Gluck’s Orfeo ed Euridice – there are also moments of genuine pathos and
musical sincerity. First performed at Eszterh·za on 25th
February 1781, La fedelt‡ premiata celebrated the reopening of the
court theatre after a fire. It was much admired: revised in 1782, it went
on to receive 36 performances in four seasons, second only in popularity to
Haydn’s dramma eroico, Armida; in 1784 a performance was
given, in German translation, by Schikaneder’s troupe in Vienna. Thereafter
it fell into obscurity, though the overture remained familiar – in its
guise as the finale of his Symphony No.73, La Chasse – and one
scene (Celia’s ‘Ah come il core’) was published as a cantata for soprano
and orchestra.

The dismantled and dispersed manuscript was eventually ‘rediscovered’ in
Turin and in 1968 a complete score was published for the first time by
Henle-Verlag. The first modern performance took place at the Holland
Festival in 1970, the first UK staged performance occurred as part of the
Camden Festival in April 1971, and since then both Glyndebourne (1979) and
Garsington (1995) have presented productions, as have some of London’s
conservatoires.

If La fedelt‡ premiata has, like the dozen so operas by Haydn that
have survived, struggled to find a foothold in the opera house, then it
can’t be denied that Haydn did give his audience at Eszterh·za much
eventful extravagance and spectacle. Sea-monsters and satyrs are on the
rampage. A wild boar separates the heroes from the hysterics, sending the
philandering ‘Count’ Perrucchetto – whose name literally means ‘wig-maker’
– clambering up a tree-cum-stepladder, while the noble Fileno shows his
mettle by slaying the beast. 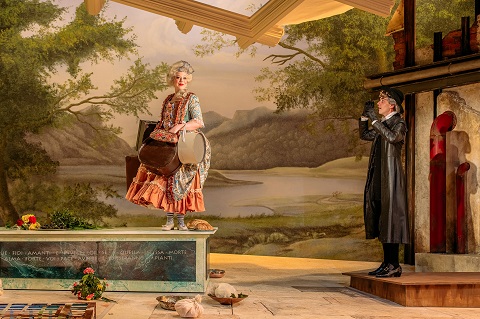 There’s a colourful cast of characters too, including Melibeo, the crooked
High Priest (here looking like the Witch-Finder General in his menacing
leather coat and gloves, though his spy-goggles were designed to wheedle
out faithful lovers than that supposed sorceresses), and Amaranta, a grand
‘lady’ who hails from the sticks but gives herself airs and graces.
Flirtatiousness and falsehood seem to be leading to tragedy before an
honest swain’s self-sacrifice sees the sea-monster struck by a thunderbolt
and its lair transformed into the Temple of Diana: the goddess descends, deus ex machina, the true lovers are re-united and all live
happily ever after.

The finer details of the plot of Giambattista Lorenzi’s libretto remained
elusive, though, even after this engaging and committed performance of
Stephen Barlow’s new production by the postgraduate students of GSMD. In
the first scene, Amaranta essentially sets out the stall by reading the
inscription on the Temple of Diana which proclaims that, ‘Every year two
faithful lovers will be sacrificed to the sea monster until a heroic soul
offers his own life. Only then will peace return to the land of Cumae’.

So, the hunt begins for a pair of faithful lovers to appease the goddess of
hunting and chastity, the chase being led by Melibeo who has his own
lustful eye on Amaranta. The problem is that faithful lovers are in short
supply, not least because to publicly declare one’s true devotion would
mean certain death. There thus ensues a parade of private professions of
love and swift public denials: necessity makes a virtue of fickleness.
Essentially Nerina loves Lindoro (Amaranta’s brother), but he loves Celia
(who is Fillide in disguise), who in turn loves Fileno (who, for an
unexplained reason, thinks Fillide is dead – bitten by a snake, presumably
a wry nod to Gluck). Perruchetto loves everyone, especially himself. The
intrigues, betrayals and back-tracking pile up until Melibeo, exasperated
by the repeated thwarting of his plans to matchmake some lovers whose death
will revoke the curse, and by Amaranta’s wild wilfulness, imprisons Celia
in a cave with Perruchetto, presumably assuming that she will emerge
unchaste. When she insists upon her preserved purity, he determines that
they will be serve to satisfy the sea monster anyway, prompting Fileno to
offer himself as a sacrifice instead. Cue Diana, waving her magic wand –
and skilfully wielding her long-bow to strike the dastardly Melibeo with an
arrow. 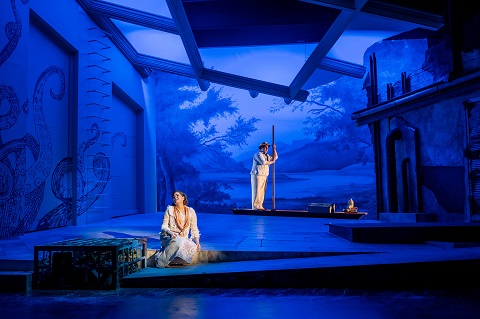 Barlow suggests that when he read through the libretto, his first thought
was that it was essentially an episode of Love Island.
Fortunately, his reflections did not stop there, and his production is a
charmingly insouciant mishmash of pseudo-antiquity, eighteenth-century
Classicism and modern-day motifs – a burlesque which effortlessly blends
past and present, exposing the foibles of others and ourselves.

Against a Claude Lorrain ‘landscape with piping shepherd’ back-cloth,
Adrian Linford’s set slopes rakishly down from a tentacle-embossed
seascape, across a Delphic shrine, towards the run-down back entrance of a
hostelry. A ‘ceiling’ open to the skies enhances the artifice. Amaranta
arrives, larger than life in floral mantua and high wig, and precedes to
smash her way through the devotional relics, sending floral and edible
offerings flying – noisily. Perruchetto wheels in on a roaring motorbike –
his ‘luxuriant’ locks trailing behind him in the breeze – in search of a
bottle, or two, of Bordeaux and a girl to swig it with. A Cambridge punt,
stacked with trunks, tomes and teddy-bear facilitates Fileno’s entrance,
his cricket whites gleaming under lighting designer David Howe’s Elysian
sunbeams. Nerinda’s polka-dot cigarette pants are a walking advertisement
for 50s’ style and the sharp-suited Lindoro matched her for sartorial
elegance.

At times the lighting emphasises the artificiality of proceedings,
elsewhere the sincerity of the sung sentiments. In the latter stages,
several arias are sung just before the soloist leaves the stage, and Barlow
foregrounds the theatrical pretence, and the opera’s eighteenth-century
origins, by having the singers return to the stage to formally accept the
applause post-aria. Similarly, a trap-door provided a welcome store of
props as required.

Haydn may be criticised for lacking Mozart’s theatrical nous and insight
into human relations. But, his score is wonderful, the seven main
characters well-drawn, and the sentiments of any scene or number absolutely
clear whatever the surrounding chaos. There is wit and lyricism, and much
terrific music for the singers to get their teeth into, and the first of
two casts were uniformly excellent. As satyrs and shepherds, the Chorus
were equally warm and hearty of voice. 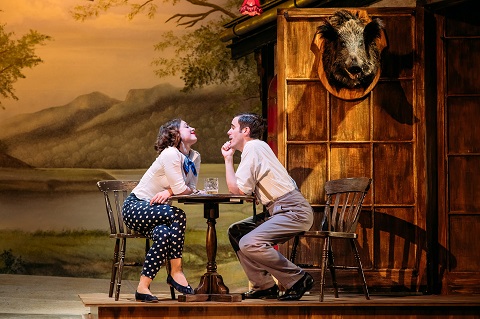 As the seria lovers Robert Lewis (Fileno) and Ema Nikolovska
(Celia) had a fine ear for the extended lyricism of their arias. Celia may
be disguised as a parasol-bearing shepherdess, but her nobility shone
through in the pair’s first act cavatina duet, while Nikolovska assured
shaped the imaginatively, and challengingly, structured ‘Ah come il core’
in which Celia contemplates her death. Her second aria was beautifully
enhanced by an impressive horn solo, and some fine violin and bassoon
playing. Lewis pulled off the tricky task of embodying the swooning swain,
balancing absurdity – when etching his suicide note into the tree his arrow
snaps – and honest heroism in the opera’s final moments. He had a fine way
with the recitative. Lara Marie M¸ller was a pert and natty Nerinda, but
she also exploited the tenderness in Haydn’s music. Damian Arnold’s Lindoro
employed an occasional, and fittingly self-absorbed, sob in his voice –
especially when the melodrama ran high.

Haydn gives Amaranta some strikingly sophisticated arias which suggest
there is more to the wild child than initially meets the eye, and Eline
Vandenheede impressed in a frenzied rage aria and, especially in the tragic
‘Del amor mio fedele’ in which Amarante’s humanity shone through her
humorous excess. Matthew Palmer’s Perruchetto was borderline unhinged but
vocally secure and had a musical and dramatic appeal, and madcap energy,
which suggested he would make a good Papageno. I’ve admired Adam Maxey’s
stage presence and suave, dark baritone in several performances of late and
he excelled again as the ugly, unctuous Melibeo, resisting the temptation
to overplay his dramatic hand and letting Haydn’s music do the work. Si‚n
Dicker was an exuberant Diana and Mian Shahmir Samee a calm fluting
presence.

Conductor Alice Farnham drew crisp playing from the GSMD Orchestra. The
overture was brisk and clean, the horn playing vibrant. It’s a long play,
and there are some sequences of slow arias which demand concentration and
care, but there was no sense of flagging dramatic drive.

In a letter of 1781, Haydn declared his confidence that his operas would be
assured of success if only they could be performed in one of the great
cultural centres of Europe: ‘… if only they could hear my Operette [L’isola disabitata] and my most recently composed opera, La fedelt‡ premiata, for I assure you that such work has
not yet been heard in Paris, and perhaps not in Vienna either. My
misfortune is that I live in the country.’ After this enjoyable evening –
imaginative, technically impressive – I couldn’t help think that if only we
heard Haydn’s operas more frequently today, in productions so full of witty
ingenuity, our own praise for his theatrical endeavours might be less
frequently diluted by comparisons with Mozart.