Aberdeenshire-born, Eleanor explains that she has a natural feeling for the
traditional Scots poetry, which is written in a register with which she is
entirely comfortable. “While a beautiful melody may be the thing that
immediately draws one’s ear to a particular song, when learning a song I
always think about the words first, about the focus of the song. If the
poem is ‘special’ then it will always be even more pleasurable to sing.”

Eleanor will perform three of the 25 songs which form Beethoven’s Op.108
set at

, accompanied by a piano trio comprising Joseph Middleton (piano), Natalie
Klouda (violin) and Caroline Dale (cello). At the time when Beethoven was
making his arrangements of these traditional Scots melodies and lyrics (the
arrangements were essentially intended as drawing-room songs aimed for an
audience of well-to-do Scottish amateurs) there was a vogue in Germany for
all things Scottish, especially the pseudo-Celtic works of Ossian and the
novels of Sir Walter Scott. It should, however, be noted

that there was little common ground between poets such as G.A. B¸rger and
J.W. von Goethe, and musicians such as Reichardt and K.S. von Seckendorff –
who, in the 1790s, developed a scholarly interest Scottish antiquity – and
composers such as Haydn who at the same time began to make arrangements of
songs with a realised bass line and occasional obbligato instruments to
fulfil commissions for British Scots song collections.

Haydn made almost 400 such arrangements (mostly of Scottish songs, but also
some Irish and Welsh songs) for collections published by William Napier (Original Scots Songs), George Thomson (A Select Collection of Scottish Songs), and William Whyte ( A Collection of Scottish Airs). And, it was Thomson who encouraged
Beethoven to compose his own Scots song settings, first contacting him in
1803 to suggest that he might write some sonatas on Scottish tunes and
later proposing that Beethoven might contribute to Thomson’s aforementioned
collection. However, it was not until Haydn died, in 1809, that Beethoven
began; the first of the Scottish tunes which he arranged appeared in volume
five of the Select Collection (1818) and it is this volume from
which the Op.108 songs are drawn.

Eleanor has chosen three songs which she describes as different in mood but
forming a well-balanced trio. The strophic ‘Bonny Laddie, highland Laddie’
is bright and jolly, while ‘Sunset’ is a more melancholy setting of a poem
by Walter Scott. ‘Faithfu’ Johnie’ has also been arranged for duet, with
male and female voice in dialogue.

In St Anne’s Church later this month, Eleanor will also perform Schubert’s Der Hirt auf dem Felsen (The Shepherd on the Rock, D965), with
clarinettist Peter Sparks and pianist Joseph Middleton. Completed in
October 1828, this was one of Schubert’s last compositions before his
premature death. It originated in a request from the singer Pauline Anna
Milder Hauptmann for something that she might sing in her concerts: ‘a more
brilliant music for the voice’ and something in which ‘several emotions can
be presented’.

Interestingly, Eleanor remarks that one of the (many) challenges of the
piece – which she initially learned for an end-of-year undergraduate
examination – relates to the structure and diversity of the work. There are
seven poetic verses, the first four and last by Wilhelm M¸ller, and verses
five and six by Karl August Varnhagen von Ense. The musical structure
divides into three main sections, each with its own demands. There are also
repetitions: “The singer needs to find different ways of doing the same
thing. And, the slower middle section is very sustained: you need to
reflect on the vocal colour and feeling. It’s technically very difficult.”
I wonder whether there are particular challenges when performing with
obbligato instruments: “Well, an instrumentalist will come at the work from
a different perspective, one perhaps less focused on the words and more on
melody and harmony; and one needs to listen to the colours that they
produce – one can copy, complement and gain inspiration.” 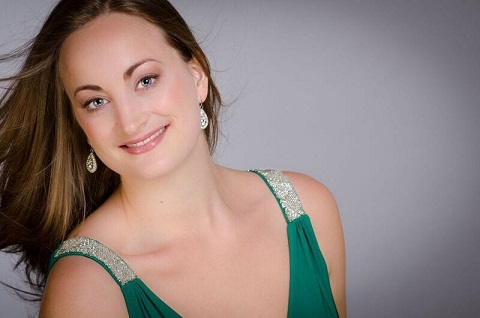 Eleanor regrets that the opportunities for her to perform chamber music are
few and far between; she would love to do more and looks back at her
student years when she had lieder classes exploring the songs of Schumann
and of Strauss, and which, she admits, she probably took for granted at the
time. But, she does not lament the wonderful operatic opportunities that
have come her way.

Eleanor is a graduate of the Royal College of Music’s International Opera
School and a former Harewood Artist at English National Opera. I think it
was with the latter company that I first saw her perform on the operatic
stage, in


in November 2012, having heard her sing in the

at Wigmore Hall earlier that year. “I’d performed opera in the Britten
Theatre at the RCM but my first opportunity to sing at the Coliseum with
English National Opera was just amazing. The size of the auditorium, and of
the chorus and orchestra. It was awesome.” I remember Eleanor, too, as a
‘poised and imperious’ High Priestess in Phelim McDermott’s season-opening
production of


in 2017, in which Tom Pye’s designs, Bruno Poet’s lighting and the bevvy of
dancers and acrobats seemed to me to have been judged by the creative team
to be more important than the score and singing itself – though that made
the production no less spectacular and enjoyable. “I’d imagined that I
would be singing from off-stage, but in fact I was not only on stage but
wearing a nude body suit: it was the right thing at the right time,”
Eleanor laughs. It was a case of seeing what evolved on the night, and the
singers were in need of a little more structure, whatever the merits of the
visual beauty and the kinetic vitality.

Britten’s music has played an important part in Eleanor’s musical and
professional development. She has commented elsewhere, “My first operatic
memory is being in the Peter Grimes opening chorus, aged
about four, and having the time of my life. From then on, opera just became
the thing I loved.” In the 2019/20 season Eleanor makes her debut with

Opera North as Miss Jessel in The Turn of the Screw

, a revival of Alessandro Talevi’s 2010 staging;
indeed, she is just about to commence a week of music rehearsal, prior to a
further three weeks of work in the theatre in the new year. “This is a big
sing, as big as Britten gets; I learned it for my Opera North audition, and
this was the first time that I’d really looked closely at the music. It’s
intensely dramatic, and really something to get one’s teeth into.” There’s
also the challenge of embodying a ghost, something that Eleanor is clearly
looking forward to!

2020 also sees Eleanor make her debut for the Grange Festival, as Helena in
a new production of

(Paul Curran’s production, seen in Europe, will be ‘remade’ for The
Grange). This has become almost a signature role for Eleanor: she performed
the part of the feisty Helena at

and the year before I saw her performance at the

in Netia Jones’ wonderfully magical visual spectacle. I remark that the
latter production was made even more bewitching by Iestyn Davies’
performance as Oberon: “Yes, it’s amazing – even in rehearsals – what he
can do with his voice,” Eleanor remarks generously, obviously delighted to
have been involved in such a creatively inspiring production.

I ask Eleanor what she finds so rewarding and stimulating about singing
Britten’s music: “It’s the way he sets words to music. Britten knows
exactly how to ‘colour’ words; and if you just sing what’s on paper – every
dynamic marking, accents, every dotted crotchet – then you will
communicate.” She finds Helena a particularly interesting comic character
to interpret. “At times she is playful – ‘I am your spaniel’ – elsewhere
flirtatious or furious.” Eleanor suggests that singers of Britten’s music
just need to listen to the orchestral fabric and harmony: there are
“crunchy dissonances, and deliciously playful, piquant harmonies” and the
orchestral sound embraces the voice.

I conclude with a customary question: what next? Strauss is clearly where
Eleanor’s heart lies (casting directors take note!). She is looking to
tackle some bigger roles, such as the Marschallin and Arabella, in future;
and, also, Wagner. But, then, there will always be room for Mozart, too:
for the Countess, Fiordiligi (my Opera Today colleague, Mark Berry, very
much enjoyed Eleanor’s performance at

But, first there come German Romantic interpretations of poetry, both
Scottish and German. At the very least, one can be assured that Eleanor
will fully inhabit the language with idiomatic nuance and native
fellow-feeling!