It was also—and perhaps more surprisingly to me—exceptional in that fine
musical performances rescued the evening from one of the silliest and most
bizarrely irrelevant productions of the work I have ever seen. (For what it
is worth, staging Lohengrin is an issue to which I have given a
good deal of attention; it is, for instance, the subject of a chapter in
one of my books,

.) Increasingly, I have felt that opera performances working only as
music—shorthand, I know—and not as theatre have little interest for me any
more; I may as well stay at home and listen to a recording or read the
score. This, however, was exceptional in that orchestra, singers, and
conductor managed to convince me that I had experienced a dramatic
performance of Lohengrin, acting included, that had little or
nothing to do with what Richard Jones had served up. 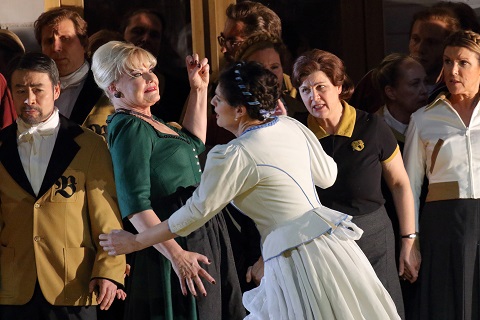 Jones presented a banal tale, if one may call it that, of a middle-aged,
middle-class heterosexual couple—a neglected group of whose experience we
all should hear more—marrying somewhere provincial and building a new house
there. That seemed to be it, save for when the house project did not work
out as planned and the house was no longer present. There was occasionally
promise of something else: brown-shirted uniforms suggested something
obvious at the start, yet disappeared in favour of an eccentric
combination—at least in any circles I know—of Tracht and
tracksuits. (Maybe savings needed to be made to finance the crane that
hoisted the roof onto the house.) For some reason, a difficult-to-read
floral inscription in the front garden imitated that on the front of
Wagner’s Wahnfried villa. Doubtless one could propose all manner of
symbolic explanations concerning what various things might have meant; one
would have to, really, since the production appeared not to bother. I am
sure we are all, ‘in a very real sense’, as an Anglican bishop might have
it, building a house, and so on and so forth, but really. King Henry the
Fowler appeared to be a marriage celebrant, not unreasonably confused by
proceedings around him; quite who most of the others were eluded me. Swords
sat awkwardly with the narrative, to put it mildly, yet at least reminded
us that Wagner’s opera has a more involving story to tell. All was blocked
well: credit where credit is due to the Abendspielleitung
(Georgine Balk) and, presumably, to the original production. I cannot
imagine otherwise what else, if anything, ran through Jones’s head. O for a
Hans Neuenfels, a Peter Konwitschny, a Stefan Herheim…

Lohengrin
‘itself’ fared much better. Anja Harteros took a while to warm up, her
first act Elsa veering in and out of focus, verbally as well as musically.
Once focus had been achieved however, hers was a battle royal with rival
Schillerian queen—and sometime Elsa—Karita Mattila. To see and hear the two
was to experience something akin to a duet between finest woodwind
principals, timbres contrasting yet complementary, albeit with finely honed
words and gesture too. The greatest Ortruds command attention even during
the first act, the character onstage yet having little to sing. Waltraud
Meier did the first time I saw her on stage; so here did Mattila, her
interpretative and communicative zeal amply compensating for the vacuity of
Jones’s production. Klaus Florian Vogt’s Lohengrin did not settle
immediately and is famously not to all tastes. For me, it works
considerably better than his other Wagner roles, a sense of unearthly
‘purity’ not at all inappropriate; like his Elsa and Ortrud, he offered a
consummately professional performance throughout. So too did Wolfgang Koch
as Telramund. An estimable, always likeable artist, he sometimes seemed
slightly out of sorts, but there was no doubting the intelligence of his
properly Wagnerian blend of word and tone; likewise Christof Fischesser’s
King Henry. Gantner’s excellent Herald fully lived up to expectations, as
did the Tˆlz trebles acting as pages and their Brabantian noble colleagues. 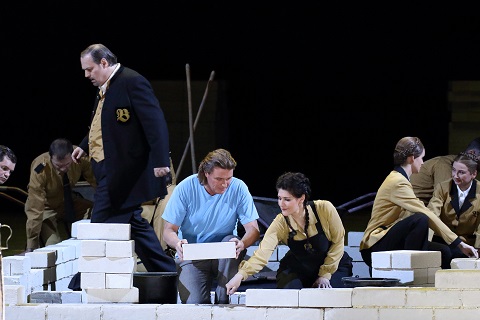 If the orchestra was not always quite on peak form, the first act Prelude a
little bumpy at times, one would have had to be wishing to find fault to be
disappointed. Its strings sounded golden, more Vienna or Dresden than, say,
Berlin, though there were naturally darker passages too, not least during
the Prelude to the second act. Characterful woodwind and a brass section
capable of sometimes breathtaking tonal variegation offered further
orchestral pleasure and insight. Lothar Koenigs’s direction of the whole
was sane, sensitive, and unassumingly purposeful. It certainly never drew
attention to itself, which, after

a certain conductor at Bayreuth this summer

was more than welcome, but instead gave the impression of ‘natural’
communication of Wagner’s melos. There were a few cases of
surprising disjuncture between pit and chorus, but they were rectified soon
enough and did little to spoil one’s enjoyment of some fine choral singing.
All in all, then, an interesting evening—if not quite in the way one might
have expected.