The grand foyer of the San Francisco opera house was already decked out in green boughs and red bows though Thanksgiving has yet to come. It’s the time of year when some adults think about exposing their children to high art, albeit art that is perceived to be accessible to their innocent psyches. And opera and ballet companies want to take this urge to the bank.
This production by British designer Anthony McDonald, a veteran of several British Nutcracker productions, does wish to tug a bit at your heartstrings more than frighten your children. During the overture you learn that a poor family living in a quite lush and scenic Alpine meadow has insufficient food on its dinner table.
But the two resourceful children in search of strawberries conjure a quite wonderful adventure for themselves in an enchanted forest of golden hued trees filled with fanciful spirits. It was fun to identify these witty additions to the story — I saw Cinderella, Little Red Riding Hood and Rapunzel, but there were more.
A lively wood sprite ballerina opened hidden doors on the ornate frame that was a false proscenium to bring on a charming hook nosed, miniature soprano sandman to sedate the children and later a lovely, white dew fairy to awaken them. Atop the ornate frame was an elaborate cuckoo clock that revolved backwards during the overture taking us back to another time, and of course later participating in the children’s musical games. 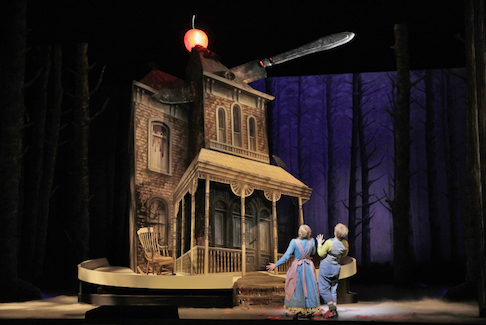 The Gingerbread House
Though the gingerbread house did not look very tasty (an all brown Victorian cottage with a great big illuminated cherry on its top), it revolved to expose a huge marmite that broke open to reveal a boiled and charred witch, the only macabre moment of the evening and it seemed out of place. For the record the witch was first female, then male thus avoiding a stereotypical witch branding.
There was gorgeous horn playing to begin the evening (and in fact throughout the evening), conductor Christopher Franklin evoking very bright playing from his orchestra that made the performance far more folksongish than Wagnerian. All the familiar pieces of the opera were in great relief, though the beautiful little prayer was uncomfortably soft and somehow the chorus of reanimated children at the end lacked meaning, possibly because we never really felt that Hansel and Gretel were threatened to begin with.
The wanted charm of the evening did not overcome the prevailing atmosphere of boredom I felt. And if I was bored I assume that all those targeted families will be a bit bored as well. For the record the audience was not families (I did saw three or four children) but the usual San Francisco opera audience who are now offered but eight annual operas. This could be a sufficiently satisfying number if all eight were of sufficient weight. 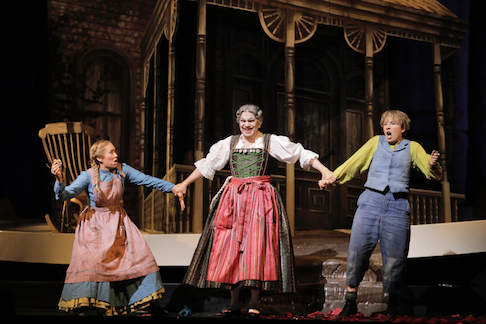 Hansel and Gretel with the Witch
Hansel was mezzo-soprano Sasha Cooke of beautiful voice and strong tone, Gretel was soprano Heidi Stober who brought infectious energy and fine singing to her role. Mlles. Cooke and Stober are regulars at San Francisco, as is Michaela Martens who was effective as the mother. Alfred Walker, a bass-baritone from New York, provided a beautifully sung father while underlining the ethnic diversity we take for granted in opera. Tenor Robert Brubaker brought charm rather than menace to the Humperdinck witch. Adler Fellows Ashley Dixon and Natalie Image were, respectively, the Sandman and Dew Fairy. Ballerina Chiharu Shibata offered lovely sous-sus and graceful pas de chat to the Woodsprite.
Hansel and Gretel was sung in an English language translation by David Pountney.
Michael Milenski