If for nothing else her relative youth becomes the Abbe PrÈvost’s teenage heroine, plus this young soprano is in her vocal prime, may it endure for years to come.
The driving force of this splendid (in part) evening was conductor Nicola Luisotti who attacked an excited piazza in Amiens with such energy that I feared for the tenor of Puccini’s delicate (well maybe not-so-delicate) love scenes to come. But the maestro made the moment Manon falls in love with des Grieux so delicate that it almost seemed real, the subtly discovered emotions flowing in beautifully colored orchestral chords. The maestro, with Puccini, let us know that love itself was to be the unquestioned muse of the evening.
The second act resolutely explored the intimacy of Manon’s feelings, the maestro in total sympathy with Mme. Haroutounian’s exquisitely intoned “in quelle trine morbide,” the soprano locked totally within herself. And then came the impassioned duet with des Grieux “Tu, tu, amore, tu, ah! mio immenso amore,” the maestro riding the emotional crests of love with orchestral harmonies and phrasing of sweetly charged color. And finally in the last act Manon’s wrenching “Sola, perduta, abbandonata” sung, initially supine, the soprano lost within herself, the maestro offering only the woodwind desolation of love lost in the Louisiana desert.
The evening at its best was this elegant duet of the maestro with the soprano. 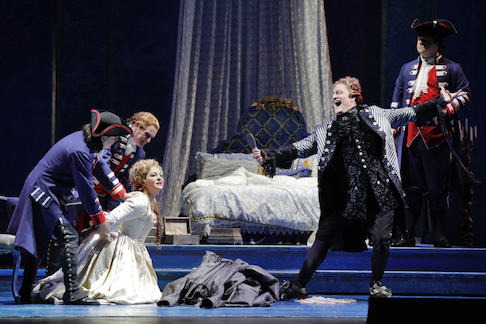 Geronte de Revoir (Philip Skinner) relishes the arrest of Manon (Lianna Haroutounian)
Lianna Haroutounian is one of the rare artists who communicates every word she sings. She possesses a very beautiful, clear, youthful voice of full lyric strength. Coupling voice with small physical stature and extraordinary communicative powers has made Butterfly la Haroutounian’s rÙle fÈtiche, as seen on many of the world’s major stages. It is likely her Manon will now find very great appreciation as well.
The role of the Chevalier des Grieux was delegated to tenor Brian Jagde who has already sung 13 other roles at San Francisco Opera. Mr. Jagde is a fine singer and enjoys a deservedly successful career. There are however, and fortunately for Puccini, many other tenors in the world who might actually have discovered the poetry of this Romantic hero’s hopeless love for a sympathetic if neurotically narcissistic heroine. As it was Mr. Jagde remained first and foremost a tenor and never a lover. If at first we were impressed with the glories of his vocal maturity, they wore thin by the time we reached Louisiana where there was a hint that maybe something more might occur, but that was very late in the evening.
Baritone Anthony Clark Evans made Manon’s brother called simply Lescaut everything he needed to be — first of all of fine voice and then of suave presence. Mr. Evans found as well the avidity of provincial nobility and a touching fraternal sympathy for his sister that hugely complemented the Haroutounian performance.
The myriad of small roles were relegated to current Adler Fellows (the “Adlers” are the participants in San Francisco Opera’s operatic finishing school) who were cool performers (“cool” in its highly complimentary use meaning stylishly by the book). Of note was the Edmondo of tenor Christopher Oglesby. Four members of the San Francisco Opera Chorus created an impressive madrigal! 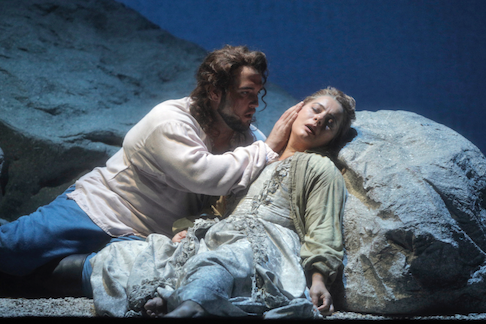 Manon and des Grieux in Lousiana
Conductor Luisotti revealed the beauties of love that we learned lay hidden within Puccini’s score, and he discovered an elegance of subtle emotions that is unusual in Manon Lescaut readings. More often conductors and productions focus on the verismo in Manon Lescaut — its brutalities. Each of its four brutal episodes (acts) do in fact resolve in an enormous emotional rush. In the Luisotti Manon Lescaut there was instead the overwhelming revelation of love. In the end there was even the sense that one might shed a tear.
What the 2005 Olivier Tambose production from the Lyric Opera of Chicago had to do with any†of this is a mystery.† It was in its own world and I’m not sure what world that is.†In the first act there was precise detail in the setting but often highly stylized, choreographed and symmetrical staging, like operetta.†This in contrast to a basic naturalism of blocking in the second act (except when Lescaut leaped foolishly onto Manon’s sumptuous bed to praise her beauty). Mr. Tambosi did offer a gratuitous dose of realism in the third act with the shocking brutality of the flinging to the ground and branding of the women prisoners as they were to shipped off to Louisiana.
There was the inexplicable casting of bass Philip Skinner as Geronte de Revoir (Manon’s rich lover) that added a peculiar, out of place, rough caricature in the otherwise careful Second Empire elegance of the setting and costuming. Mr. Skinner is an excellent character singer and a wonderful San Francisco Opera resource when appropriately cast.
Conductor Nicola Luisotti was the San Francisco Opera music director from 2009 to 2018. He elicited a superb performance from the orchestra he honed into one of the world’s finest. It could be a revelation if this maestro were ever given a production that approaches the conceptual level he brings musically to the operas he conducts.
Michael Milenski