– a megalomaniac who treated his wives (invariably much younger) and
children, callously and carelessly. A sexual predator, Chaplin reportedly
estimated that he had slept with 2000 women. In The Charles Chaplin Archives (2015), film historian Paul Duncan
details the scandals – and scandalous efforts to avoid them – paternity
suits and divorce proceedings which led, in 1945, Senator William Langer to
put forward a bill calling for ‘the Attorney General to investigate and
determine whether the “alien” Chaplin should be deported because of “his
unsavory record of law breaking, of rape, or the debauching of American
girls 16 and 17 years of age”’.

So, one asks oneself, why did German director Christiane Lutz (making her
Glyndebourne and UK debut) think that Chaplin, whom she describes as “an
iconic comedian” with “charisma”, has anything in common with Verdi’s cruel
but vulnerable hunch-backed jester, Rigoletto, whose principal aim in life
is to protect his daughter, Gilda, from the corruption of contemporary
society to which he, as he is self-laceratingly aware, contributes?

Lutz takes the 1930s Hollywood studio system as her setting and starting
point. And, this doesn’t seem unreasonable. After all, the casting-couch
sexual predator was no less common then than during our #MeToo age, and the Duke as Hollywood mogul wouldn’t be a far-fetched
notion – just as the Duke as US President, seen last week in

of John Macdonald’s 2002 Rigoletto is a credible notion. Indeed,
Richard Carr, Lecturer in History and Politics at Anglia Ruskin University
and author of

in February 2012, when co-hosting a dinner to honour Chaplin’s services to
the movie industry, Harvey Weinstein remarked that he regarded Chaplin to
be “one of my idols, certainly”. ‘At the time, this appeared to be a fairly
run of the mill commemoration in Tinseltown, but, in the light of recent
revelations about Weinstein, we may now have to view it in a rather
different light,’ writes Carr.

However, there’s a chasm between Verdi’s taunting and tormented jester and
Chaplin, who is often presented as an arrogant genius who manipulated those
around him with no remorse. I seem to have spent much of the past week
reflecting on the relationship between the composer’s score and the
director’s creative response to it, in the theatre and in different
receptive contexts, but while the two WNO productions that I saw in
Birmingham, and the previous evening’s winning


gave much pleasure, even as they raised questions, after sitting through
Lutz’s overloaded, often messy and illogical, and sometimes absurd
production, I found myself siding with pianist Sir Andr·s Schiff who, in
2014, in

, despaired: ‘What is it with directors? Why is it that most directors find
it so hard to fade into the background and stand in the shadow of the work?
Where did they acquire this addiction for self-expression, pomposity and
disrespect? Why there no humility or modesty? Why this panic fear of
boredom?’

Things didn’t get off to too bad a start, though. A Chaplin-esque
silhouette, visible through a white screen, indulged in some idiomatic
gestural vocabulary, before an old man (actor Jofre Caraben van der Meer)
in modern dress walked into a circle of light. As the Prelude began its
dark dramatic signposting, so the figure stripped off jacket, jumper and
trousers and spun around on the floor on his belly, in underpants and vest,
obsessively writing the single word “forward”, over and over, as it was
simultaneously etched, blotched and obliterated before our eyes on the
screen projection. A short grainy clip of a retired actor, looking back
with nostalgia and bitterness followed. These were, apparently, two of the
three Rigolettos which Lutz leads us to expect: the young man, the older
man fighting against his fate, and “an old man regretting that he can’t
change the past”: “In a movie you can always cut and re-shoot, but in life
of course that’s not possible.” 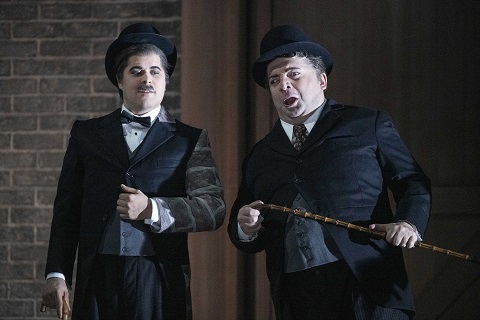 Thus, Lutz has laid the prefatory groundwork, and Act 1 opens in the
spacious brick ‘warehouse’ designed by Christian Tabakoff, a studio-set in
Hollywood’s Golden Age replete with cine-cameras, film techies, extras,
PAs, costume racks and scissor-action bamboos chairs emblazoned with the
names of the significant players: ‘Duca’, ‘Rigoletto’, ‘Monterone’. An
actress, posing against a monochrome backdrop, is harried away by the
director-cum-Duke. Rigoletto, a comic lead, waddles about ‡ la
Oliver Hardy and indulges in some business with a Chaplin-style walking
cane. But, the mood is mild and there’s none of the decadence and
viciousness, jealousy and conflict, that one might expect in Verdi’s
opening scene. The debauchery is going on behind-the-scenes, it appears,
for it’s not long before Monterone – Aubrey Allicock in resounding voice,
wearing a plum-coloured suit to match his face purple with anger – appears,
alongside his daughter (the afore-mentioned actress), who is carrying her
new-born babe.

As Monterone denounces the depraved Duke/director, his daughter (aerialist
Farrell Cox) flees up a fly-tower, subsequently to fall in a slow-motion
suicide, rolling head-over-heels, her white skirts billowing like an
angel’s wings. The shock – or Monterone’s subsequent curse – is clearly a
game-changer for Rigoletto: the surtitles tell us that it’s ‘17 years
later’, and the babe-in-arms abandoned on the studio floor is now a young
woman who is under the impression that Rigoletto is her father. Some
unpleasant incestuous relations seem inevitable. 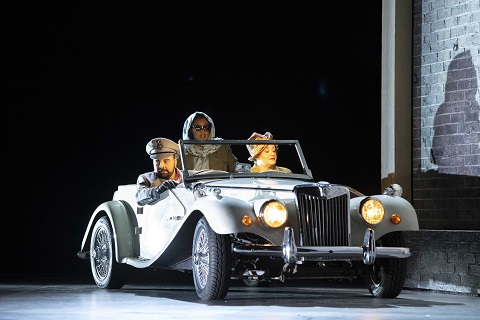 Rigoletto is clearly not a jobbing actor living in a hovel, so we don’t
visit his home. Sparafucile emerges – literally, his suit is half-brick,
half-black – from the walls of the cavernous empty studio; his murderous
suggestions – subtly delivered by Oleg Budaratskiy, whose villainy vocal
and otherwise are of the swift, understated kind – are overheard by the old
man whom we saw in the opera’s opening moments (at least now clothed). And,
it’s to the studio that Gilda rolls up, driven by a chauffeur in a smart
car, with chaperone Giovanna (a rich-toned Natalia Brzezi?ska, a GTO Chorus
member) in tow. As Gilda questions Rigoletto about her mother, we see the
Duke bribe the chauffeur and don his livery.

At this point, I began to lose sympathy with Lutz’s concept and execution.
Matteo Lippi’s Duke is confident and controlled, vocally and dramatically,
but there is no chink of ambiguity that might intimate genuine feelings for
Gilda – and, in any case, she’s his daughter! Gilda is initially alarmed by
his advances, though she submits, inevitably, to his power and privilege.
In the following scene we see a smirking Duke complete his deal with the
chauffeur, handing over the readies and returning the latter’s uniform in a
corner-seat of Sparafucile’s bar – more Victorian boozer than Hollywood
watering-hole. ‘Parmi veder le lagrime’ the Duke may sing, from the comfort
of his director’s office, but these are crocodile tears. The falsities of
‘La donna Ë mobile’ – here, bright, agile and virile – represent his
‘sincerity’. 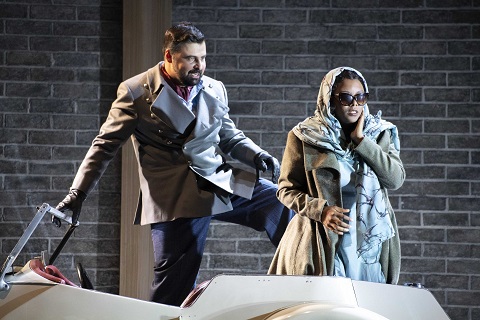 The abduction is similarly unconvincing. For some reason, Gilda runs into
the ladies’ lavatories, narrowly avoiding meeting her own ‘father’ on the
hostelry doorstep. The assembled film crew talk of running off with
Countess Ceprano but there’s no clear sense of ill-will towards Rigoletto –
or ‘his mistress’, as in Piave’s libretto. Some Laurel & Hardy-style
japes with a ladder ensue, distracting Rigoletto, and Gilda is abducted –
all without a jot a theatrical tension. 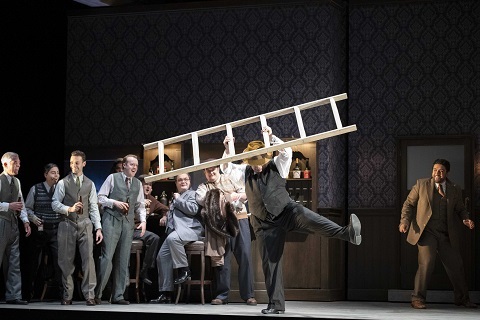 It doesn’t get much better when Monterone re-appears, to be ‘condemned’ –
in what court, for what ‘crime’? – accompanied by the ghost of his ‘fallen
angel’, as our aged haunter strokes the floor onto which she fell
(seventeen years ago). Fortunately, there’s no directorial concept on earth
that can destroy the expressive power of Verdi’s Act 3 Quartet. And, though
encumbered with a frightful maid’s costume and soapy mop, Madeleine Shaw’s
Maddalena is striking of voice. As the tragedy plays out, our haunter –
perched on a bar stool – is joined by a grey-haired Duke: it’s all rather
Dickensian, as Time Future visits a Time Present afflicted by the deeds of
Time Past. Without revealing Lutz’s concept-closer, let’s just say that the
time-travelling visitants have a role in the denouement. 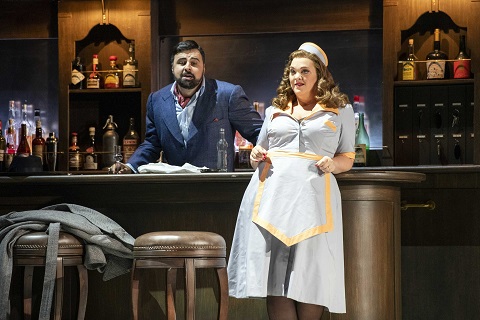 The central duo – who is this case are not father and daughter,
thereby sending the whole action spinning into a psychological no-man’s
land – do their best, and often that is very good. Vuvu Mpofu is no
ingÈnue, at least vocally – her soprano burns with passionate feeling, even
if here it is directed at some pretty dodgy targets – and she gives a very
credible dramatic reading in the lamentable circumstances. Nikoloz
Lagvilava makes up for some lapses in accuracy and intonation with a vivid
commitment and a strong, burnished sound that rings with as much genuine
anguish as is possible within this dramatic concept. If at times this
Rigoletto seems somewhat detached, then perhaps that’s because this Rigoletto is not the eponymous jester’s tragedy, but the Duke’s –
and the latter doesn’t seem to care.

Thomas Blunt conducted a careful, often surprisingly understated – but no
less effective for that – reading of the score; the GTO textures were clear
and the colours well-defined. Thanks to some fine singing and playing – and
because The Marlowe Theatre, refurbished and reopened in 2011, is such a
fine venue in which to experience opera – this wasn’t an ‘unenjoyable’
evening, but it was a frustrating one. Verdi and Piave created a terrific
tragic tale; the director’s duty is surely to tell it.