Handel’s tangled tale of an episode during the First Crusade at the end of
the 11th century, drawn from Torquato Tasso’s epic Gerusalemme Liberata, is transferred to a 20th-century
boarding-school. Rinaldo’s heroic exploits – as he seeks to rescue his
beloved Almirena, with the help of fellow Christian knights, her father
Goffredo and brother Eustazio, from the dastardly clutches of Argante King
of Jerusalem and the sorceress Armida, and eject the Saracens from the Holy
City – become the wish-fulfilment dream of a frustrated adolescent, bullied
by his peers and beaten by his schoolmasters.

Perhaps it’s the historic and stylistic ‘distance’ of Handel’s operas from
our own time that encourages directors to overlay (overload?) them with
fanciful dramatic conceits, elaborations and excesses. Some might view such
meddling as disrespectful – to composer and audiences alike – but perhaps
such ‘translations’ are in keeping with the spirit of the
original? If we accuse such directors of ‘look-at-me-cleverness’, then
isn’t that just what Handel was ‘guilty’ of when he and showman-impresario
Aaron Hill presented the first performance of Rinaldo, at the
Queen’s Theatre Haymarket on 24th February 1711, dazzling the
audience not just with the vocal virtuosities of Handel’s ‘newly imported’
all-Italian company of star soloists, but also with excesses of lavishness
in the form of fire-snorting dragons, flocks of sparrows, mermaids and
aerial machines?

Contemporary literary critics held their collective noses, suspicious of
this new Italian art form which curmudgeonly ‘roast-beefers’ termed ‘an
exotic and irrational entertainment’. In The Spectator, Joseph
Addison and Richard Steele took every opportunity to satirise Italian
opera: ‘Spectatum admissi risum teneatis?’ (‘If you were admitted
to see this, could you hold back your laughter?’) was the Horatian epigraph
chosen by Addison for an account of Rinaldo which stressed the
dangers to theatre-goers posed by the illuminations and fireworks: ‘there
are several engines filled with water … in case any accident should
happen.’ Steele derided the real-life sparrows which took flight during
Almirena’s ‘bird-song aria’: ‘there have been so many flights of them let
loose in this opera that it is feared the house will never get rid of them;
and that in other Plays they may make their Entrance in very wrong and
improper scenes … besides the Inconveniences which the Heads of the
Audience may sometimes suffer from them’. When the stage-crew forgot to
move the wing-flats, the critics’ could not contain their glee: ‘We were
presented with the prospect of the ocean in the midst of a delightful grove
and I was not a little astonished to see a well-dressed young fellow in
full-bottomed wig, appear in the midst of the sea, and without visible
concern taking snuff.’

But, the opera was a sensation, Handel’s first London triumph: Rinaldo received 15 performances and was revived a number of times
in the years to 1731. Addison et al seemed to have been most
concerned with the liberties that opera takes with ‘reality’. In contrast,
Carsen relishes such liberties. And, if in 2011 there was some scepticism
about Carsen’s school-boy adventurism – Boy’s Own Magazine meets Harry Potter – then with each revival attitudes have softened,
warmed, and now the production looks to become a much-loved repertory
stalwart at Glyndebourne. Certainly, the capacity audience at the Marlowe
Theatre in Canterbury loved it. 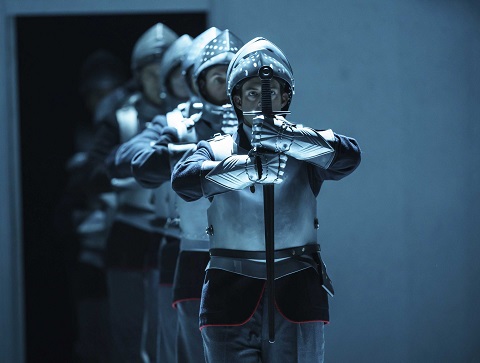 Gideon Davey’s single set serves as white-washed classroom, schoolyard,
trainee dominatrices’ dormitory, and battle-cum-sports field. Smart in
regulation blazer and tie, Rinaldo enters the empty schoolroom at 8.55am,
pulls a portrait of his beloved from his satchel and pastes it inside the
lid of his school-desk. A globe sits imperiously upon the Headmaster’s
desk, a reminder of the Crusaders’ colonial imperialism, perhaps. The
blackboard is blank: a tabula rasa for the unhappy teenager’s imagination.
Just before the bell, a rowdy bunch of his peers burst in and, scenting a
weakness, see an opportunity for some sadism and bullying. And, why not?
They are, after all, only aping the Master and Mistress who then treat
Rinaldo to a caning. 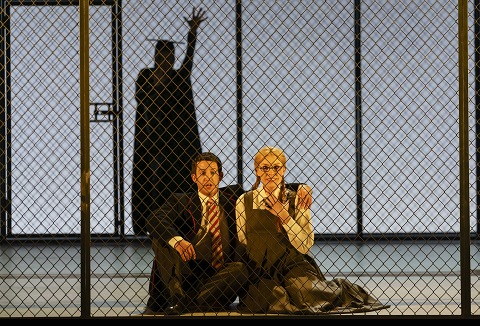 However, as writers from Lewis Carroll to Philip Pullman have long known, a
child’s imagination sets them free. So, it’s off through the
blackboard-glass we go. Rinaldo and his classmates don silver breastplates
over their blazers; the Headmaster is transformed into a scheming Saracen,
while the Mistress morphs into a school-boy’s fantasy: a slinky sorceress
in dominatrix leather. Fired by Goffredo’s promise that victory in battle
will earn him Almirena’s hand in marriage, Rinaldo tracks down his beloved
amid the bicycle racks, only for Armida and her brigade of black-arts
bandits – who’ve traded their burqas for gothic fishnets and miniskirts –
to snatch her from his arms.

The ‘Crusaders’ set off to rescue her on flying bicycles – ET meets Mary
Poppins – stylishly choreographed to intimate the equestrian exploits of
their historical predecessors. There is visual spectacle and satire in
equal measure. A siren-chorus of identikit Almirenas tricks Rinaldo into a
boat and he finds himself imprisoned in Armida’s dormitory. Just when it
seems that Alminera faces certain death, the Christian Magician’s word
proves true – despite the mad scientist’s earlier explosive
experimentations in the chemistry lab – and Goffredo and Eustazio ‘storm’
Armida’s palace. Well, some heroic knights leapfrog the ramparts with
impressive athleticism, while others engage in a Morecombe & Wise
routine: a Fosbury flop pratfall prompts some self-preserving pragmatism
as the scenery is lifted, allowing the straggling Crusader to crawl his way
through. 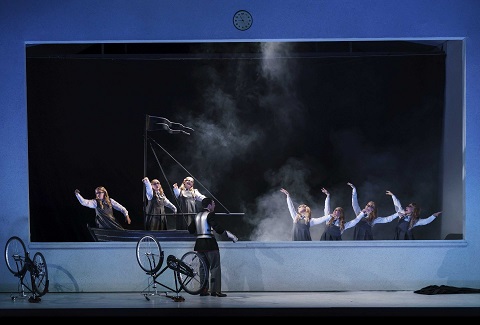 The final showdown takes place on the school playing-field, where, after
all, all significant battles are won: lacrosse and hockey sticks clash as a
large ball (the schoolmaster’s globe) floats balletically on the end of a
stick, imbuing the fight with cartoonish grace. Naturally, the Christian
Crusaders are triumphant. Rinaldo finds himself back in the empty school,
the clock-hand not yet telling nine o’clock …

The light-hearted lunacy of the proceedings was beguiling and undoubtedly
made more enchanting by the soloists’ mastery of the musical idiom. Jake
Arditti is no stranger to outrÈ Handelian outings, having sung the title
role in Longborough’s 2014 production which saw him cast as the strong-man
in the megalomaniac ring-master Argante’s circus. Here, he displayed
infinite stamina, streaming through the vocal fountains with pinpoint
precision, a fair amount of vocal embellishment, and envincing martial
confidence and heroic conviction. ‘Cara Sposa’, which Handel himself
considered one of his finest arias, was beautifully phrased and if it did
not seem quite languid enough to really touch one’s heart, then perhaps
Carsen’s prevailing comic irony made such sincerity hard to accomplish. 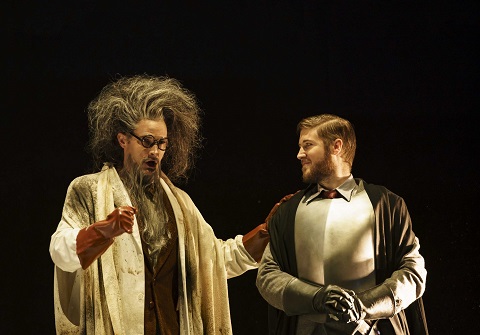 Arditti’s fellow countertenors matched him for style, though James Hall’s
Goffredo needed a little more weight and stature, especially at the end of
Act 1 when he learns of his daughter’s kidnapping by the forces of
darkness. Tom Scott-Cowell’s Eustazio offered a lyrical complement to both.

Anna Devin sang Almirena’s ‘Augelletti, che cantate’ with purity and poise,
beautifully accompanied by the trilling birdsong of Rebecca Austen-Brown’s
sopranino recorder. ‘Lascia ch’io pianga’, in which the imprisoned Almirena
laments her fate, was also beautifully shaped, but I’d have liked a little
more hint of the intensity and spirit with which the maiden urges her
heroic rescuer on to victory. 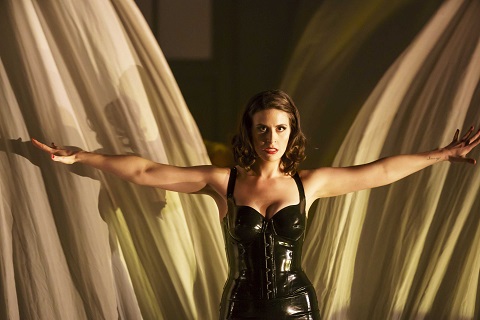 The task of delivering the feisty fury was left to Jacquelyn Stucker who,
as a fire-and-brimstone Armida, topped the vocal honours and commanded the
dramatic stage. Resplendent in shiny black latex – as fearsome as
Maleficent, that ‘mistress-of-all-evil’ in Disney’s Sleeping Beauty – Stucker sang with a sparkle like the luxurious
shine of rubies as Armida stamped and scorched her way through any obstacle
that dared to confront her. Like the scythe she wielded with relish,
Stucker’s soprano evinced a glamorous intensity with a real glint of
danger. It had both bite at the top and succulence in the middle, as well
as darkness at the bottom: it’s hard to imagine a soprano with the power
and range more suited to embody the evil enchantress’s schizophrenic
mood-swings – first she wants to destroy Rinaldo, then she wants to debauch
him, seduced by his heroism and nobility. Armida’s hissy-fit when her plans
are thwarted, and Argante proves unfaithful, was a sight to behold:
bed-linen and furniture went flying asunder, and she whipped through
Handel’s torturous runs, savouring the virtuosity. No wonder her acolytes
cowered and cringed before her. Aubrey Allicock’s Argante also seemed a
little overshadowed at times, though Allicock made a strong contribution to
Carsen’s irony.

The superb cast were supported by buoyant playing from the reduced-sized
Glyndebourne Tour Ochestra, conducted by David Bates. The recitatives had
vivid energy, supported by David Miller’s creative archlute, which
complemented the stage action; the fast numbers bubbled effervescently
while the more reflective numbers had time to make their mark.

I confess that my natural inclination is to flinch from the sort of
dramatic dabbling in which Carsen indulges here; but on this occasion I
found myself increasingly relishing an insouciant irreverence – and sheer
sense of fun – that Handel himself would surely have enjoyed. Such
cheekiness also has the merit of taking the spotlight off the Christian
triumphalism of the close: “O clemency of Heaven!”, “Blessed Fate!”,
“Virtue has triumphed!” cry the elated, conquering Crusaders. “O happy we!”
is the choric conclusion.

“After such cruel events, I don’t know if I am dreaming or awake,” says
Almirena, when she is rescued by her warrior-hero. And, at the conclusion of Carroll’s Alice in Wonderland Alice berates her sister Kitty for waking her,
reflecting on “who it was that dreamed it all. This is a serious question …
You see, Kitty, it must have been either me or the Red King. He was part of
my dream, of course—but then I was part of his dream, too!”


In a Wonderland they lie,

Dreaming as the days go by,

Dreaming as the summers die:


Ever drifting down the stream —

Lingering in the golden gleam —

Life, what is it but a dream?

Sentiments with which, one imagines, Carsen would concur.