Instead, Davies and designer Leslie Travers, in their attempt to examine
the sexual politics of Carmen through a contemporary lens,
transfer the action of the opera to the ‘world of Brazilian favelas and the
tight community within’. They cite the Brazilian government’s
implementation, with the assistance of the army, of the favela eradication
in the 1960s – and the poverty, violence and lawlessness that characterised
the favelas – as evidence in support of their argument that this world fits
‘the economic and sexual politics of Carmen’ and is ‘a good home
for Carmen’s wild Bohemian spirit’.

At least, that’s what Davies tells us in a programme booklet article which
I did not read until after the performance. Looking at Travers’ grey,
gritty set – a curving edifice that served, pretty effectively, as run-down
tenement block, soldiers’ barracks, Lillas Pastia’s tavern in the shadow of
the ramparts, mountain-side smugglers’ den, and bull-ring arena – I had no
sense of the ‘visual flavours of Latin America’ that Travers and costume
designer Gabrielle Dalton are reported to have researched. 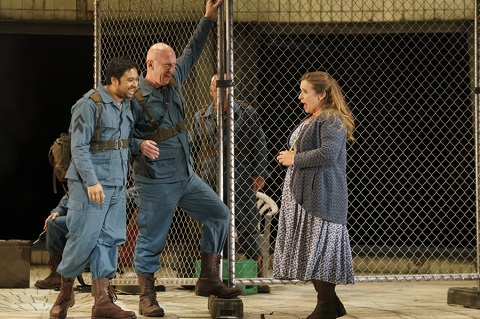 Not that it mattered. The opening moments of the production may not have
dazzled our eyes with the oranges and golds, gleaming in the bright white
light, of a square in Seville, but the grimy compound enclosed by metal
grilles, through which the smirking soldiers leered at passing young girls,
and the towering tenements strewn with sagging washing-lines, made for a
persuasive, if indeterminate, locale. As the grilles were swivelled when
the working girls finished their shift at the cigarette factory, we were by
turn both outsiders and insiders, a fitting metaphor for the opera’s
tensions and divisions. 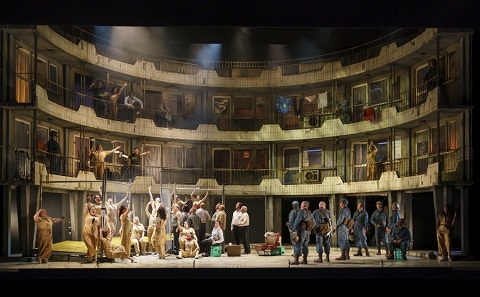 There was, however, little sense of racial conflict. This Carmen was no
foreigner on Spanish soil, a traveller from lands flung far and wide, who
challenges a society that cannot accept the outsider for fear of denying
itself. Her wildness was not a sort of gypsy madness, rather a wilfulness
born of frustration and a desire for freedom. Fair enough. But, there was
similarly no sense of the class conflicts that oppress Carmen (reflecting
the contemporary tensions between the middle-class and the large, malleable
labour force upon which the bourgeoisie depended in Bizet’s France),
despite Davies’ suggestion that Carmen is a sort of nineteenth-century Jade
Goody, cut from a similar working-class cloth.

If you excise race and class, you’re left with gender and
nineteenth-century cultural ambivalences about women and female sexuality.
Indeed, Davies’ principal aims seems to have been to take a feminist stance
and pose some #MeToo questions in the context of contemporary sexual
politics. But, while she asks, ‘whether Bizet’s ending would be the same,
or any different were he writing today?’, Davies’ production doesn’t
actually venture very far in exploring this question. Some of the spoken
dialogue may have been revised, but since it’s in French this will pass
most of the audience by, unless they glance up at surtitles which are
out-of-kilter with the stage action. Instead, what we have is a
conventional telling of an ‘old’ tale: the silencing of a sexually
confident woman by a society afraid of her liberated spirit. 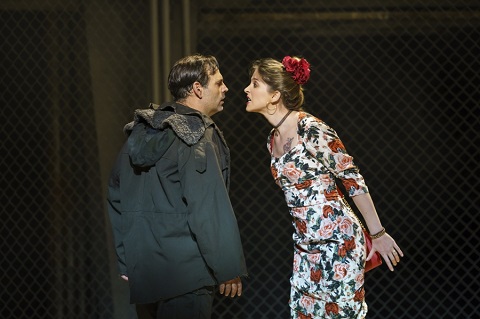 Fortunately, Davies has an excellent cast to tell this tale. French
mezzo-soprano Virginie Verrez’ Carmen really does charm and entrance when
she sings, even if her actions and behaviour are often more aggressive than
provocative. Carmen clicks, not castanets, but empty shot glasses; she
douses a soldier in liquor and taunts him with a lighted match, laughing
viciously. Charming. Though more likely to be wielding a Kalashnikov than
castanets, Verrez still seduced: she has a lovely silvery, silky mezzo
which can shine brightly or sink into darker hues, and she moves between
the two with confidence and expressive clarity. Her HabaÒera fully
exploited the teasing slides of Bizet’s chromaticism but it’s a pity that
Davies doesn’t really acknowledge that this is both song and
dance: the physicality of the song expressed through its vamping rhythm and
extravagant leaps and descents of register was largely absent. During the
‘Seguidilla’, Carmen remained squarely seated on the ground, her hands
tightly bound, though Verrez was able to communicate the physical
slipperiness implied with her voice. At Lillas Pastia’s tavern, Carmen
offers to dance for JosÈ alone, but then spends most of the song lounging
on an ugly plastic chair; two dancers are called upon to express the
implied physical dynamics and impulses.

Such numbers are also ‘performances’: we are not sure, when she sings these
‘popular songs’ whether Carmen is expressing herself or adopting a
theatrical persona. Here, Carmen’s songs were not placed ‘in the spotlight’
in this way; even the impact of her first entrance, which is such a
disruptive dramatic force, was diminished as she meandered through the
crowd of girls and soldiers. Despite this, Verrez held our attention and
enchanted our ears throughout; tattooed and pony-tailed, sporting first
dull dungarees and trainers, later a backless floral frock accessorised
with red handbag and stilettos, she might have become the generic ‘Essex
girl’ with whom Davies draws parallels. That she did not speaks much for
Verrez’ technical and expressive assurance. 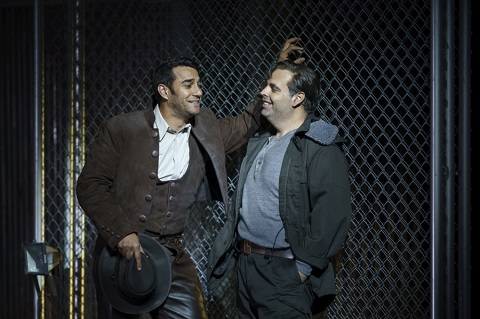 Dimitri Pittas’ JosÈ is more despondent sulk than bewildered naÔf, but
Pittas has the range and power for the part. The mummy’s-boy cadet was
fittingly melancholy and troubled, and, by Act 4, credibly deranged by love
and impotence as he prowled within the crowd outside the bull-ring arena.
Initially, I thought I detected an edgy grain to Pittas’ tenor, when it was
pushed high or loud, and the ‘Flower Song’ didn’t really intoxicate with
its melodic flights of fancy; but, his tenor increasingly found a finer,
warmer focus and, by the climactic duet, rang with dramatic intensity.

Anita Watson was a surprising forthright MicaÎla, and it worked: this
MicaÎla was much more than a one-dimensional ‘good girl’ – the foil to
Carmen, introduced into the opera to satisfy Bizet’s bourgeois audience.
She was not intimidated by the groping eyes of the soldiers in Act 1,
making her utterances more integrated into the dramatic tension than is
sometimes the case. And, during her Act 3 air, time seemed to stand still:
Watson conveyed MicaÎla’s quiet heroism most impressively. This was a
moment of serenity amid the prevailing moral chaos. Phillip Rhodes’
Escamillo wore the toreador’s leather trousers and blouson with style and
displayed the sort of vocal and physical appeal that made Carmen’s
attraction persuasive – though, again, he had to fight his way to
centre-stage through the revellers at Lillas Pastia’s. 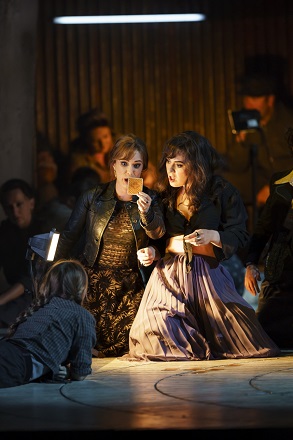 The secondary roles were strongly characterised and sung, which served to
create an impression of a ‘real’ community. Frasquita (Harriet Eyley) and
MercÈdËs (Angela Simkin) were fully involved in the drama, sang with
vibrancy, and were also clearly distinguished characters. The reading of
the cards was a striking moment, no mere divertissement for smugglers and
gypsies with time on their hands. Both her companions’ care for Carmen, and
the veracity of the danger embracing her, were powerfully communicated.
“Death, I saw it, him first, me next, for both of us, death,” Carmen sings,
darkly and slowly. It seemed to me that here, perhaps, was a way to answer
the #MeToo questions Davies’ purports to pose: fated to die, she may still
control when and where? Might not Carmen’s final declaration, “I know that
you are going to kill me; but whether I live or die, no, no, I shall not
give in to you!” and her command, “All right, stab me then, or let me
pass!”, be dramatized as a choice? After all, she sings, “Free she was born
and free she will die!”

Henry Waddington really grabbed one’s attention as Zuniga, while Ross
Ramgobin’s MoralËs was a strong dramatic presence in the opening Act.
Benjamin Bevan (Dancaire), Joe Roche (Remendado) and Gregory A Smith (in
the spoken role of Lillas Pastia) enlivened the bandit scenes. The
children’s chorus were superb, raised on the tenement balconies, firing
water-pistols at the marching soldiers, and the Chorus of WNO sang, and
moved, persuasively. Tom·ö Hanus drew some fire and spirit from the WNO
Orchestra, balancing the exoticism with a warm Romantic glow.

This was a highly enjoyable evening. No ‘concept’ was needed – or, indeed,
really evident: singers and musicians simply let Carmen’s songs ‘speak’ for
themselves.