This seventh revival of David McVicar’s Die
Zauberflˆte, first shown in 2003 and now rebooted by B·rbara Lluch, is no less gloomy
or plausible in its narrative. Thankfully, its exploration of Enlightenment
values, and its narratives of morality and power, are all given a light
dusting and freemasonry is all but erased in this dark and occasionally enchanting production.

The glowing orbs carried
through the stalls at the start of the Overture signal where we’re heading,
not necessarily plot-wise but more by suggestion in terms of emotional
trajectory. Ancient superstitions are abandoned for reason and a
partnership of equals emerges after several testing ordeals for Tamino and
Pamina whose joyful union is ultimately celebrated. Sounds cosy,
but notions of power and equality propounded by Mozart’s librettist Emanuel
Schikaneder are merely ideals, and in that sense, we’ve not come very far
since Viennese audiences first heard this musical fairy-tale in 1791. 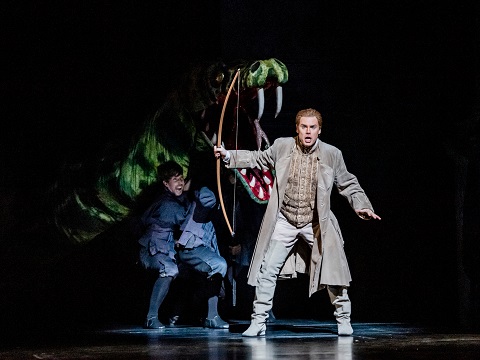 The work’s underlining solemnity is balanced by gentle humour, generated
not so much by the accoutrements of popular theatre presented here – a
wriggling serpent, the rubber chicken or the air-borne bicycle – but by the
characters themselves, principally the comic exchanges between Vito
Priante’s engaging Papageno and Elsa Dreisig’s spirited Pamina. Their
partnership is more convincing than any other on stage and enjoys a special
camaraderie nowhere more obviously than in the companionable duet ‘Bei M‰nnern, welche Liebe’ – sung with effortless musicality and
glorious tone and connected by a real chemistry – a bond that, had he been
a tenor, Priante and Dreisig would have made a believable married
couple-to-be. Benjamin Hulett’s ringing Tamino is fervently and cleanly
delivered: a strong wholesome and safe-as-houses tenor arrives in ‘Wie
stark ist’, but the unvarying nobility of stance and textbook movements
never quite draw the eye. Tamino’s betrothal to Pamina is a plot
convenience, but here manages to look more manufactured than usual simply
because the rapport is missing and it’s not just Mozart’s fault.

The composer conceived the work for a theatre in a Viennese suburb for a
popular audience used to family entertainment. That he elevated this
Singspiel to more lofty dimensions isn’t an issue here, more the absence of
any sense of wide-eyed wonder in a shadowy production that stems as much
from the drab colours (even the wild animals look anaemic) as the
unimaginative direction, and where singers at times are almost overwhelmed
by the sheer enormity of the surrounding marble columns. These crowd the
stage to oppressive effect and merely highlight the post-war pallor of the
costumes. Spectacle is there, of course, such as the giant moon and sun,
but it needs more than a lick of paint to liven up proceedings within
these, often empty, cavernous spaces. 18th-century frock coats,
pretty dresses and a shabby suit for a mallard-wearing Papageno don’t quite
remind us that this opera shares elements with pantomime. 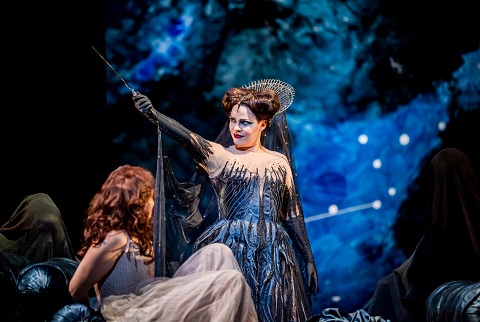 Niggles aside, I enjoyed the absence of distracting movement during many of
the set pieces, allowing key arias and ensemble numbers to register fully,
to speak for themselves as it were. Particularly memorable was the
wonderful Act Two Terzett ‘Soll ich dich’, beautifully rendered, buoyant
and sung with flawless ensemble and genuine affection – a standout moment
of pure bliss. Elsewhere, the trio of Ladies (Kiandra Howarth, Hongni Wu
and Nadine Weissmann) eventually found an accommodation in their ensembles,
a quality brought off with great assurance by the three boys Richard Wolfson, Joshua Abrams and William James who made the most of
their cameo roles.

There is plenty of drama from the Finnish soprano Tuuli Takala as an admirable Queen of the Night. Her arias
blazed with conviction and brought sustained applause for her efforts.
Equally impressive, and at the other end of the stave, is the commanding
presence and amply upholstered bass of Andres Bauer Kanabas as Sarastro.
His shapely ‘O Isis und Osiris’ was especially gratifying. So, too, was the
clarion and insinuating tone from Rodell Rosel as a foppish Monostatos –
less a repellent monster than someone to be ridiculed. It was curious to
see Papagena dressed as a woman belonging to the oldest profession, but
Chilean soprano Yaritza VÈliz fulfilled her portrayal with ease.

Leo Hussain directs the Royal Opera House Orchestra with flair, bringing
flexible and generally forward tempi. Despite the odd disagreement between
pit and stage the opening night was a musically persuasive evening and will
sharpen up in time.