the previous evening at Birmingham’s Hippodrome, came this Welsh National
Opera revival of James Macdonald’s 2002 production of Rigoletto,
which transfers the action from an immoral court in Renaissance Mantua to
modern-day corridors of power, laying bare the misogyny, abuse and moral
vacuum which underpins contemporary political power and privilege. 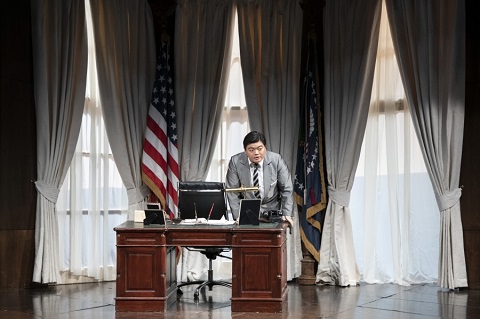 Though the Stars and Stripes stand tall behind the ‘President’s’ desk, the
invitation to draw parallels between past and present is gently proffered,
which is a good thing because if one probes to closely the holes and non
sequiturs come into view. What is a court jester doing in the Oval Office?
How does one explain society’s permittance of Gilda’s incarceration by her
controlling father? And, we might believe that in the Renaissance a dutiful
daughter, whose life has been a sequestered one, might not recognise her
father’s employer, the local Lord, but would she really be so
media-innocent in the late twentieth century and fail to spot the President
– even if his old college scarf does serve as a ‘disguise’?

Most problematic of all is the opera’s central dynamic force (and original
title): Monterone’s curse. It might be possible to interpret ‘la
maledizione’ figuratively: a foretelling of the individual suffering that
inevitably results from a corrupt patriarchal system? But, that’s not the
line Macdonald takes. Here, Monterone – a straight-backed, stern Eddie Wade
– is not dragged off to prison for his attack on the Duke’s debauchery but
instead incarcerated in an asylum – an attempt to make sense of non-sense
which doesn’t quite succeed. 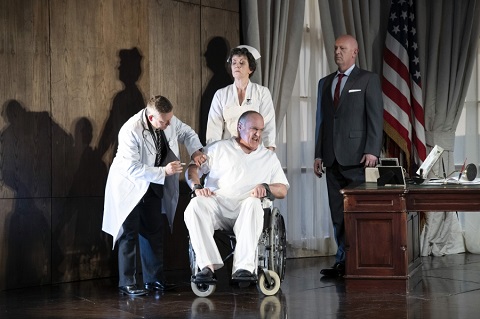 There were other small details that seemed to undermine the ‘realism’. The
iron stairway leading up to Rigoletto’s shabby home is decked with
flowerpots and a pumpkin; yet Gilda, full of the joy of misguided love,
dances up the steps waving a sparkler. Given the timing of this tour,
perhaps revival director Caroline Chaney was hedging her bets on Hallowe’en
or Guy Fawkes Night? Then, when Gilda has been kidnapped, she runs through
the Oval Office wearing a pair of pristine pyjamas, the sleeve of one arm
decorously ‘torn’, not a hair out of place.

But, as always with such minor irritations, they were swept away by some
truly engaging sung performances, as Rigoletto and the Duke battled it out
not only for possession of ‘their girl’ but also for the vocal honours.
Mark S Doss has a big bass-baritone which seems almost to reach out and
grasp the audience, compelling them to share in Rigoletto’s trials and
agonies. His voice can feel a little cumbersome at times, but the American
singer can vary its colour, and its essential weight and fullness also
means that the pianissimos can fade to a wisp and still make a
mark. I found this Rigoletto a little too fond of grimacing, hand-wringing
and head-clutching, as Doss sought to convey the ‘jester’s’ moods as they
modulate between mockery, rage and distress. But, I did feel Rigoletto’s
vulnerability. He cruelly baits Monterone but it’s clear he just wants to
be in the gang – there’s a fine line between the bully and the bullied –
though his checked jacket, as much as his hunchback and limp, mark him as,
unavoidably, an outsider. Moments such as Rigoletto’s desperate scramble up
the stairs, to discover that Gilda has been abducted, and his opening of
the sack to find it contains the body of his daughter, were powerfully
emotive.

David Junghoon Kim’s careless, self-regarding Duke remains unaware of such
distress, which arises from his own narcissistic self-indulgences. Since I
first heard him 2016, when he joined the Royal Opera House as a Jette
Parker Young Artist, Junghoon Kim’s seems to have blossomed fulsomely, and
now boasts a rich sheen, varied tonal shades and real strength of line. ‘La
donna e mobile’ was muscular and clear, delivered with a confidence laden
with conceit. Does the Duke really love Gilda? It wasn’t, perhaps never is,
possible to know: perhaps he just thinks he does, for a short moment. 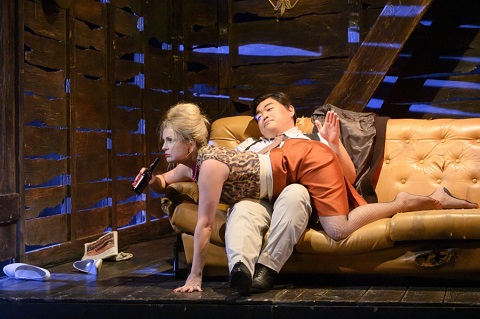 This Gilda certainly loves him, though. Haegee Lee (like Junhgoon Kim, a
former Jette Parker Young and also hailing from Korea) has such a purity of
tone and accuracy of intonation and ornament that one would never for a
moment doubt Gilda’s sincerity. When I heard Lee sing ‘Caro nome’ during
this year’s

, I was tremendously impressed, praising ‘a measured and confidently
crafted performance which communicated character and feeling most
impressively’. Here, while no less struck by Lee’s vocal precision and
care, I found her dramatic embodiment of the role less convincing: too much
wide-eyed wonder and ingÈnue stargazing for my liking. 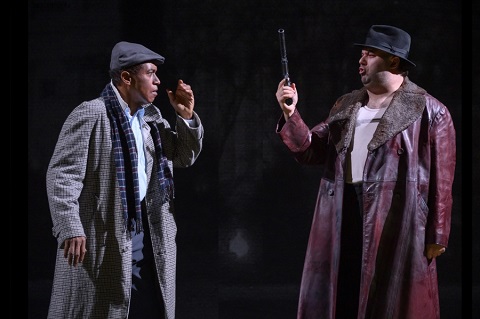 James Platt was a frightening Sparafucile, lingering menacingly in the
shadows, his Hadean voice shimmering with hatred (and evidencing none of
the ‘wobble’ that has sometimes been evident of late). The Act 3 quartet
was a dramatic and musical highlight, Emma Carrington’s Maddelena
descending from atop the tawdry inn to seduce a Duke she seemed to truly
love, just as blindly as Gilda.

Conductor Alexander Joel led a thoughtful performance in the pit, one
skilfully paced and readily ratcheting up the tension as required. It was a
pity, therefore, that having churned up an emotional maelstrom in the first
scene, a technical hitch (one presumes?) during the scene change resulted
in a long hiatus before the action resumed, undoing Joel’s good work as the
audience relaxed, chatted and fidgeted.

Rigoletto
has always been ‘political’. Its ‘predecessor’, Victor Hugo’s carefully
researched study of ‘Francis I’, fooled no one and Hugo’s thinly disguised
criticism of King Louis-Philippe led to his play being banned after one
performance, not to be seen in France for 50 years. Verdi’s censors allowed
him and Piave, his librettist, to set the play only if the action was
transferred from France to Mantua, Francis I becoming a Gonzaga duke in a
royal court that was no longer in existence, and as such unlikely to either
offend or incite. In his renowned ‘mafioso’ staging for ENO, Jonathan
Miller exploited this innate political core to the full. The corruption of
high office; the ethical vacuity of the ruling classes; power maintained by
misogyny, abuse and violence: plus Áa change. Le roi s’amuse indeed.

That said, the perspective that Macdonald encourages us to adopt – like Jo
Davies’ #MeToo sightline the previous evening – seemed ultimately
irrelevant to the listening theatre-goer’s experience and pleasure.
Together these two engaging and enjoyable WNO productions suggest that it’s
the music and the singing that hold the balance of operatic power after
all.