In the opening scene of Graham Vick’s 2017 production of Britten’s Death in
Venice for Deutsche Oper, Gustav von Aschenbach finds himself at his own
funeral.

An oversize black and gilt funerary frame projects a monochrome photograph
of Thomas Mann, whose visage gazes out across a chorus of mourners, their
sombre black tempered only by a round wreath of white lilies. This wreath will transform itself into Tadzio’s laurel crown, when he is victorious in
the Games of Apollo; then, a gaudy necklace linking the duetting Players –
“O mio carino, how I need you near me”; and, subsequently, the barber’s
mirror, dexterously angled for Aschenbach to admire his youthful new
coiffure. When the increasingly deluded – in this production almost
deranged – Aschenbach thrusts his head through the scented circle, it seems
to become a noose, foreshadowing his demise. 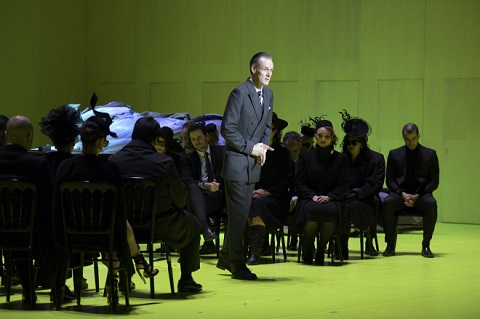 Much within Stuart Nunn’s single set – a lime-green box, with entrance-exit
doors left and right, and lit with lurid tints of yellow and purple by
Wolfgang Gˆbbel – is similarly protean. Black chairs serve as gondolas and
children’s playthings, just as Britten’s Elderly Fop reappears as the
Gondolier, who becomes the Hotel Manager, who shape-shifts into the Leader
of the Players. The seventeen scenes of the opera ebb and flow like the
tide on the Lido beach. Yet, there is scant visible representation of the
waters on which the city is built: the water which is the source of both
the city’s beauty and its decay. Instead, an outsized cluster of
violet-hued tulips, their petal-edges curling and blackening, lie stricken.
They later serve as the sickness-laden strand of the Lido; their canker is
the city’s corrupting cholera.

As the aging, angst-ridden Aschenbach, Ian Bostridge might have wandered in
from a Schubert lied, an impression deepened by the presence of the
on-stage piano: a wanderer, an outcast, this Aschenbach was a liminal
figure, singing from elsewhere, the ‘other side’, trapped within the story
– dream or actuality, who knows? – of his own death. And, with
characteristic and potent performative immersion, Bostridge coloured the
text, ‘bent’ the melodic lines, surged, sometimes snarled, through the
increasingly emotive utterances of delusion, desolation and defeat. He
swayed and staggered, leaned back and curved forward; he reclined against
and then climbed onto the piano. Yet, while at times almost overcome by his
awareness of loss of dignity and unalleviated despair, in the recitatives
Bostridge’s Aschenbach stood erect and sang with vocal pristineness and
clarity of thought – even if it was the lucidity of a deluded mind in
self-denial. At such times, Bostridge moved to the fore of the stage and
sang directly to us. His stare was unwavering, unnerving, as if Aschenbach
was facing his own image in a mirror which would brook no dishonesty. 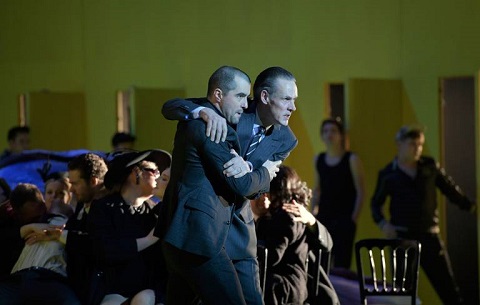 There is little communication, in either Mann’s novella or Myfanwy Piper’s
libretto, between Aschenbach and the other characters, but here the
distancing of the protagonist seemed even more pained and severe than is
customary. Frequently his fellow tourists would turn their backs on the
writer and gaze seawards; when the barber came to refresh his client’s
‘youthfulness’, Aschenbach stood behind, regarding the cosmetic mime with
hubristic pleasure.

Bostridge made Aschenbach’s mental and moral disintegration evident from
the very start. His proud pronouncement, “I, Aschenbach, famous as a
master-writer, successful honoured, self-discipline”, was less an assertive
self-definition, and more an angry riposte. He clutched the strange
Traveller when he sang of the South, and of the “terror” in the bamboo
grove – “a sudden predatory gleam, the crouching tiger’s eyes”; he allowed
the Gondolier to stroke his hair and shoulders, as his fellow travellers’
gentle sway intimated both the rocking waves and the gesture of caress. 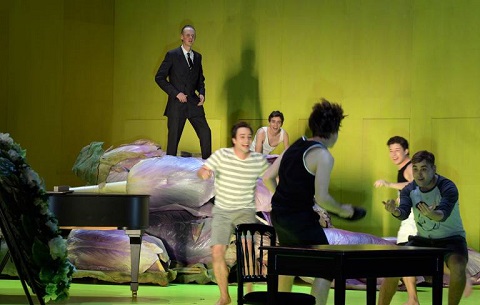 Taking off his shoes and socks, rolling up his elegant trousers, Aschenbach
strolls along the poisonous promenade; when the strawberry-seller appears
atop the tulip mound to extol her wares, Aschenbach gorges on the red
fruit. The children’s games turn spiteful: they steal the writer’s shoes
and toss them back and forth like a beach ball. The young playmates’
movements blend stylisation and naturalism: Rauand Taleb’s Tadzio is lithe
and strong, his lofted body thrown and caught by his friends, his
victorious form hoisted heavenward. Having calmed himself, accepting that
his vocation demands that he must “dedicate [his] days to the sun, and
Apollo himself”, Aschenbach settles down to observe the physical embodiment
of his revered Hellenic beauty, only to be confronted with the children’s
taunting game of ‘pyramid building’, their splayed limbs dangling
erotically across the tulips, deepening the petals’ purple bruises. 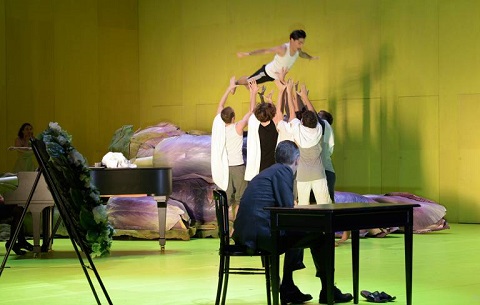 Apollo – a potently penetrating Tai Oney – may shine a light, from a
cameo-light camera, to illuminate Aschenbach’s way but it is too late: he
is lost … in a moral maze whose minotaur is Eros. It is not clear in this
production what is remembered or what is real. Tadzio (Rauand Taleb) does
not seem to see Aschenbach, but the latter is provoked by an imagined or
intimated smile. After the Players’ grotesqueries, Tadzio seats himself
under Aschenbach’s desk, and the writer imagines a communion of like minds:
“Ah, little Tadzi˘, we do not laugh like the others. Does your innocence
keep you aloof, or do you look to me for guidance?” Bostridge made the
end-of-Act 1 declaration, “I love you”, strikingly assertive: there was a
sense of release, then a brief hint of brazenness, and then a look of
horror: what had been acknowledged could not be unsaid, nor the
consequences evaded. 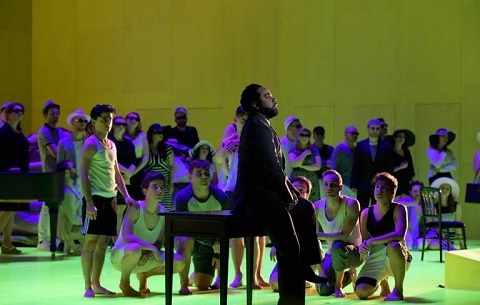 When the curtain rises on Act 2, a viciously scrawled “Achtung” shrieks its
warning from the rear wall, its dripping ink as viscous as the city’s black
waters. Wolfgang Gˆbbel’s lighting casts a surreal sheen on the Dantesque
figures who haunt the hinterland, grimacing and lurching as they fall prey
to city’s choleric clutches. And, as Aschenbach obsessively follows Tadzio
and his family through the city, both the indignity and recklessness of his
pursuit are embodied by the cesspit of writhing bodies – the lapping water
– at his feet.

During the Dream sequence, Dionysus (Seth Carico) removes his shirt and
squares his shoulders at the besuited Apollo, before a nightmarish dervish
ensues, worthy of the Hieronymus Bosch allegories that I had found so
disturbing in the Gem‰ldegalerie earlier that afternoon. And, there is much
chest-baring in this production. Tadzio and his young friends posture and
pounce with a boisterousness verging on, and spilling over into,
aggression, as Tadzio is baited and doused with water. Similarly, on the
boat to Venice, Aschenbach’s fellow travellers break out in vulgar songs
which here seemed to have a repressed violence in their rhythmic energy,
equal to the mutinous dynamism of the shanties in Billy Budd. 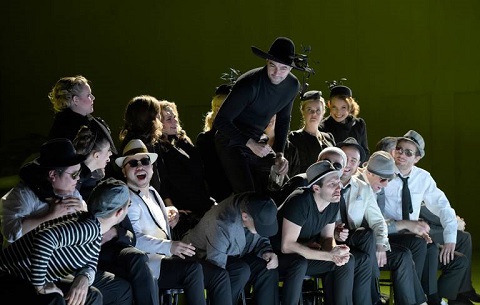 As the eerie composite figure who haunts Aschenbach, Seth Carico’s voice
was as mutable as his costume was candidly uniform: black, with merely the
occasional addition of a camp feather boa or hat to distinguish his
incarnations. Vocally, Carico was a disturbingly elusive Traveller; then,
as the repulsive Elderly Fop, he exhibited a silken baritone which flipped
upwards with startling slickness to a falsetto both astonishing and
atrocious. After the lively duplicity of the Barber and the firm,
forthrightness of the Hotel Manager, Carico’s Leader of the Players was
lewd and bellicose – discomfortingly so as he held up a titillated
customer’s chin lasciviously, leeringly, before delivering a cruel slap to
the proffered cheek. Another pitiful onlooker had his shoes removed and his
feet crammed into stilettos – a reminder of the bare-footed Aschenbach’s
humiliation, perhaps – and his neck wreathed in the Leader’s glitzy feather
boa. As he stumbled drunkenly to the lurching rhythms of the ghastly song,
“How ridiculous you are!”, the troupe’s drum-beat “Ha!”s seemed literally
to flagellate and shame. 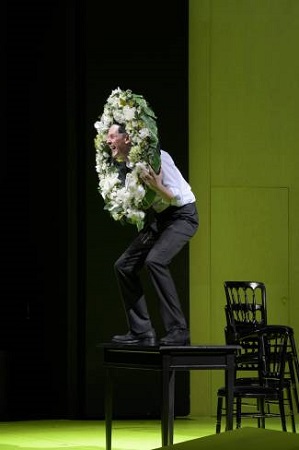 Although Death in Venice is essentially a one-man show, Britten asks for a
large cast and here those taking the smaller roles were excellent. Samuel
Dale Johnson was particularly impressive as the English Clerk, piling up
chairs agitatedly as he revealed, with an anxious tinge and good
projection, the malignity which would menace Aschenbach should he stay in
Venice. As the provocative Strawberry Seller soprano Alexandra Hutton’s
sales pitch had a freshness that her fruit certainly did not share. Andrew
Dickinson was accomplished as the Hotel Porter.

Conductor Markus Stenz drew some surprisingly dark colours from the
Orchestra of Deutsche Oper. Usually the elements of Britten’s score which
strike me most are the flashes of colour and brightness from harp,
glockenspiel, vibraphone, bells, xylophone; on this occasion, I was sucked
into the oily blackness of bassoon, bass clarinet, low strings, trombones
and tuba: just right for Vick’s scheme of things.

The production and performance had many merits, but this was, inevitably,
Ian Bostridge’s evening. Having been so moved by Mark Padmore’s performance
in

, I feel very fortunate to have heard two of the greatest English tenors of
recent years perform this role in two very different productions, just a
couple of weeks apart. 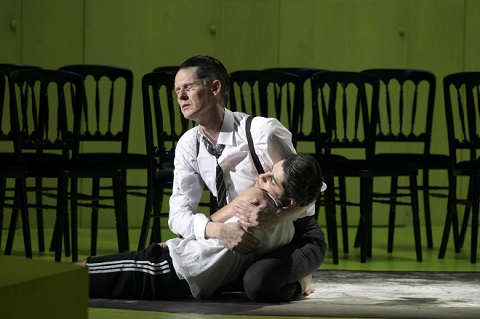 Towards the close, there was an intimation that Aschenbach had found some
peace: “Does beauty lead to wisdom, Phaedrus?/ Yes, but through the
senses./ Can poets take this way then/ For senses lead to passion
Phaedrus?/ Passion leads to knowledge/ Knowledge to forgiveness/ To
compassion with the abyss.” Bostridge delivered such contemplations with
the sweet softness of the gentlest lied: clear, tender, true. But, this
moment of purity was followed by a terrible irony and bitterness. The
latent violence finally broke through the barriers of social restraint. The
flickering rivalry between Tadzio and his friend Jaschiu (Anthony Paul)
caught fire, and the ensuing fight left Tadzio lying prone, unmoving, his
limp form far from his former Hellenic statuesque-ness. Aschenbach clasped
the boy in his arms; when the had departed this life, so the writer made
his own last exit.

Some productions subtly intimate that, with his death, Aschenbach has found
inner reconciliation and become one with “the sea, immeasurable,
unorganised, void” in which he has longed “to find rest in perfection”.
Vick’s re-imagining of the close denies the writer, and the audience, any
such consolation. I found myself recalling the reflections (in an essay
‘The Romantic Song’) of Roland Barthes: ‘The lied’s space is affective,
scarcely socialized: sometimes, perhaps, a few friends – those of the
Schubertiades; but its true listening space is, so to speak, the interior
of the head, of my head: listening to it, I sing the lied with myself, for
myself. […] The lied supposes a rigorous interlocution, but one that is
imaginary, imprisoned in my deepest intimacy.’ This Aschenbach seemed so
utterly, terribly alone, inside his own song of death.