There is, however, a sophistication to Glanert’s style which whilst
embracing modernism looks back to the expressionism of Ravel, something
which was amply applied to long stretches of his Requiem for Hieronymus Bosch. Echoes of Verdi were perhaps
unavoidable, the quotes from Wagner’s Tristan less so, but it was
entirely unsurprising from a composer who knows how to write opera.

An analogy with Henze is not entirely misplaced. Henze’s 1968 Das Floﬂ der Medusa – a hybrid of oratorio and Requiem – takes as
its point of reference the painting by GÈricault. Glanert, however, is
perhaps less drawn to a specific painting by Bosch, rather it is the
profundity of the inspiration which this artist left on the composer which
is more significant. But when one listens toRequiem for Hieronymus Bosch, it is the quartet of panels fromVisions of the Hereafter and, specifically, The Seven Deadly Sins and the Four Last Things which strike to the
very central tenet of good and evil, light and darkness, judgment and
purgatory which seem to have been most influential. Where Glanert deviates
from Henze is in how a composer can use art in music. For Henze, Das Floﬂ der Medusa is principally about aligning art to his
politics; for Glanert, it is about conferring a Mass for the Dead on the
artist himself.

Henze and Glanert do share something else in their Requiems, which is the
texts they use to “fill out” their respective works. For Henze this is
Dante’s Divina Comedia; for Glanert it is the medieval Carmina Burana (minus the Orff settings, as it happens). And it is
the juxtaposition of the traditional Latin Mass, the interlacing of this
sacred text between the ‘Songs of Benediktbeuern’ which gives Glanert’s Requiem such unusual tapestry and focus. 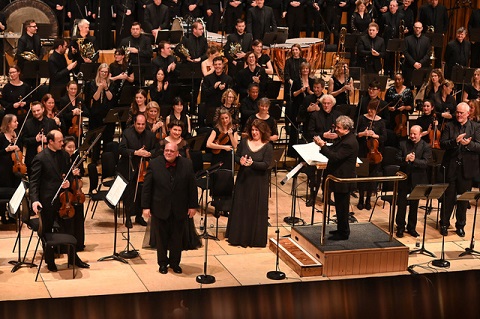 In one sense, Detlev Glanert, by choosing a Requiem celebrating Bosch, has
given himself a formidable task. This is an artist whose mind was
fabulously rich. You look at the wood on which Bosch painted and it is
something which seems to have eyes and ears; centuries before Surrealism,
Bosch’s fractured vision could render something like light as completely
apocalyptic. His depictions of hell were opaque horrors of torment, that
very darkness like a black lava of painted grease. Skies billow smoke;
there is a monstrous, broken-limbed hopelessness to those marching into
purgatory. Demons and sinners are sometimes confusingly yoked together; the
sheer lack of morality in some of his paintings just reiterates the
universality of despair. As Glanert has said, what Bosch gives us is a
medieval viewpoint where “humankind was of little value”.

Not all of this is necessarily apparent in Glanert’s scoring of the work.
The writing for the sins themselves can often seem highly imaginative, even
a little wry. ‘Gluttony’ (given to the solo bass) is managed by making the
orchestra sound plump, and already you can detect Glanert’s debt to Ravel –
though as an orchestrator in Mussorgsky. ‘Wrath’ (tenor), is a turbulent
firestorm, ‘Envy’ (soprano) charms its way entirely towards temptation.
‘Sloth’ (soprano and mezzo) is unambiguously rapturous while only obliquely
reminding us of the sin, and ‘Pride’ (mezzo) has a veneer of vanity albeit
of questionable wrongfulness. ‘Lust’ (tenor and bass) – supplemented by the
male chorus – reverts to the influence of Ravel in its rhythms, and
‘Avarice’ (for full quartet) suggests the universality of a sin to which we
are all predisposed. Each sin is called upon by the Speaker, the archangel
Michael, declaiming at the top of his voice ‘Hieronymus! Hieronymus Bosch!’
(each followed by the name of the demon appropriate to the sin).

Intertwined between these sections of the ‘sins’ is the Latin Mass itself.
The sheer scale – and the subject – of this Requiem in part draws
comparisons with Verdi’s Requiem rather than any other. There is
nothing essentially small, insular or even predominantly religious about
this work – rather, it covets a more secular idiom, something perhaps
closer to the private Lutheran religion of the composer himself. But, if
there are comparisons with Verdi they do exist – as they do with Mahler as
well. As in Verdi, Requiem for Hieronymus Bosch opens in
tranquillity and moves towards the implacability of terror, though both
composers treat this dissemination of orchestral power in the music quite
differently. Verdi’s ‘Dies Irae’ is a towering structure, for example;
Glanert’s is not, though its immensity is probably nearer to some of the
final movement of Mahler’s Sixth. Glanert’s ‘Libera me’ doesn’t hollow out
the feeling we are on the brink of the abyss, that the music is tremulous
with dread – as if shattering chords from the organ don’t project the
terror even more. 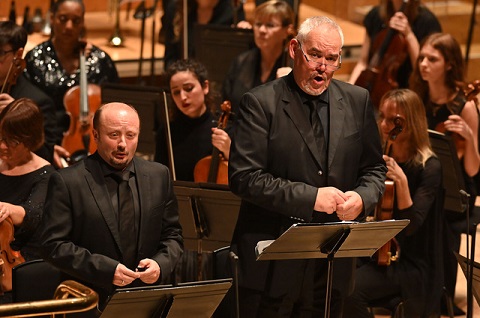 What is unquestionably very fine in this work is the writing for voices –
especially for the four soloists. Common to both Glanert’s Requiem
and Henze’s Das Floﬂ der Medusa, is a spatial arrangement of the
setting that places choirs at different focal points. With Glanert, we have
a larger chorus on stage with the orchestra and a smaller one beside the
organ (from where I was sat this was behind me). Throughout the work, these
choirs merge as if they are echoing one another. Although the soloists
largely sing solo, there are both duets and a quartet.

The performance was exceptional. Although Glanert has not written an
operatic Requiem, it’s entirely clear this composer’s long history of
composing opera has given him the versatility to balance voices against an
orchestra exceptionally well. Even from my slightly too-far to the right
seat, the detail from the soloists was ravishing, and it is in the ‘Deadly
Sins’ where the writing is most full-blooded and coruscating. Albert
Pesendorfer’s bass (heard first to magnificent effect in ‘Gluttony’) was
rock-solid, even when Glanert imposed some quite treacherous lengthening of
phrases. The richness and depth of Pesendorfer’s bass, sometimes charred
around the edges with a blackness or melting into the cello desks, never
wavered. Norbert Ernst’s tenor was equally flexible – and fully able to
negotiate the wrathful tempo which had been set for that very sin. It might
not be a huge voice, but the range of it was impressively wide. Christa
Mayer’s mezzo often sounded unfathomably deep; so much so, it seemed to
create fissures. It was perhaps her sheer steadiness of tone which made her
singing of ‘Pride’ so trenchant, the rhythms sung with a power which was
completely assured. Aga Mikolaj’s soprano ripped through the orchestra and
soared beyond it – a voice whose ‘Envy’ aria might have even tempted us to
the sin itself. When these four soloists sang as a quartet, one realised
how supremely well matched they were – each bringing effortless control to
their vocal line, an individuality of tone colour and a taste of sin which
seemed uncomfortably human and all too relatable. David Wilson-Johnson’s
speaker (Michael) intoned his repeated exclamations before the introduction
of each sin with a terrifyingly powerful projection.

The BBC Singers and BBC Symphony Chorus, with so much to do in setting the
immense drama of this work, were on wonderful form. Whether in prayer-like
solemnity or dramatic confrontation these two choirs worked in a perfect
state of vocal symbiosis. Semyon Bychkov secured gripping playing from the
BBC Symphony Orchestra, though this conductor’s tendency to languish over
phrases here and there sometimes felt at odds with the pacing of the work.
But he secured ravishing playing from the orchestra, especially in the
closing ‘Peccatum’ and ‘In Paradisum’ where the woodwind phrasing was
flawlessly impressionistic.

Before Glanert’s massive Requiem, the evening had opened with
songs written during Hieronymus Bosch’s lifetime. These short pieces, by
Thomas Crecquillon, Pierre de la Rue and Johannes Ockeghem were perfect
miniatures ably dispatched by the BBC Singers, although they shed no light
on either Bosch or Glanert’s Requiem in the slightest. Some might
argue that in the context of Bosch’s art, against the backdrop of a painter
for whom Hell was very much his thing, and even something compelling,
Glanert’s Requiem might fall short. Perhaps it does on that
measure. But as a work about judgment and the journey between heaven and
purgatory it almost succeeds.

This concert is being broadcast on BBC Radio 3 on Tuesday 10th December at
7.30pm and will be available for 30 days.