So take it with a grain of salt when I praise Amahl as the only truly perfect opera. Here the cliché is literally true: one cannot imagine adding or subtracting a single note. Other canonical operas approach such distilled perfection: Mozart’s Così fan tutte, Rossini’s Barbiere di Siviglia, Verdi’s Il trovatore and Falstaff, Puccini’s Gianni Schicchi, and Strauss’s Salome come to mind. Yet even these great works contain a few moments, if not an aria or two, where inspiration flags. Not so Amahl.

From the start, critics have protested that Amahl is flawless only because it is so simple-minded. On the train to the performance, I ran into one of the most experienced and enthusiastic opera-goers I know – someone who has been around long enough to have watched the premiere of the opera’s live premiere on NBC TV almost seventy years ago. He scoffed at my choice of evening entertainment, insisting that he never wants to hear Amahl again. 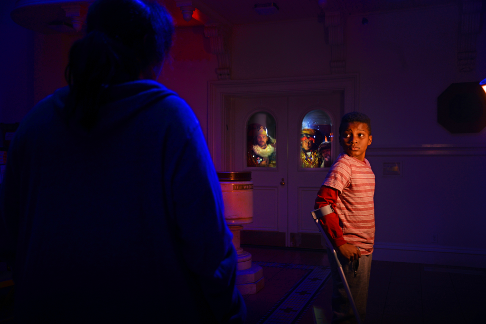 One can understand why. It is a children’s opera based on an unabashedly sentimental Christmas tale concocted by Menotti himself: on their way to Bethlehem, the Three Kings pass by the house of a poor crippled boy, who is miraculously cured and joins their caravan. It was the first made-for-TV opera, which meant the story had to be told in just 45 minutes, so as to leave space for an announcer’s introduction and, in the first years it was broadcast, a commercial for Hallmark Cards. In the heyday of atonality, Menotti’s music was a throwback to the Italian romantic idiom of Puccini, yet with much less complexity. After a brief prelude, the action starts and ends with an oboe ditty in C Major; in between, it deploys diatonic major and minor harmonies (though at times more complex and harmonically ambiguous than they may seem) and conventional folk rhythms, all played by a modest chamber orchestra.

Yet, like all the greatest operas, the music composed for Amahl is onomatopoetic. Elsewhere, Menotti employed dense textures, complex tonalities, and weird orchestral timbres; here, his writing is deliberately naïve and sincere. It underscores the libretto’s central message: life is ultimately about love and generosity, on the model of the family – and in this, the disadvantaged among us deserve special regard. Moreover, as Menotti reminds us in his production notes, the story is told from the perspective of Amahl, an innocent (if mischievous) child. It is he who first sees the kings, defends his mother (when she steals out of love for him), receives the miracle, and departs at the end to thank the baby Jesus himself. Only by watching this do the adults around him learn that Christmas is not, as King Melchior puts it, about the rich giving gold, frankincense, myrrh and other worldly things to someone who “does not need it.” It is about helping those immediately before us. The same conviction inspired Charles Dickens, O. Henry, Hans Christian Anderson, Frank Capra, Dr. Seuss and many other authors of classic holiday tales. 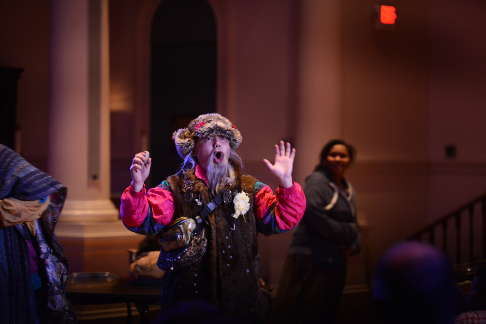 In sixty years, no production of this opera I have attended captures the essence of Amahl better than this revival by On Site Opera. This company has become an essential element in the exciting renaissance of small-scale lyric theater in New York today. Its specialty is “site-specific” opera: immersive performances to small audiences in non-traditional everyday spaces.

Last year this production premiered to great praise. This year it returned to the sanctuary of the 175-year old Church of the Holy Apostles on Ninth Avenue at 28th Street – a lovely space which doubles as the site of the largest feeding program of the Episcopal Church, serving over 1000 meals every weekday lunch. The performance takes place in the middle of the church sanctuary, with the audience all around.

Menotti set the opera in a shepherd’s hut two millennia ago, which he imagined to be much like the rural Italy of his youth. This production transports the action to the present and to an urban setting – just like that immediately outside the church. Amahl becomes a poor kid who plays with plastic superhero toys, his mother a tired single parent. The three kings are eccentrically dressed street people schlepping their possessions around in shopping carts. It remains deliberately unclear whether they perceive the same reality others do – and whether their quest to honor the newborn Jesus is real or delusional. Most in the cast are people of color, and the chorus and dancers are comprised of performers who have experienced homelessness at one time or another. 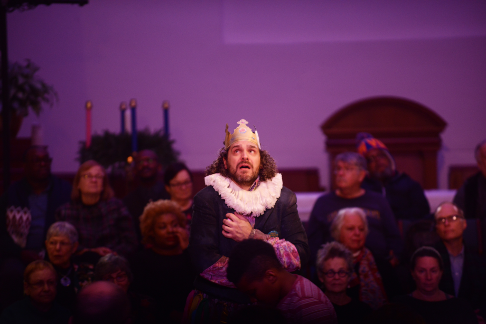 For a modern urban audience, this approach renders the relevance of the opera’s central point obvious and amplifies the opera’s dramatic intensity. One example must suffice. A high point of the opera occurs when Amahl’s Mother, thinking of stealing some of the kings’ gold to help her child, sings:

I wonder if rich people know

what to do with their gold?
Do they know how a child could be fed?

No one can miss the point when she addresses these yearning vocal lines to a largely white, well-educated and wealthy Manhattan audience sitting just a few feet away.

One of the strong points of On Site Opera is its ability to find singers with the technical facility and dramatic immediacy to deliver such lines in such intimate setting. Here they succeeded brilliantly. All were believable in an immersive setting. As Amahl’s Mother, the young Viriginian soprano Aundi Marie Moore sang with warmth and soared passionately above the ensemble when needed. Boy soprano Devin Zamir Coleman, a multi-talented sixth grader from Harlem with diverse film, vocal and instrumental credits, sang with remarkable intonation and power. Joshua Jerimiah, Musa Ngqungwana and Julius Ahn – who have collectively sung on the stages of many of America’s major opera houses – comprised a sonorous trio of kings. Jonathan R. Green appeared as their servant (here a security guard), singing with an appropriately harsh edge.

One could raise technical quibbles. Moore struggled with some low-lying phrases. A sweeter timbre and more attention to rhythmic cadence of parlando phrases, which Menotti notated precisely and early performances under his direction observe strictly, might have better conveyed Amahl’s combination of insouciance and innocence. The orchestral playing and choral singing was more boisterous than tender. Whether due to first night jitters or challenging acoustics unsuited to a studio opera, moreover, the performers were not always together and some balances confusing. (The kings, for example, got softer as they neared Amahl’s house.) The chorus struggled to render some passages cleanly (not least the final fugal section), while the dancers were more exuberant than skilled.

None of this really matters. For those who attended, the sincerity and power of Menotti’s music and message, conveyed in a uniquely modern setting, transcended any technical limitations. I tried hard and failed to resist tears, as did dozens of other similarly entranced spectators around me. This unique production deserves to be revived as a permanent part of New York’s holiday season.