I don’t think what Opera Undone chose to do with Puccini’s Tosca
and La bohËme would appeal in the slightest to purists, but on its
own terms it was highly imaginative – and not particularly beyond the
parameters of some staged productions we might see today at ENO, Salzburg
or even Bayreuth.

Where Opera Undone differs is in the concentration of the libretto to an
hour in length for each opera, a translation into vernacular English which
bears almost no resemblance to the Italian original and in themes which
evoke periods in time which are centuries beyond Puccini’s settings. The
staging of each opera is so minimalist we could really be anywhere rather
than somewhere in particular – it’s almost the Theatre of the Absurd;
Ionescu and Beckett, or even Genet, colliding with Puccini. Tosca
is probably the less controversial of the two productions here; La bohËme is absolutely controversial – and, it should be said,
one of the funniest, yet undoubtedly tragic, performances of an opera I
have seen.

La bohËme
, according to Opera Undone, is about polyamory, homosexuality, cruising
for picks-ups on gay chatlines, sexual identity, HIV, drug addiction and
co-dependency. In one sense I was interested in seeing this production
because it was set in Peckham, a part of south London a few miles from the
very leafy part of the city in which I live. It would have been easy to
stereotype, and, in a sense, this is rather what happened. Marcello (here
called Marcus) is every inch the typical Peckham, white, working-class guy
– right down to the leather jacket, and silver chains around his neck and
wrists. Musetta (Melissa) was even worse. Only Rodolfo (Rod) and Mimi
(Lucas) stand outside the stereotypes (though I do know a lot of gay men
who wear plaid shirts and jeans). But the subjects touched on are
universal, they could have, and do, infect every part of a city. Tosca was simply set in New York; Puccini’s original simply Paris. 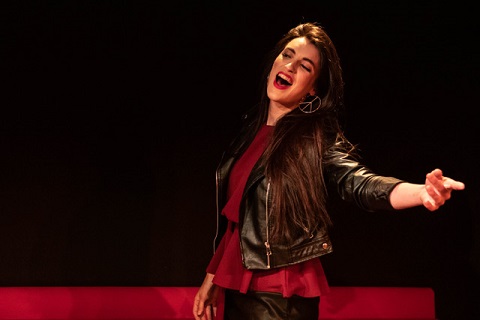 Condensing either opera down to an hour certainly isn’t easy. Tosca was better done, and we got a fairly good slice of the
Scarpia – Tosca scene from Act II here. The focus on both operas was to
maintain the big arias – so we got ‘Recondita armonia’, ‘Vissi d’arte’ and
‘E lucevan le stelle’ (or versions thereof), and the same was the case in La bohËme. Mimi’s lingering death – whether it be from
tuberculosis or from a drug overdose – or whether it is wrought with the
power of emotion or with a foaming mouth is long in whichever version one
sees it. It is no longer a challenge for an audience to see two men kiss on
stage, nor for a libretto to be liberally peppered with “fucks” here and
there.

The humour in both productions could perhaps have seemed misplaced, but it
worked very well. Cavaradossi (abbreviated to Cav) is still an artist,
though should one feel pity for the woman in the audience who spent much of
Act I with a picture frame hanging from her shoulders? La bohËme
was even more striking for involving the audience. Musetta spent an awfully
large part of Act I sitting between people or draping herself over them.
But strip the humour out and there were moments of drama. Cavaradossi
received quite a beating before being hooded and shot; Mimi’s drug induced
death was raw, and certainly done with a sense of reflective realism.

The singing was largely very impressive, though the rather intimate size of
Studio 2 at Trafalgar Studios can magnify, and sometimes strain, the tone
of the voices to a considerable degree. I think all of the soloists deserve
credit for bringing in performances that were very well sung – balancing
pathos and humour with equitability, and acting, that never bordered on the
wooden. Fiona Finsbury’s Tosca was a standout performance, extremely
nuanced, and really quite powerful throughout Act II. The notes are there,
her upper range entirely confident. She had no difficulty suggesting
Tosca’s growing revulsion or despair. The other dominant performance was
the Rodolfo of Roberto Barbaro. I think he started slightly short on confidence,
but the warmth and colour of his voice is beautiful to listen to. One is
entirely persuaded that this is a tenor who emotes what he sings; I could
swear that in his duet with Mimi, where Mimi confesses to his drug use
after their relationship has ended, there were genuine tears in his eyes. 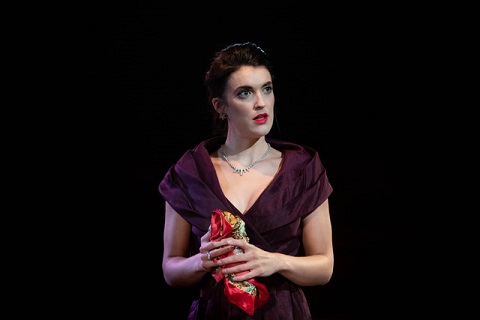 Honey Rouhani’s Musetta was high on humour and high on vocal strength.
Roger Paterson’s Cavaradossi provided a couple of moments during his ‘E
lucevan le stelle’ where his top notes had both more security at the top
and stability in the length of them than I have heard more star name tenors
sing. Hugo Herman Wilson’s Scarpia was never short on power, and neither did
he shirk from imbuing this particular 1940’s mafia version of him with all
his Scarface terror. Michael Georgiou’s Marcelo – he who had voted Tory
just once – bounced between Rodolfo and Musetta with witty confidence.
Philip Lee’s Mimi ended up becoming a heartrending performance that
leant inwards to its inevitable tragedy – the voice clearly capable of
going to extremes. His ‘Si, mi chiamano Mimi’ had brought out a very funny
side to him as he described selling perfume and taking the late shift at
Liberty; and yet, he was entirely moving as he brought an almost positive
happiness to his terminal sleepiness after taking one last hit of drugs.

Entirely outstanding throughout the entire evening was David Eaton’s
playing of the formidably taxing piano parts of Puccini’s scores.

I’m not sure what my expectations were for this particular evening.
Whatever they might have been, purism wasn’t one them. This was in many
ways operatic revisionism, opera as theatre, opera as popular art, opera as
openly accessible. It could be serious and humorous in equal measure and
was an entirely enjoyable way to spend two hours.