Before a note is played, a geisha’s silhouette emerges into the breath-held
silence, etched against a carmine sky. She glides and floats, her fans
fluttering decorously, glinting in the golden sun. As she raises her arms,
her kimono flickers, as transparent as a butterfly’s veined wing. Her obi
trails behind her, a blood-red bridal train. Scooped up by four dancers,
the sash sculpts curving geometries which twist about the geisha,
confining, restraining. When, in the opera’s final moments, Cio-Cio-San
re-enacts her father’s fate, her wedding obi becomes a silk wound, seeping
and swirling, a bloodless emblem of betrayal and transcendence.

seemed an even more intensely piercing colour-feast on this occasion. Han
Feng’s costumes heighten the quasi-theatrical strangeness of the
sense-saturating world in which Pinkerton finds himself seduced. Surfeit is
balanced with simplicity, though: the beige shoji that slide noiselessly,
like sleights of hand; the tendrils of cherry blossom that dangle tender
pink against the black night sky. 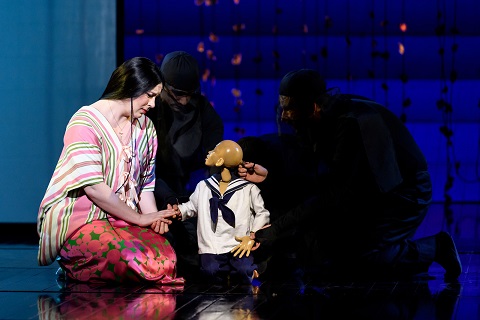 Then, there are the bunraku puppets, brought to life by the conjurer’s
craft of members of Blind Summit Theatre. First time round, I’d found the
puppets too stylised: a representation of the west’s ‘othering’ of the
east. But,

I was won over by the truthfulness of the puppets’ uncanny realism, and
here the mime-dance at the start of Act 2 Scene 2 foreshadowing Butterfly’s
suicide was powerful and troubling. It was hard to believe that young
Sorrow, dressed in a US Navy sailor-suit, rushing in stuttering steps to
grasp his mother, tilting his head quizzically, proffering his hand to the
saddened Sharpless, was not real. 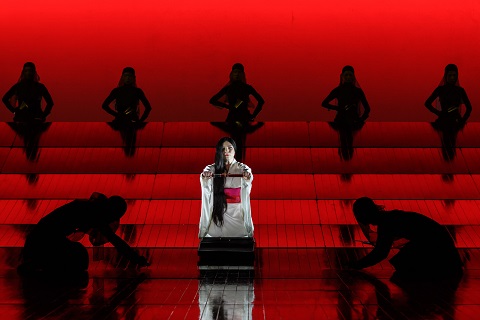 Singing her first Butterfly, Natalya Romaniw made a compelling entrance,
the strong core at the heart of her shining soprano preceding her arrival
at Goro’s marriage-brokering manoeuvres. Perhaps the creamy depths and
heights of Romaniw’s soprano cannot quite capture the innocence of the
fifteen-year-old ingenue, but the Welsh soprano worked hard to convey her
naivety, and of Cio-Cio-San’s honour and pride, feistiness and gentleness,
vivacity and vulnerability, there was no doubt. This Butterfly was bursting
with a passion that she herself could barely know or understand. If I say
that ‘Un bel dÏ vedremo’ brought I tear to my eye, I am not speaking figuratively. And, the ENO
Orchestra, conducted by Martyn Brabbins, contributed greatly to the emotive
power, so exquisite were the pianissimo gestures and textures. I had been
underwhelmed by Brabbins’ approach in Act 1, but here understatement and
delicacy were magically hypnotic, and thereafter there was more fire in the
orchestral belly. 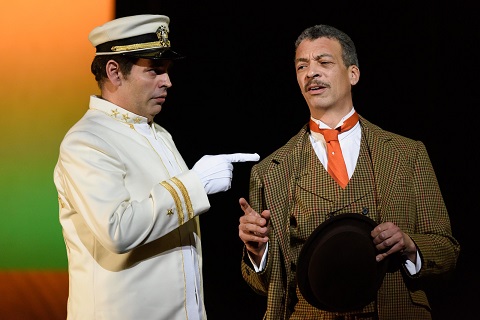 American tenor Dimitri Pittas, making his ENO debut, was a rather clamorous
Pinkerton, struggling at the top and compensating for lyricism with volume.
The effect was to make Pinkerton, at least initially, even more of a
cardboard villain than usual; though, more effectively, it also made the US
interloper even more of a stranger in this foreign land. By Act 3, this
Pinkerton’s uncomprehending bewilderment was more moving than I had
anticipated.

The other members of the cast were accomplished but did not make much of a
mark, excepting Roderick Williams who, as Sharpless, was brow-beaten by
Pittas’ barking in Act 1, but who sculpted a flesh-and-blood figure of
persuasive empathy and sensitivity in Act 2, his lovely soft baritone
infusing his exchanges with Butterfly with humanising kindness. Stephanie
Windsor-Lewis was a reliable Suzuki but did not convey the fierceness of
her loyalty and love for her mistress. Alasdair Elliott’s well-defined tone
and clean enunciation skilfully captured Goro’s contemptuous condescension.
Keel Watson was a thunderous Bonze, Njabulo Madlala a rather wobbly
Yamadori. Katie Stephenson completed the cast as a somewhat tentative Kate
Pinkerton.

This was Romaniw’s night. And, there surely will be many more such nights.

continues in repertory until 17th April.