An assiduous scour through past reviews and You-Tube videos confirms that it has changed very little since it was reviewed for Opera Today at its opening by Andrew Moravcsik .

Curiously, its most detailed and analytical critique appeared in the official journal of jazz Downbeat, when that journal’s Chicago correspondent Howard Mandel reported on the two performances presented by Lyric Opera in its smaller Kimmel Theatre venue.

Or is it curious? Mandel was able to approach the piece from neutral ground, unconstrained by the burdens facing “classical” and “opera” reviewers covering a piece not only outside the standard repertory but outside in subject matter: the life and work of a hugely gifted drug-addicted black jazz improvisor who dreamed about fusing his art with mainstream classical music. 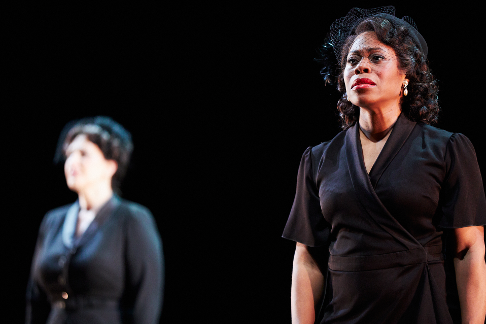 In his Downbeat write-up Mandel acutely analyses the components of composer Daniel Schnyder’s third-streamy amalgam of buried references to works by Parker and other jazz and classical composers, and the way that his busy, buzzy orchestration often blurs and distracts from his angular quasi-tonal vocal lines.

He doesn’t dwell on its effect on the singers and the audience. To penetrate the background instrumental muttering, the performers have to declaim every line, pedestrian or pompous; and since their material is undifferentiated and chanted at the same ponderous pace throughout, it soon ceases to have any particular emotional impact.

The thermostat is set at fraught. Each scenelet blurs into the next as the cast moves from one cafe table to another to denote the passage of time, forward and back. Dead at curtain’s rise, Parker revisits youth, fame, degradation, friendship, romance, only to end up on the same gurney they rolled him in on 90 intermissionless minutes before, while the remaining cast take turns mourning over him and the alto sax he brandishes from time to time but never plays.

The Seattle cast copes well with the material provided. The lights go on and off, the set goes up and down, time passes. The show ends. The compulsory standing ovation ensues. Curtain.

All photos by Philip Newton