Not for Attridge the moral imperatives, psychological ‘proofs’ or
ideological frameworks which some thrust upon Mozart and Da Ponte’s drama
of abstract forces which drive human behaviour, which cannot be denied and
should not be lamented. In an essay which considered the relationship
between CosÏ and Fidelio, Edward Said suggested
that CosÏ ‘refuse[s] the kind of metaphysical, or social, or
cultural significance found readily by [various commentators] in Don Giovanni, Die Zauberflˆte and Le nozze di Figaro’,
and Attridge seems to agree.

“Out of a gothic North” we go “Southward into a sunburnt otherwhere”, said
Auden in his poem ‘Good-Bye To The Mezzogiorno’, “some believing amore/ Is
better down South and much cheaper”. And so Attridge transports us to 1930s
Alexandria, then Egypt’s most cosmopolitan city, a beacon of Mediterranean
culture and a gateway to Europe. That tolerant and inclusive city where the
great, good and glamorous from far and wide – France, Italy, Greece,
England, Armenia – mingled, in their chic bathing costumes, with Egyptian
Jews and Muslims on ‘the sand beaches of Sidi Bishr’, as Lawrence Durrell
described one such fashionable seafront watering-hole in his Alexandria Quartet.

Designer Oliver Townsend and Lighting Designer Mark Howland flood the small
Empire stage with colour and sunlight. The crisp glare of the promenade
where Don Alfonso, a English writer-abroad, lounges to pen his observations
of the interlopers’ amorous antics, gives way to the cool blues and greens
of a Neoclassical terrace. The emerald drapes, cobalt columns, gold
patterned woodwork and hanging lanterns evoke leisured luxury: it’s a
fitting arena for the lovers’ dalliances amid the alabaster statuary and
palm plants.

Alfonso, sporting a white suit and panama, may be as cool in dress and as
in manner, but the lovers are an explosion of colour. Their days are
dedicated to fun and frolics. Indeed, the sunshine seems to have gone to
their heads. Faces are flushed and hearts are febrile when ‘Dr Despina’
arrives to revive the ‘suicidal foreign lovers’, her medical apparatus
producing Mesmer-like magnetic vibrations racier than is customary. The
amused men throw themselves into the fiasco with a physical gusto which is
more than matched by the concerned women. It’s hilarious and swiftly
despatched. Farce at its best. 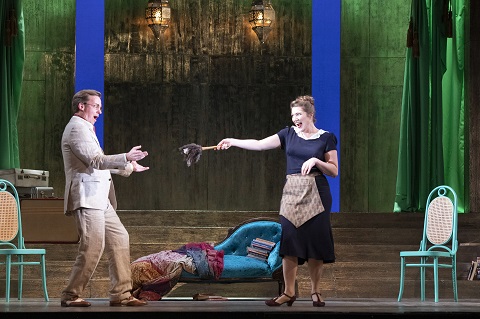 The cast are perfectly attuned to the blithe spirit of Attridge’s
production. Martha Jones’ Dorabella, flamboyantly attired in a glorious
green trouser-dress, grasps her romantic opportunities with relish, and
confesses all in a beautifully sonorous ‘» amore un ladroncello’, looking
and sounding not the least regretful as she reveals her indiscretions to
Fiordiligi. Joanna Marie Skillett is a more demure Fiordiligi, attempting
to defy the amatory sunstroke that afflicts the other lovers, but passion
drives the precision of both ‘Come scoglio’ and ‘Per piet‡’. As she pleads
with herself to resist temptation and moral taint, her sincerity is
undermined by some gentle but pointed horn commentary.

Into Opera’s L’elisir
, and here he was a vocally elegant Ferrando, his diction, like that of all
the cast, excellent – enabling us to enjoy the insinuations, double entendres and wry couplets of Jeremy Sams’ English
translation. Frederick Long sang with a lovely fresh and relaxed tone as
Guglielmo, dashing in his knee-boots and flying suit as he swept Dorabella
to the clouds. 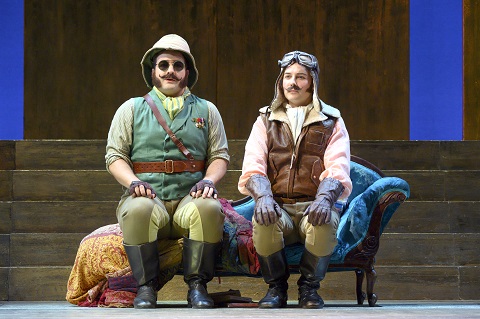 As Despina, Jenny Stafford demonstrated the same comic timing and vocal
grace that have impressed several times at

. Stephan Loges evinced Don Alfonso’s worldly-wise weariness, lounging with
a lazy lethargy which was complemented by the languidly uncoiling smoke of
his cigarette, but his cool cynicism did not deprive the recitatives of
their cutting impact.

There was a sense of caution in some of the ensembles. This is
understandable at the start of a long tour, but was also a result of some
uncertainty, of tempo and tuning, from the Old Street Band in the pit.
Conductor Holly Mathieson got the show on the road with a crisp overture,
but elsewhere a bit more zip and drive was needed.

Lawrence Durrell claimed that in the Alexandria Quartet ‘only the
city is real’. And, that spirit of amoral fantasy imbued this CosÏ
. There was no gravity, no guilt, no emotional shipwrecks. As Despina says,
“Quello ch’Ë stato, Ë stato,/ Scordiamci del passato.” What’s done is done
and the less said the better.

“Wish you were here!” proclaims the picture-postcard front drop. Audiences
around the country certainly will wish they were!