Certainly, Jaho’s intense commitment and emotional empathy with the
characters whom she embodies on stage inspire deep responses among
audiences. When I mentioned to a friend that I was looking forward to
hearing Jaho in the recital room, she commented, “I love her! I’ve never
heard as much crying in the ROH as when we saw her Suor Angelica. Grown men
were sobbing!”

Jaho’s debut recital was a celebration of 50 years of Opera Rara’s
ground-breaking opera-archaeology and of the career of Rosina Storchio, the
Italian soprano (1872-1945) who might be deemed the principal creator of
much of the verismo repertoire that Opera Rara have revived, performed and
recorded during the past five decades. Storchio came to notice in Venice in
1897 when she took part in the first performance of Leoncavallo’s La bohËme – ‘Musette svaria sulla bocca viva’ from this opera was
Jaho’s somewhat tentative opening item here – and the stellar years of her
career began when Storchio sang the title role in the premiËre of the same
composer’s Zaz‡ (at Milan’s Teatro Lirico on 10th November 1900,
conducted by Arturo Toscanini – a role taken by Jaho herself in

at the Barbican Hall.

Verismo might have begun as a French literary movement characterised by
naturalism of expression and realism of subject matter, but in opera the
term came to be seen as a shorthand for dramatic excess and sometimes
violent vocalism. But, it didn’t have to be that way. Storchio herself had
a voice that might be described as lirico-leggero. Grove describes
her soprano as ‘not large, but flexible, pure and sweet’: ‘at the height of
the popularity for verismo opera she personified the lyrical,
refined, gentle school of singing. Her plaintive and fragile Cio-Cio-San
was typical of this approach … [b]ut in other roles, such as Violetta or
Manon, her acute sensitivity led her to depict the characters with
passionate and touching impulsiveness.’

Such words might also describe Jaho herself, and in this programme – a
mixture of excerpts from Storchio’s operatic repertoire and salon pieces
and songs from the period, curated by Roger Parker, Opera Rara’s Artistic
Dramaturg, and music historian Ditlev Rindom – she exploited the lightness
and gentleness of her voice to the full, in particular her ability to make
the longest phrases float tenderly, as if eternal, and then fade delicately
with supreme control to the merest, tantalising whisper. 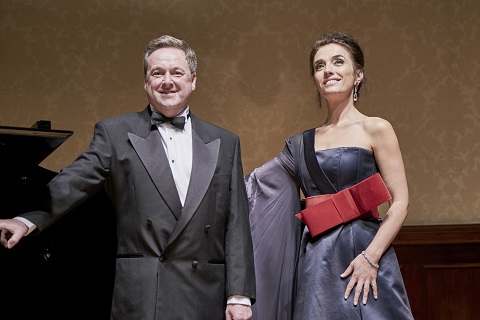 Jaho was at her best in the extracts from opera scenes depicting characters
pushed to emotional extremes. If her diction was less than attentive to the
careful naturalism of the composers’ word-setting, then she more than made
up for this with powerful outbursts of lyric emotion which communicated
with compelling honesty and directness. ‘Mamma? Io non l’ho avuta mai’
perfectly captured Zaz‡’s somewhat languid nonchalance at the start, before
gradually gaining in intensity and colour. In contrast, ‘Un dÏ ero piccina’
from Mascagni’s Iris alternated anxious, breathless stutterings,
gently nudged along by the piano’s steady rhythms, with expansive lyric
moments, as when the young Iris recalls the shocking blood-red sky on a
picture-screen she had seen as a child, depicting a woman being tormented
by enormous octopus, a symbol of sexual violence. Jaho’s soprano was a
surging burst of colour, “Rossi sÏ come sangue,/ D’un rosso livido.”, and
at the close she stood immobilised by horror, her slender arms clasped
across chest, her hands tightly clenched.

Steven Maughan, a member of the Opera Rara ‘family’, was a sensitive and
supportive accompanist throughout the evening, but at such moments one felt
the absence of an orchestral palette to complement the vocal hues with
which Jaho so precisely delineated love and pain, fear and joy. The piano
rumbled threateningly at the close of ‘Pendant un an je fus ta femme’ from
Massenet’s Sapho, but even the Wigmore Hall’s Steinway was no
match for the emotional intensity of Jaho’s impassioned vocal implorations,
“Viens! Viens! Viens! M’ami!”, as Fanny calls upon the lover who has
abandoned her to return and witness her suffering.

‘Son pochi fiori’ from Mascagni’s L’amico Fritz was infused with a
gentle warmth, and sweetness billowed through ‘Nel suo amore’ from
Giordano’s Siberia, in which Storchio took the role of Stephana at
the premiere in Milan on 19th December 1903. The relaxed
declamation of the opening, tenderly supported by the piano, evolved into
sunlit images of love – heavenly light the aroma of spring flowers, and the
diminishment of the soft repetition, “amor, amor!”, at the close was
breath-taking.

Jaho seemed less comfortable in the salon pieces and songs. These comprised
much of the first half of the recital, and perhaps it was a combination of
nerves and excitement – arriving on stage, Jaho looked out at the capacity
audience with a smile, a sigh and a slight shrug of the shoulders – but the
soprano seemed to take a little while to settle in the items which lacked a
distinct dramatic context. There were some slips of intonation, too, which
marred Bellini’s ‘Vaga luna, che inargenti’ and ‘Malinconia, ninfa gentile’
and while the warmth of Jaho’s lower register added poignancy to
Donizetti’s ‘Venne sull’ali ai zeffiri’ – a lament upon the death of
Bellini – the rather wide vibrato employed did not seem entirely
appropriate for Wigmore Hall’s intimacy and fine acoustic.

But, it was good to hear some unfamiliar repertoire. Jaho’s vocal
characterisation in Cilea’s ‘Non ti voglio amar’ was affectionate and
engaging, and the impassioned close to Tosti’s ‘Tristezza’ was compelling,
as the voice floated up an octave all the while fading, and Jaho swooned
onto the piano as if weakened by the knowledge that the heart’s dreams will
inevitably be lost. And, we even had a song by Toscanini, ‘Nevrosi’, which
throbbed with expansive emotions.

Jaho rose to the heights in the very final item, ‘Flammen perdonami’ from
Mascagni’s Lodeletta, a role created by Storchio at the Teatro
Costanzi in Rome on 30th April 1917 with the composer himself
conducting. The libretto is characteristically excessive and improbable,
and the opera has disappeared from the repertory. But, Mascagni knew how to
exploit the voice for emotive and dramatic effect. In this 13-minute death
scene, the 16-year-old Lodoletta, who has been abandoned by her lover, the
Parisian painter Flammen (who comforted her upon the death of her adoptive
father), arrives outside Flammen’s house on a freezing cold New Year’s Eve.
Seeing him dancing with another woman, she mistakenly believes that he has
forgotten her and collapses in the snow. Overcome by delusions that
Flammens is embracing her, she succumbs to frostbite and freezes to death.
Jaho exploited every drop of Mascagni’s hyper-Romantic emotionalism. The
Wigmore Hall audience loved it.

Storchio had been the first Cio-Cio-San, creating the role at La Scala in
1904, and it was the final role that she sang on stage, in Barcelona in
1923. So, ‘Un bel dÏ’ was a fitting encore – the perfect conclusion to a
fine evening.

Ermonela Jaho’s recital disc, Homage to Rosina Storchio
, on which she is accompanied by the Orquestra de la Comunitat
Valenciana conducted by Andrea Battistoni, will be released by Opera
Rara in September 2020.