Though to the vocal splendors of Romeo, 26 year old Russian mezzo-soprano Vasilisa Berzhanskaya, the Giulietta, 34 year old Italian soprano Mariangela Sicilia, and Tebaldo, 27 year old Peruvian tenor Iv·n AyÛn Rivas we may add the splendors of Rome Opera’s excellent orchestra. The harp sang in splendid duet with Giulietta, the clarinet sang gloriously all on its own in an extended bel canto aria without words. Conductor Gatti and his orchestra were much more than accompaniment to the desperately beautiful outpourings of the protagonists, the orchestra penetrating the depths of their feelings in the musical delicacy of pristine Romanticism.
The passions that drive Bellini’s protagonists arise from difficult, usually impossible situations. Juliet of the Capuleti family falls in love with Romeo of the opposing Montecchi family. The resolution is in a most beautiful love duet. Finally Romeo believes Juliet dead, then Juliet knows that Romeo is dead. The resolutions are most beautiful arias.
Meanwhile all attempts at reconciliation of the factions are fruitless in some fine choruses. Poison was the usual Renaissance solution to many problems, and here its effect is far more than Juliet’s death-like sleep. It precipitates the confrontation of Romeo with Tybald (Juliet’s intended) Romeo accusing Tybald of causing Juliet’s death, Tybald accepting the blame. No bloodshed here, the resolution is a most beautiful duet.
Bel canto is by nature virtuoso singing, since that is what bel canto operas are about. Thus bel canto operas on major stages are most often about famous singers. Rome Opera chose instead to use young singers in the early stages of their careers. It was a daring idea, pulled off by very accomplished, surprisingly accomplished young artists, and with the complicity of conductor Gatti. 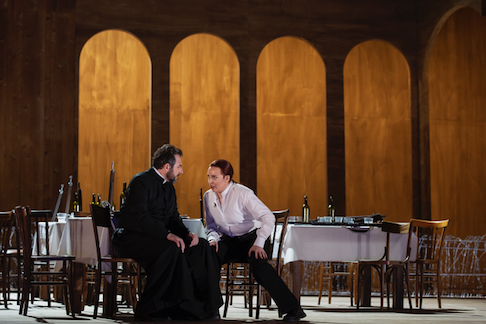 Nicola Ulivieri as Lorenzo, Vasilisa Berzhanskaya as Romeo
Conductor Gatti is known for the major repertory — Parsifal at Bayreuth, Elektra at the Met, Don Carlo at La Scala as examples, yet he found the ephemeral delicacy of this minor Bellini opera, and paternally supported the innocence of his young protagonists in their initiation into bel canto. These were not virtuoso displays of singing, rather there was the sense of these young artists discovering their musical feelings in voices as yet unmarked by established style and personality.
Soprano Mariangela Sicilia was the Teresa in Rome Opera’s 2016 Benvenuto Cellini (Berlioz) where her high notes were remarkable, but I noted some vocal uncertainties. Here there were no uncertainties whatsoever, the high notes still remarkable, more remarkable were the beautiful, extended pianissimos she exploited in her upper voice. Though to this point she has sung the standard light lyric roles there is now no doubt that bel canto is her inevitable destiny.
Mezzo soprano Vasilisa Berzhanskaya is a current protege of the Deutsche Oper Berlin where she has already sung Rosina in Il barbiere di Siviglia. She is a fully finished artist having survived the young artist programs at the Bolshoi, Aix-en-Provence and Pesaro. She possesses the necessary warmth of tone and agility of voice to portray the youthful Rossini roles to perfection, promising with maturity to reach for the heroic mezzo roles. 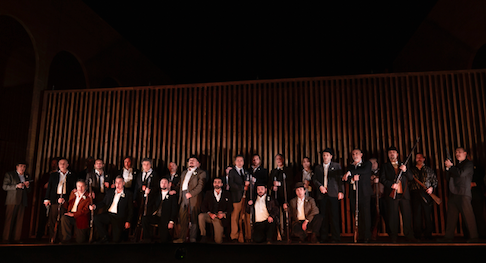 The Capuleti faction with rifles
Tenor Iv·n AyÛn Rivas has profited from training by Juan Diego Florez among other teachers in Peru. He has trained in Italy since 2014 and is in the first moments of his career. Of particular note is the evenness of his tone throughout the light lyric tenor register, and the ease with which he reaches and holds his high notes. As well the young tenor brings charming ingenue energy onto the stage.
Italian baritone Nicola Ulivieri sang Lorenzo, the family physician who imagined the machinations that resulted in the tragic deaths of the young lovers. Mr. Ulivieri has an established career on major stages and brought accomplished singing to this compassionate personage.
The new production was directed, designed and lighted by French/Italian stage director Denis Krief, a long time resident of Rome. His setting was highly abstracted shapes that moved efficiently, costumes were contemporary street dress. His lighting was of some sophistication resulting at times in effective stage pictures, notably the exquisite death tableau. What I found missing was a real context for the sophisticated conducting and the brilliant, youthful singing of this rarely performed opera.
Michael Milenski