If the Ring operas which surround Siegfried are
monumental, or tragic, or in the case of Die Walk¸re even gloomy,
then Siegfried is designed as an heroic comedy. There isn’t really
a distinguishing line which suggests otherwise – scenes of farce abound,
Siegfried encounters obstacles which are edgily comic, there are scenes
where identity is never certain. In another sense it is a simple fairy tale
– a story about a boy who could not learn to fear intertwined with the
mythological stories of his youth and birth.

Siegfried is the only character who can really be said to make a journey
through the opera and it takes a singer of some stature to convince us that
happens. Unfortunately, Torsten Kerl wasn’t the man for it. There is only
so much slouching in chairs, hands in pockets, eyes screwing like pinballs,
and flaying of arms one can take – at the level we got it here, it did
little to convey the rowdiness of the early Siegfried. Even in Act III
where he should be moving into something more nuanced, Kerl seemed
unwilling to deviate from his earlier youth. His threats to Wotan missed by
a country mile, and “Das ist Kein Mann!” – that singular moment of great
epiphany for Siegfried – remained an illusion, a journey incomplete. Kerl
may have reached the summit of the mountain, and passed through the circle
of fire to awaken Br¸nnhilde – and achieved the last of his physical tests
– but this was a Siegfried who couldn’t exactly give us the shock or terror
– that learning of fear – which allowed him to awaken her and pledge his
love.

If Kerl’s Siegfried is shallow on depth, it would be unfair to suggest the
comedy isn’t there at all. His misfortune, however, was to have a Mime in
Adrian Thompson. I’m not sure I have seen any singer in a concert
performance bring such energy and sheer range to the character he is
portraying. Thompson’s skill isn’t to make us entirely forget that Mime is
fundamentally evil – though perhaps, we got rather more deviousness than
outright evil on this occasion. Thompson doesn’t exactly skimp on the
comedic elements of Mime, however. His constant whinging that he cannot
forge a new sword from the smashed fragments of Notung, his howls tempered
with groans are all emphasised. Unlike Kerl’s Siegfried who really doesn’t
act any of his comedy, Thompson simply revels in his. The danger with Mime
is that one risks us having sympathy for him and with Thompson it was
difficult not to do this. There was indeed something tragic, although it’s
highly comic too, when Mime transforms himself from failed forger into a
cook simply frying eggs. What was also so notable about Thompson’s Mime was
the quality of the singing. Here we had a tenor with clarion high notes and
a solid bottom register – a remarkably complete performance of the role.

The mystery of Siegfried is that its comedy masks a much darker
side. The balance between Mime’s humour and his true motives and
insidiousness is a thin one. Possessed by greed for the Ring, and his
deceit of Siegfried whom he has plotted to poison after he has killed
Fafner, it identifies him as a pantomime villain. It is something which
Adrian Thompson was able to beautifully master. Wotan, on the other hand,
is disguised as the Wanderer but given a crooked hat and an eye-patch to
add to his comedy, when this is largely unnatural for him. Evgeny Nikitin
was imposing in the role, a bass of majestic sweep and tone. His Act II
‘Riddle Scene’ with Mime was thrilling, lacking none of the narrator’s
theatricality which this scene often does. His renunciation in Act III had
overtones of tragedy and in his scene with Erda, Nitikin managed to sway us
into believing he was simply wiser. I’m a little unsure why the audience
seemed rather cool towards his performance – in many respects Nitikin
brought a fascination and complexity to the role. The ‘Riddle Scene’ – as
well as being beautifully sung – managed to combine the contradictions of
omnipotence and ordinariness with considerable deftness. Mime’s questions –
which are largely unknowable – trick the dwarf into a failure of
recognition. One could see the comic side of this, but both Thompson and
Nitikin layered it with effective skill. 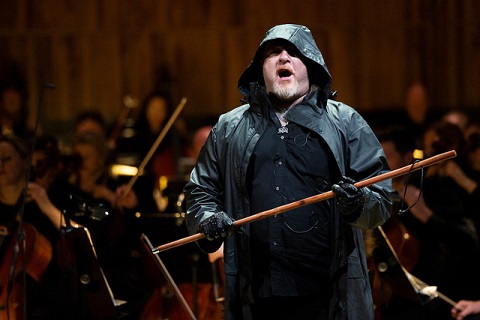 Fafner – literally, and somewhat appropriately as it happens given where
this dragon rests – was sung cavernously by Brindley Sherratt. For some
reason (heaven knows why) he was represented as a cobra. If his slaying
seemed more memorable for Sherratt’s voice and the power of the orchestra
than Kerl’s Siegfried, this was, I suppose, because the scene can seem like
farce. Only when Sherratt warned Siegfried of the treachery of Mime did it
seem to rise above that. Robert Hayward’s Alberich in his scene with Wotan
veered between submission and triumph, a polarity of power culminating in a
magnificent Curse. If Nitikin’s Wotan had the weight to tower over Hayward
in the early part of their scene Hayward would turn the balance to his
favour – the voice becoming dark and menacing.

Turning to the female roles, Alina Adamski’s Woodbird was slightly darker
in tone than one usually hears. The notes were there, almost in robust
fashion, but when compared to the rather small birds flying on the screen
behind her she seemed outsized. Anna Larsen’s Erda was majestic. There is,
of course, no comedy here and the richness and plushness of Larsen’s mezzo
betrayed all the seriousness of her earthiness.

Initially, Elena Pankratova’s Br¸nnhilde somewhat nerved me since it
appeared she needed a music stand for her very long scene with Siegfried –
and she did indeed flip pages here and there, though evidently she never
actually looked at them. But it was a distraction. Having said that, as
Br¸nnhilde wakes, which Pankratova managed with a certain amount of
tension, and hails the light – held with the penetrating sharpness of a
blazing ray from the sun – and asks who has awaken her, it becomes evident
that hers is a powerful and thrilling instrument. The notes are mostly
there (a high C astray once) this is a voice that rides effortlessly above
the orchestra. As she recalls Grane, her shield and her armour it is not so
much a literal reading of the libretto but a transfiguration of a soprano
who can bring meaning to them as we listen to her. If her Siegfried in
Torsten Kerl doesn’t exactly swell with the passion of their love,
Pankratova expresses the ardour of it with the freshness of someone who has
awakened to a new discovery. It’s the case of a soprano who effortlessly
soars her emotions and a heldentenor who struggles to express what he
feels. 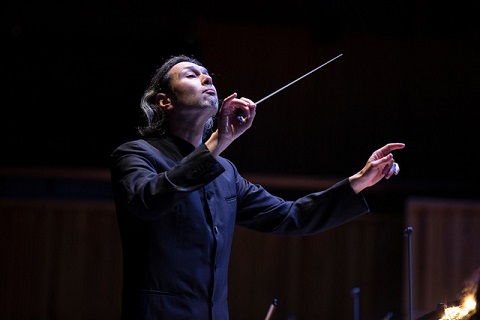 If this concert production really achieved a level of true greatness it was
provided by the London Philharmonic Orchestra and Vladimir Jurowski. The
playing of the orchestra was simply staggering. They opened the first act
in complete darkness, then a single light shining on the woodwind. Almost
the first thing one notices is that there are no risers (except for the
last desks of the violins) – a masterful stroke because the sound we get
from the orchestra is completely luminous, every phrase and detail crystal
clear. The sound that emerges from the double basses – arranged across the
back of the orchestra – is as full as you could want, even when playing at pianissimo. Jurowski’s tendency to linger – mostly during the
orchestral music – might be problematic, but it actually isn’t. The effect
is loving, as if he is caressing the score, teasing music from it, allowing
solos to emerge like voices. In every sense this is a true operatic
orchestra and Jurowski’s mastery of the score absolutely complete.

The opening of Act III might have felt slightly weightier, less visceral
than in some performances I have heard, but it swirled majestically – to an
accompanying Blitzkrieg on the screen behind the orchestra. Some of the
music during the Br¸nnhilde – Siegfried scene was charged with an erotic
intensity that recalled Tristan. Those magnificent tubas could be
grotesque, or they could be magnetically dramatic, plunging us into
orchestral bleakness. The Forest Bird music transitioned into literal
shapes rather than sounds; the heft of the brass and strings during the
Fafner motif was exhilarating. John Ryan’s principal horn, moving to the
front of the stage during Siegfried’s horn call, was a sublime reminder of
the quality of this orchestra.

A slightly underpowered hero aside, this was a magnificent Siegfried and bodes well for the complete cycle to be performed
next year.

will take place at the Royal Festival Hall between 25th-31 st January and 5th-10th February 2021.